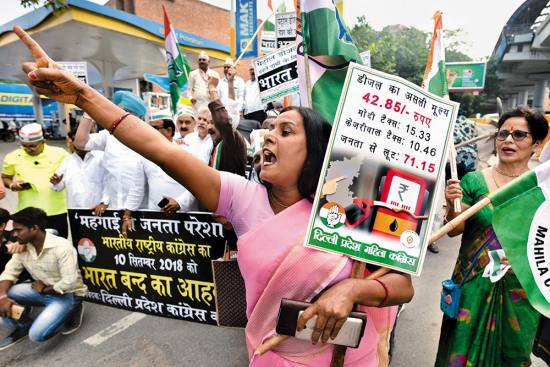 As the country braces for a gruelling election season, the Opposition called for a ‘Bharat Bandh’ on September 10 to pressure the gov­­e­r­nment over rising prices at petrol pumps.

Oil prices at home are the result of global prices and central and state taxes levied domestically. There has been extraordinary turbulence in these areas. World oil prices had reached a peak of $112 a barrel in 2014, before they began a precipitate fall, reaching below $30 in February 2016. This was due to a worldwide economic downturn and inc­reased US production due to the shale revolution, both of which led to an over-supplied market.

This finally compelled members of the Organisation of Petroleum-Exporting Countries (OPEC), led by Saudi Arabia, in late 2016, to work with major non-OPEC members, particularly Russia, to curtail production. Since early this year, oil prices have been going up steadily and have now stabilised at just over $75 a barrel.

This approach makes economic sense. Central and state taxes on petrol and diesel add over 90 per cent to the dealer price of oil,...