For political success, music is the mantra that Bapppi Lahiri chants 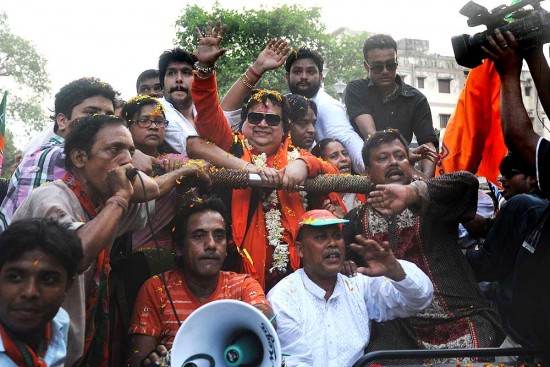 “BappiDA, ekta gaan hoyey jaak” (Bappida, let’s have a song), screams a fan from amidst the crowd that has gathered outside the Golden Inn Hotel in Dankuni, a small town in Srirampur constituency, from where Bappi Lahiri is contesting on a BJP ticket. It’s 4:45 in the afternoon and the pop musician has just emerged on the front steps of the hotel—a stopover venue—after a siesta. The morning had been spent in hectic campaigning in the sizzling summer heat. The gold chains around Bappi’s neck—his signature style—dazzle in the setting sun. He squints up through dark glasses—also an integral part of his persona—smiles and waves before being escorted to the waiting car. Politically speaking, Srira­mpur is decidedly Trinamool. Posters of sitting Trinamool MP Kalyan Bandyopadhyay and chief minister Mamata Banerjee fill up every imaginable surface. Graffiti urging voters to return Bandyopadhyay to Parliament hog most of the wall spaces. It’s no secret that Lahiri is up against a swelling tide.

But looking at the hordes of men, women and children pressing against his convoy as it creeps through the streets, just to catch a glimpse of him, it is difficult to believe that it won’t be a breeze for him. He himself has faith in his popularity. “Do you see how much they love me?” he replies, when we ask him the regular query, “What are your chances of winning?” One of the organisers, a BJP mem­ber, points out that “though for many, it’s the pull of a star that brings them, it’s not impossible that when they vote the fact that they have seen the superstar up close will play in their minds”.