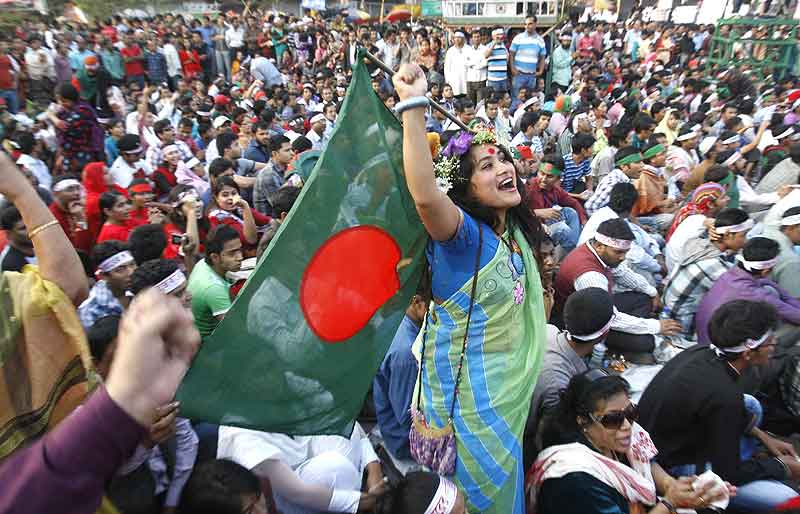 The scene at Shahbag Square—one of the busiest and most prominent areas of Dhaka, where thousands of young men and women have been demonstrating for over a fortnight—is familiar. It is reminiscent of recent agitations at New Delhi’s India Gate, or more famously of Cairo’s cradle of revolution, Tahrir Square. The young demonstrators want Shahbag to be rechristened as ‘Projonmo Chottor’—the ‘square of the new generation’. The atmosphere is electric; yet there is a festive mood to it. Nationalist songs are blared from speakers, cries of ‘Joi Bangla’, the popular war cry of young ‘muktijoddhas’ (liberation fighters) of 1971, rent the air.

But even after four decades, the wounds of Bangladesh’s liberation war have not healed. Bangladeshi society is still divided—or at least large sections of it—on who did what during the bloody confusion of the liberation struggle. To a large extent, the collective angst is directed against the Jamaat-e-Islami, the Islamist party whose leaders not only opposed the breaking up of Pakistan—and hence went against the creation of Bangladesh—but allegedly played an active part in the rape, loot and butchery of their fellow citizens.

Thirteen leaders under suspicion of various crimes, most of them members of the Jamaat-e-Islami, are now on trial. While some have managed to flee the country, others are now being tried. “People have been living with this wound for over 40 years, it needs to be healed,” says foreign minister of Bangladesh Dipu Moni.

The thousands at Shahbag agree with her. Except, for them the wounds can be conclusively healed only if the guilty are punished with a death penalty; anything short of that is non-negotiable. But the International Crimes Tribunal—the body of judges set up by the Awami League government of Sheikh Hasina last year to look into charges of war crimes—awarded a life sentence to one of the accused, Abdul Qader Mollah on February 5. The judgement outraged a large number of Bangladeshis, who felt the charges against Mollah were ‘irrefutable’ and that he should have been given a harsher penalty. It sparked off the mass protests at Shahbag Square. When he came out of the courtroom flashing a vic­tory sign to supporters, it only incensed people further. Soc­ial media in Bangladesh went viral, registering the popular mood of outrage.

On February 15, when a popular blogger and vocal critic of the Jamaat, Ahmed Rajib Haider, was brutally murdered, it did not take long for thousands more to gather at Shahbag to vent their anger at the killing, the judgement and the activities of the Jamaat.

Though demonstrations have continued at Shahbag for over a fortnight, no one is quite sure how it will end. What was being seen initially as a spontaneous outpouring of outrage, is now being described as instigated by the ruling party. The government’s decision to bring in an amendment in parliament—after gauging the angry mood at Shahbag—giving it the chance to appeal against the tribunal’s judgement as well as to ban outfits like the Jamaat, has only strengthened such views.

The amendment has raised serious questions about the government’s mot­ives and the tribunal’s legitimacy. The decision to set it up was part of Sheikh Hasina’s electoral promise. But the ICT has run into a series of controversies since the start. A number of judges in the tribunal have resigned and new members have been brought in to replace them, leading to more  doubts on fair justice and its effectiveness. The government’s latest move further weakens its independence.

Senior cabinet ministers and key functionaries of the Awami League claim that the government had consulted inter­national experts and exchanged ideas with countries that set up similar tribunals to look into war crimes before setting up the ICT. Another 10 people, including two from the BNP, are awaiting trial by the tribunal.

“The trials are conducted in an absolutely free and fair manner and according to international law,” Shafique Ahmed, Bangladesh’s law minister told Outlook. Others dispute this claim. A series of criticisms, especially from some western countries, has only made the government more determined to have its way.

“Irrespective of attempts to scuttle the trials we are determined to bring it to its logical conclusion,” says agriculture minister Matia Chowdhury, a confidante of Sheikh Hasina, summing up the government’s uncompromising mood.

In private, Awami League leaders admit the completion of the war crime trials would win them another term.

Few would dispute that the trials have a popular resonance among Bangladeshis—at least those in urban centres. However, many of them also say the trials are being manipulated with cold, political calculations in mind. The Jamaat is an electoral ally of the Bangladesh Nationalist Party (BNP), the main opposition. The Islamists, though cornered at the time of the liberation, have managed to expand their influence in the past 40 years. Various political parties, including the Awami League, have hobnobbed with the Jamaat in the past. Some political analysts say that the Jamaat can play a decisive role in at least one-third of the 345 seats in the Jatiyo Sangsad—the parliament. The trial of the Jamaat leaders and a possible subsequent banning of the outfit can help the Awami League to weaken its main rival, the BNP, considerably. “It has now become a political trial rather than a judicial one,” rues BNP leader Amir Khosru M. Chowdhury.

Predictably, the Jamaat-e-Islami ref­utes the charges against its leaders and raises questions about the fairness of the trial. But it maintains that even if the verdict of the tribunal went against its leaders, it would only be a temporary setback. “The Jamaat-e-Islami is a historical movement. Even if the decision goes against us, the organisation will remain,” says leader Abdur Razzak.

In private, Awami League leaders acknowledge the importance of the trials and make no bones in saying its completion will surely win Hasina anot­her term. But the parliamentary election, due later this year, will lose much of its credibility if the BNP dec­ides to boycott it. The party says it will not participate unless elections are held under a caretaker government.

The developments in Bangladesh are of serious concern to New Delhi, as a long spell of violence and political instability there is likely to have an adverse impact on India. During his recent visit to Dhaka, Union foreign minister Salman Khurshid tried to tell the Awami League and BNP leaders that a peaceful, prosperous Bangladesh was in India’s interest. President Pranab Mukherjee is also due to visit the country early next month and is likely to make the same point. As the trial and its outcome continue to chart its cycle  of expectation, disappointment, denial and mass outrage, peace and stability may take a while before returning to Bangladesh.

By Pranay Sharma in Dhaka and New Delhi