Call It A Frame-Up

Savarkar gets a place in Parliament, but not before polarising the polity 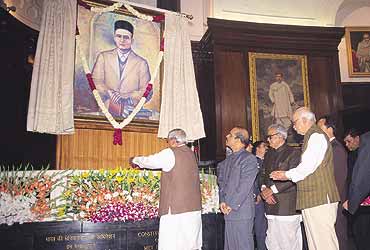 outlookindia.com
-0001-11-30T00:00:00+0553
History invariably evokes political passions. So, it is only surprising that a meeting of the parliamentary joint committee on December 5 last year, to decide on the installation of portraits and statues, passed without a murmur. Generally, that is how such meetings go—MPs drop their hostility to work together informally. But it's only now that the Opposition is realising—rather late in the day—what a chance it foolishly missed: the meeting, chaired by speaker Manohar Joshi, had approved the unveiling of a portrait of Hindutva hero Veer Savarkar in Parliament's Central Hall with an entire Opposition phalanx nodding in agreement (or slumber).

The bomb, however, hadn't been defused, only the explosion deferred. On February 26, the day the speaker's order was about to be implemented, all hell broke loose. The Opposition suddenly woke up to Savarkar's dubious credentials. Co-conspirator in the assassination of Mahatma Gandhi (though acquitted for want of direct evidence), the original theorist of Hindutva, a leading light of the Hindu Mahasabha, the co-founder of the rss in 1925, a supporter of Jinnah's two-nation theory, a British collaborator like the Muslim League, a frequent clemency-seeker grovelling before the Royal Imperial British government to escape incarceration. Savarkar stood exposed, yet again. To keep Savarkar's portrait—accused No. 7 in the Gandhi assassination case—alongside the Mahatma was the ultimate sacrilege.

To make up for their dismal show at the December 5 meeting, the Opposition decided to boycott the function and urged the president to 'reconsider' his decision to unveil the portrait. Sonia Gandhi wrote to the president saying that the boycott wasn't meant to disrespect Rashtrapati Bhavan, but "Savarkar's petition seeking mercy from the British, his advocacy of the two-nation theory and his alleged association with Mahatma Gandhi's assassins makes it extremely inappropriate that his portrait be put up in the same precincts as those of freedom fighters."

CPI(M) veteran Somnath Chatterjee, who was present at the crucial meeting which cleared the portrait's installation, expressed regret. "It was a big mistake. I should have been more strident in my protest (to the unveiling)." The two Congressmen present, Shivraj Patil and Pranab Mukerjee, preferred not to explain their position and went underground. Congress leaders Mani Shankar Aiyer, Arjun Singh and Natwar Singh questioned their wisdom at a meeting saying that the "party position had been compromised". Mulayam Singh Yadav said he was deliberately misled.

In an open letter, BJP's UP ally bsp also raised objections. Politicians from across the spectrum—CPI(M), CPI, RSP, Forward Bloc, SP, IUML and Janata Dal—explained the boycott arguing that their association with the function "will give credibility to the activities and divisive policies of V.D. Savarkar".

Freedom fighters too joined in. Historian Bipan Chandra quoted Savarkar's letters of clemency in 1911: "If the government in their manifold beneficence and mercy releases me, I for one can't be but the staunchest advocate of constitutional progress and loyalty to the British government...".

The BJP seemed prepared for the avalanche of criticism. While no one from the Opposition was present at the function inaugurated by the PM (except for Rajya Sabha vice-chairman Najma Heptullah, whose presence has embarrassed the Congress), it had top BJP and a number of NDA representatives in attendance. Sushma Swaraj said it was unfair that after agreeing to the idea, the Opposition was backtracking. According to BJP spokesman V.K. Malhotra, the reaction was a "clear case of afterthought". Seshadri Chari, editor of Organiser, said the controversy is "typically leftist, illogical and unpatriotic, in which the Congress has joined them.... Savarkar's clemency petitions were the result of this strategy, which he worked out after he saw the protest of fellow prisoner, Jitendranath Dass, who fasted unto death.... Savarkar considered such acts as a folly, especially when the life of such people are necessary for loftier deeds for greater national good".

So, the parivar has managed to put up one of its icons in Parliament—an unthinkable act till a few years ago.