'Calcutta Robbed Me Of Words, I Was Mute'

The Nobel Prize winner on a range of topics from George Bush's crusade to the writer's flowering as an artist. 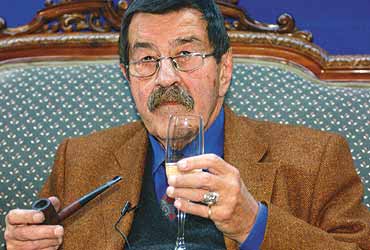 outlookindia.com
-0001-11-30T00:00:00+0553
Germany's and perhaps Europe's greatest living writer and impassioned chronicler of his encounter with India, Nobel Prize winner Gunter Grass turned 75 last month. The north German Hanseatic town Luebeck celebrated Grass' birthday by inaugurating the Gunter Grass House which preserves and exhibits the writer's manuscripts, drawings and sculptures. Grass-watchers gathered for an international symposium to discuss his literary and artistic achievements as well as his political engagement. Subhoranjan Dasgupta, a participant in the seminar, spoke with Grass on a range of topics extending from George Bush's crusade to the writer's flowering as an artist. Excerpts from the interview:

Mr Grass, what is your impression of President George Bush?
I regard this man as a danger, a threat to world peace. He reminds me of one of those characters in Shakespeare's historical plays whose only ambition perhaps is to stand before his father, the old and departed king, and say, 'Look, I have completed your task.' He is determined to bring the first Gulf War to its culmination by launching yet another. Bush Jr is inspired by private, family reasons; he is prompted by hereditary compulsions. The economic interests of the Bush family are also playing a role. The family is deeply involved in the oil business. Political interests and business aspirations, therefore, are finely enmeshed in his war cry against Iraq. The third reason is, of course, the usa's status as the only Almighty Superpower in the world. The superpower wants to control and direct the rest of the world but it knows so little about the rest of this world. It knows almost nothing. This dangerous combination of familial, economic and political interests in this single leader has turned him into a real danger.

Does this visible alliance of economic and political interests point towards a close connection between neo-liberalism and the so-called fight against terrorism?
Certainly. Immediately after that terrible onslaught on September 11, I stressed that the source of this assault lies embedded in the rage and hatred of the so-called Third World against the affluent First. Unless and until we eradicate the causes of this deep-seated, justified anger, terrorism will continue. Way back in the '70s, German statesman Willy Brandt drew our attention repeatedly to the horrible inequality scarring the earth, this deep divide between the haves and have-nots. He predicted that if we fail to establish a just new world economic order, violence will erupt. That violence, in the form of terrorism, is afflicting us now. There are of course several other reasons—cultural, regional, historical etc—but the main reason, shocking disparity, should not be undervalued.

I dream of a world order where the developed and developing countries will share the same table and also share the world's resources, technology and capital in the most equitable manner. As long as this dream remains merely a dream, world peace will be impossible to achieve. Who is responsible for this mess? The North and the West. We in the affluent world have failed repeatedly and deliberately because we have protected our limited interests at the expense of others. This self-centred attitude, this business of enriching oneself is of course a product of neo-liberal theory and practice which refuses to look beyond its nose. It follows that if Bush repeats his Afghanistan experiment in another part of the world, he will be encouraging another new wave of terrorism, he will be sponsoring another generation of terrorists.

You seem to brand the present nature of capitalism as a major culprit?
Of course. After the fall of socialism, capitalism is left without a rival. And in this extraordinary situation it has emerged as an avaricious, above all suicidal force, bent on destroying itself.It thinks that it can get away with any and everything. What now transpires in the stockmarket is nothing more than destruction of capital. And along with it the destruction of employment, workplace and human resources. When a firm announces that it is going to slash 200 jobs, its share value jumps. This is madness. The present form of market-blind capitalism has spawned its own enemy, its own Frankenstein. This system could collapse one day. We don't have an alternative now nor do we know if we'll have one in the near future. In a state of big, depressing vacuum, we may have to experience a new form of fascism, whose face we are not able to envisage now. We can see traces though.

I don't believe in any limitless, hope-resplendent utopia; that is why I will not posit any utopia as antithesis. What I can say is that we have to try and try against the present scheme of things. The stone of Sisyphus has to be rolled up again and again.

The Gunter Grass House concentrates not only on your evolution as poet and novelist but also on Grass, the artist and sculptor. Is Grass the writer inextricably connected with Grass the artist or is the artist autonomous and independent?
A steady and continuing relationship of exchange between the word and the line characterises my creativity. The first instance of such coexistence is, of course, my poetry. Would you believe that the source of many of my lyrics is drawing and design. The first flutter of the lyric I often transcribed in drawings which later gradually took the form of words. Thereafter, the lyric and drawing reinforced and enriched each other, and they dwell side by side in my books of poems. The opposite has also taken place—often I have begun with words and then the words merged into drawings.

This alliance of words and art is visible in my prose as well, in novels like The Rat and A Wide Field, in reminiscences like Show Your Tongue and My Century. When I write, the manuscript does not remain confined to words. I break the flow with drawings, designs, figures. In fact, I visualise the constellation of events and characters in my novels with these pictures. These drawings and pictures, with the progress of time, free themselves from the word-scattered pages. Following laborious interventions, these turn into self-reliant lithography, water colours, drawings and in, some cases, even sculptures. So the relation between the artist and the writer operates at two levels—in the first phase, at the level of interdependence and mutual enrichment, and then at the level of artistic autonomy.

There are a few exhibits of your Calcutta-India phase in the Gunter Grass House. When will we see a more comprehensive view of this phase?
Well, this inaugural exhibition should be regarded as a chronological overview of what I have done from the beginning till the present day. In the future, we shall concentrate on the different creative phases separately. I must confess that my first prolonged encounter with Calcutta robbed me of my words. I turned mute. My silence was the reaction of a closeted West European caught in the vortex of Calcutta for the first time. The contrast was so immense, so bewildering between the world I had left behind and the world I entered that my words failed to capture the difference. At that moment of wordlessness, I began to sketch Calcutta. My sketches, a crucial part of Show Your Tongue, led gradually to words. In that sense, I cherish the Calcutta drawings as something very special and revealing.

Will you come to Calcutta again?
I dream of Calcutta often. It is a steady theme in my thoughts. I am now 75 years old. If I can manage to find the time and strength, I shall certainly come again. I long to come for a short while.Calcutta-Dhaka-India-Bangladesh-Bengalis-Subhas Bose, I am tied to this sphere intensely. From The Flounder to My Century, Calcutta and Bengalis have been present in my work in several ways. Zunge Zeigen is devoted to Calcutta and the protagonist in Call of The Toad is a Bengali whose name is Subhas Chandra Chatterjee. This theme, so close to my heart, in another shape or colour, could come back to my texts again.

Many in Germany and Europe would like to regard you as the conscience of post-war Germany, especially after the death of Heinrich Boll...
No, it would be totally wrong to regard me as that. Like Boll, I have always rejected this idea of appearing as the conscience-figure of my people. Tell me, whose burden of conscience could I possibly carry; whose conscience could I endeavour to clear or relieve? As an aware citizen of Germany and as a writer, I associate myself with the trials and travails of my society, with its advance or regress. Based on my experience and political principles, I either support certain happenings and processes or I voice my protest. Whenever there is a major political debate, I take a position. Well, this engagement or, if you prefer that term, activism, I have always practiced. I shall practise this in the future as well. To that extent, I do not encourage or endorse the 'I myself' preoccupation of those creative writers who deliberately distance themselves from their social conditions. But that does not mean that I embody the conscience of someone else. I reject any such representative role.