Calcutta: One Saintly Morning, 26 Years Ago

That encounter with Mother Teresa changed my whole life and worldview 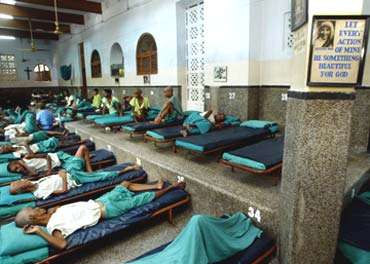 outlookindia.com
-0001-11-30T00:00:00+0553
The place was called Nirmal Hriday, Home of the Pure Heart. It used to be a Hindu pilgrims’ home and it was located right next to the Kalighat temple in Calcutta. In between the rows of beds in a big room, there was an old, wrinkled woman dressed in a white cotton sari bordered with blue. She had a soup bowl in one hand and a spoon in the other. She was feeding an old, extremely skinny man, who looked more like a cadaver than a living human being. The police had picked him on the street that morning, and brought him to the Home of the Pure Heart. The old woman was speaking words of comfort and love to him as she put one spoonful after another in his mouth. I moved closer towards this scene on the tips of my toes. I could now see the eyes of the old man, so full of gratitude. He had certainly never been attended to in this way in the course of his miserable life. And then, suddenly, the old woman sensed my presence behind her. She turned around abruptly and handed over to me the bowl of soup and the spoon. "Continue to feed him!" she ordered. "And love him," she added, before walking away. That’s how, one morning, 26 years ago, I met Mother Teresa. This encounter was going to change my life.

I had come to Calcutta after the world publication of my bestselling book, Freedom at Midnight, which I had written with Larry Collins. I wanted to show my gratitude to the Indian people for the beautiful hospitality I had received in this country during my years of research. I thought that in this enormous city, overcrowded with poor refugees of all kinds, I would be sure to find an opportunity to share my book’s royalties with some charitable organisation. And here I was, feeding a destitute in one of the homes founded by the woman who had become the world’s greatest symbol of charity.

That same evening, Mother Teresa introduced me and my wife (also named Dominique) to an Englishman who had dedicated his life since 1970 to children suffering from leprosy, from some of the poorest colonies of the city. His name is James Stevens. He had been a wealthy haberdasher in London, before devoting all his financial resources to opening a home in Barrackpore to rescue, cure, educate and train young boys and girls afflicted with leprosy. He called his home ‘Udayan’—Resurrection. When I met him, he had run out of money to support this island of hope in the midst of the most abject poverty. I handed over to him the royalties I had brought from France, and told him, "James, you will never close your home, Udayan." I also made an extravagant promise to Mother Teresa. And that is how, for the last 26 years, my beloved India has given me the opportunity to share the royalties from my books and donations from readers with the less fortunate inhabitants of Calcutta—a city I have learned to love so much that I planted within its walls the story of one of my most successful books, The City of Joy. This book, which sold nine million copies in over 40 languages and was made into a $40 million film with Patrick Swayze as its star, gave me the possibility to multiply my humanitarian actions for the benefit of millions of have-nots, whom ‘India Shining’ has yet to rehabilitate and offer hope of a decent future.

In these last 26 years of work with some marvellous ngos that Dominique and I are lucky to be associated with (abc, bpbs, cipoda, hsp, icod, shis, ubs, Udayan are only some of them), we have contributed to rescuing and educating 10,000 children suffering from leprosy, and challenged with heavy physical and cerebral handicaps; to curing one million tuberculosis patients; to digging over 500 tubewells for clean drinking water; to teaching reading and writing to the women of 2,000 villages; to distributing microcredits to over 10,000 families...among other health, education, self-help and economic development programmes.

And, with four hospital boats, we bring medical supplies and relief to the isolated populations of 35 islands of the Sunderbans. Recently our boats have been on the frontline of the disaster of the Sidr Bangla cyclone. For all this work, the local population have made me ‘Benefactor of the Sunderbans’. Along with the title of ‘Citizen of Honour of Calcutta’, bestowed upon me in 1985 by the Municipal Corporation of Calcutta, these are certainly the most cherished awards I have received during my philanthropic and literary life.

I have called the association I have founded to support my many humanitarian causes in India ‘City of Joy Aid’. As the motto of this association, I have chosen the most beautiful proverb, which I learnt from the heroic people I met in the slums of Calcutta. The proverb which says: "All that is not given is lost."

French writer Dominique Lapierre’s books on India include Freedom at Midnight and City of Joy.