Cactus To The Kamala

Why is Yeddy keen on pushing a govt already on its deathbed? 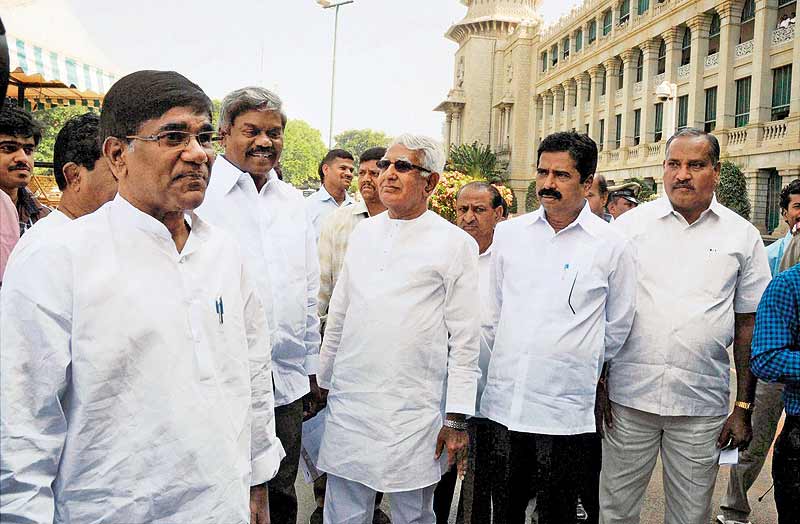 “It is like a cancer patient, terminally ill. It is also wanted for a heinous crime against the people. What’s the point of killing it when it will die shortly,” asks Ramesh Kumar, a co-panelist on a regional Kannada TV channel on the current political situation in Karnataka. If you take away the fact that Ramesh is a Congress leader and a former assembly speaker, his analogy fits the BJP’s first-ever government in the south like no other.

For all the promises with which it assumed power in May 2008, the BJP seems to have fallen prey to the very ‘I’ that was the undoing of the first-ever non-Congress experiment that the united Janata Party attempted in 1977, one which lasted less than two years. You could perhaps excuse that entity, given that the leaders involved were big and it was a first time. In the Karnataka of today, however, the ‘I’ belongs only to one man: B.S. Yediyurappa.

The once-CM has dictated terms to the BJP like no other leader of a national party, not even Y.S. Rajasekhara Reddy to the Congress in Andhra Pradesh. True, Yediyurappa campaigned like a man possessed. He openly cried at public meetings on the betrayal of JD(S)’s H.D. Kumaraswamy in the 20:20 coalition government, where 20:20 wasn’t any vision to govern but the bargain to hold the CM post for 20 months each.

He clearly scored a high in EQ (emotional quotient) when the major caste group he belongs to, the Lingayats, rallied around him and gave the BJP the closest-ever brush with power. The party won 110 seats when it needed 112 for a simple majority in a House of 224. So alluring was the scent of power that, in retrospect, it seems Yediyurappa had walked into the arms of a witch. Trying to make good the shortfall, he neatly fell into the hands of the mining barons, the Reddy brothers, and with their help, instituted an innovative lesson in sabotaging the anti-defection law of the country.

Appropriately dubbed ‘Operation Kamala’, it involved getting Congress and JD(S) MLAs to resign from the assembly and have them elected as BJP MLAs. That operation paved the way for several other acts of omission and commission, including one where the Reddy brothers organised the first revolt against the chief minister, all because they wanted officials of their choice to be posted in their district: Bellary.

To fight this scourge, Yediyurappa swung the other way to try and counter money power with money power. Unlike experienced Congressmen or even Janata Dal leaders who would not touch a file if a bureaucrat quoted a high court verdict to stymie an illegal proposal, Yeddy stuck to his guns. “I-am-saying-so” became the overwhelming rule rather than the exception, even in cabinet meetings. “We are greatly relieved today. We had a discussion in the cabinet,” a cabinet minister had said in a private conversation after Yediyurappa made Sadananda Gowda the CM.

Yeddy’s inexperience in administration, or for that matter, in raising funds for the party, came to the fore when he left behind documentary evidence, again unlike his predecessors in power. At one time, his was a government that had a scandal a day rolling out of its cupboards for close to two weeks. And, these were just the land scams. The mining scam was an altogether different story, so humungous in size that only the Supreme Court has been left to deal with it.

The illegitimacy of this government has now reached a stage where its own father wants to kill it. After divorcing himself from the BJP to float the Karnataka Janata Party last December, Yeddy wants the government to sink forthwith—today if possible. And pray what has CM Jagadish Shettar, whose name Yeddy himself had suggested, done to be removed? He did not yield to Yeddy’s diktats. That’s the reason Sadananda Gowda too was removed as CM when the party high command fell in line with Yeddy’s diktats solely because the Lingayat votebank lay with him. And being the party loyalists that they are, Shettar and Gowda obey party orders.

However, Yeddy’s problem is much more than a recalcitrant Shettar, it’s that he does not have the support of the 40-odd MLAs who were with him as long as he was with the BJP. Until they leave the BJP, Yeddy does not have the wherewithal to set up the organisational structure for KJP. And he knows too well how a cadre-based party like the BJP consolidates to deal with a renegade. Still, the ‘I’ in him prevails, when it’s immaterial whether or not he can bring down the government in the next few days. Elections are due in May or even earlier, and for a government already on a sick bed, does it really matter if it survives for the remainder of its term like it has done for the last four years and eight months?

(Imran Qureshi is a veteran Bangalore-based journalist who has worked both in print and electronic media.)

The Point Of Incision