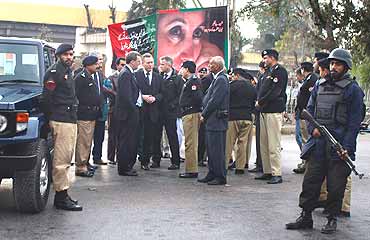 outlookindia.com
-0001-11-30T00:00:00+0553
The ghost of Benazir Bhutto continues to haunt distraught Pakistanis, prompting them to weave a web of conspiracy theories to explain the assassination of their leader. But those investigating the killing feel rogue elements within the establishment in league with religious extremists may have pooled their resources to plan it, may have even rehearsed the attack outside Rawalpindi's Liaqat Bagh, the place where Benazir was ultimately gunned down on December 27. They say a banned jehadi organisation provided a suicide bomber and a sharpshooter while a group based in Waziristan gave logistical support in what is increasingly being perceived as a joint venture to assassinate the former prime minister.

Investigators say the shooter and the suicide bomber merged into the crowd surrounding Benazir, taking advantage of the poor security at the venue. When the vehicle ferrying her was about 70 ft from Liaqat Bagh's VIP gate, the gunman opened fire. Minutes earlier, Benazir had asked for the vehicle's sunroof to be withdrawn so that she could stand up and wave to her supporters. That only made the assassin's task easier, injuring her fatally on the third attempt. Benazir collapsed into the vehicle; seconds later, the suicide bomber exploded himself.

Investigators say that even if Benazir had survived the gunshots, the sheer intensity of the blast would have blown her head off or at least inflicted severe wounds. This theory gives a lie to the claims of those who say she died because the intensity of the explosion caused her to smash her head against the sunroof lever of the armoured vehicle.

Investigators have reportedly found a hole in Benazir's scarf, reinforcing the fact that she died of a gunshot wound. The bullet apparently grazed the side of her skull and subsequently lodged itself into a traffic signpost in the vicinity. "Her skull had cracked instantly," said one of the investigators. "The 7.63 mm pistol found at the crime scene indicates she was shot dead." The investigators appear convinced that the suicide bomber was sent to eliminate the shooter and obliterate evidence of his crime. 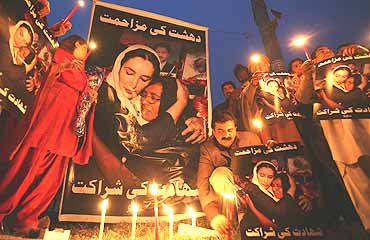 Long live... A candlelight vigil for the slain Benazir

Some investigators, however, feel it wasn't a suicide bomber but a bomb planted at the venue and set off by a remote-control device that triggered the explosion at the Bagh. This claim is made on the basis that the purported suicide bomber's legs were missing. In suicide attacks, the bomber is either decapitated or his head is destroyed because he wraps explosive materials around him from belly button on to the upper chest. Suicide bomber or not, the intent of those who wanted to eliminate Benazir was to ensure the gunman's role in the crime remained hidden.

All explosions yield a variety of clues to the type of explosives used and the trigger devices employed. These are usually deemed vital to establish the possible identity of groups involved. Inexplicably, hours after Benazir was killed, authorities pressed in fire brigades to wash the crime scene, spawning theories about the establishment's role. PPP leaders have repeatedly asked: what was the great hurry to hose down the area the same evening instead of cordoning it off as is standard procedure in any criminal investigation anywhere?

Allegations of official complicity in the Benazir murder have been haunting the Musharraf regime since December 27. The PPP leadership points out that the Musharraf administration had named Benazir's killers even before the investigation began. In his televised address to the nation on January 2, 2008, Musharraf requested the Scotland Yard to help Pakistani investigators in identifying the culprits but simultaneously accused Baitullah Mehsud and Maulana Fazlullah of masterminding the assassination. 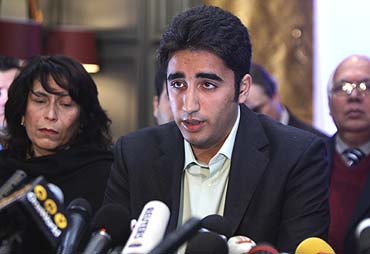 Mehsud was quick to issue denials. His spokesman, Maulvi Omar, said, "Why on earth would we kill her? We had no enmity with her and, more importantly, she had done us no wrong.... By blaming us for the murder of Benazir, Musharraf is attempting to portray the tribal areas as terrorists' centres and earn dollars from (his) Western masters."

The Musharraf regime has tied itself up in knots over the case. Barely 24 hours after her murder, interior ministry spokesman, Brig (retd) Javed Iqbal Cheema, tried to promote the theory that Benazir died because she had smashed her head against the sunroof lever. This could well have become the official version of the assassination had a host of TV channels not released chilling images of the armed assassin firing at Benazir seconds before the explosion. It was only then that an embarrassed Musharraf sought Scotland Yard's aid in the probe.

PPP leaders and senior police officials in Islamabad, though, doubt whether the Yard team can produce results. "They'll come and ask two things—do you have a post-mortem report and do you know the cause of death?" a police official said. "They'll ask for a detailed post-mortem report and we don't have any." Besides, Yard is only assisting the Pakistani investigation, not conducting an independent probe as was the case with Mir Murtaza Bhutto's murder in Karachi in 1996 or the 1956 assassination of premier Liaqat Ali Khan. Even in those cases, the Yard wasn't able to present its report.

Nor will the foreign detectives be allowed to interrogate the two people Benazir named as her would-be assassins—Intelligence Bureau chief Brig Ejaz Shah and Punjab chief minister Pervez Elahi. The British team has only been allowed to examine the evidence already collected, interview the police officials on duty that day and the doctors who attended to Benazir. Interestingly, the British team held a long meeting with Musharraf in Islamabad on Tuesday, prompting many to ask: can a fair probe be expected?

The contradictory voices in which the Musharraf regime has spoken has prompted the PPP to demand a United Nations probe. The party has formally contacted Fabrice Aidan, assistant to the special envoy to the UN secretary-general, to try to present the Benazir assassination case to the world body. Benazir's lawyer Farooq H. Naik will leave for Washington shortly to register the PPP request with the UN secretary-general. "The main reason we're approaching the UN is the distrust and lack of credibility of the Musharraf regime, and we will prove it," says Naik. "We'll try to include every possible document about the assassination of Benazir Bhutto to convince the UN secretary-general to order an independent international probe...."