The case for rationalising college fees again raises its head 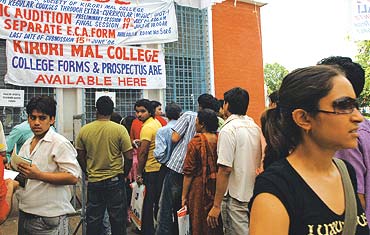 "We are creating an HR asset here...fees are too small a contribution in a university's upkeep." M. Anandakrishnan, MIDS

"How do you determine who the rich are? There can be no substitute to public funding." Narendra Jadhav, Pune University V-C

"Students paying more will feel they have more rights. It is anti-democratic in nature." Prabhat Patnaik, JNU professor

"In principle, I agree with different fee structures. What is wrong with it? There has to be a fee hike." Sam Pitroda, Knowledge Commission Chairman

A fairly reasonable case, one would imagine, for upping tuition fees for rich students in cash-strapped Indian universities. In fact, most educational institutions have often cited paucity of funds as an excuse for their inability to spend on infrastructure, pay good salaries to teaching staff, or generally improve standards of higher education. So, the argument goes, if public school students pay about Rs 4,000 every quarter as fees, is it too much to expect them to continue paying the same for university education? In fact, some schools in the metros charge students as much as Rs 7,000 per month. This stands in sharp contrast to the Rs 20 per month fees demanded by government-funded colleges.

In the last 20 years, any effort to revise the fee structure has met with strong political opposition. But the tax-the-rich votaries have a strong argument now—a differential fee structure will enable cross-subsidisation and help the socially disadvantaged sections of society. The Planning Commission paper says the fee structure can be gradually raised by 20 per cent in existing universities while in new institutions it could be immediately implemented with scholarship provisions for poor students.

Commission member Bhalchandra Mungekar is the prime mover of the differential fee structure for public school alumni. Mungekar argues that the money recovered from such students could be ploughed back into the university to make provisions for the backward sections of the society. "We have not fulfilled any of the promises we made to the underprivileged in the past," he says as a reminder.

Mungekar's proposal has its share of supporters and critics. There are some who argue that fees form just a small proportion of investible funds—what is actually required is a larger allocation from the State, which has of late been carefully distancing itself from bankrolling higher education—leaving the door open for private players who have arbitrary fee structures out of reach for the common man. Others feel those who can afford higher fees should not be provided subsidised education.

The iconic Sam Pitroda, chairman, Knowledge Commission, supports a differential fee structure as well as an overall fee hike. "In principle, I agree with different fee structures. What is wrong with it? If Delhi University charged Rs 15 in the '70s and continues to do the same now, there is something fundamentally wrong with the education system in the country. There has to be a fee hike," says Pitroda. But he's also quick to temper this with a credible scholarship system that subsidises higher education for the poor.

The Knowledge Commission, in its report, has mapped the challenges that confront higher education in India. Close to 1,500 universities would have to be set up nationwide to enable India to attain a gross enrolment ratio of at least 15 per cent by 2015. Today, the proportion of the 18-24 age group that enters higher education is around seven per cent as compared to 20 per cent in most other developing countries. India has only 361 universities, grossly inadequate when one compares it to China which has okayed the setting up of 1,250 new universities in the last three years.

The differential fee structure scheme, though, has a fair share of sceptics. Pune University vice-chancellor Narendra Jadhav says the proposal is fraught with legal complications. "How does one determine who the rich are? There could also be a situation where people fudge certificates. It will open a Pandora's box. I think what is important is targeting the people you want to bring education to. Any kind of subsidy implies making the benefits available to the real needy. Also, there can be no substitute to public funding."

There are other sides to the issue too. Prabhat Patnaik, professor at JNU and currently on deputation to the Kerala State Planning Board, says, "Those who pay more would feel they have more rights than those who pay less. It's anti-democratic in nature. On the other hand, if you give scholarships to the less privileged, it becomes a feather in their cap." Patnaik also believes that an increase in fees adds little to the resources for higher education. In fact, he favours taxing the rich at the national level. "Why don't we have cross-subsidisation at the national level, raise taxes from the rich if we really want to subsidise the poor," says Patnaik.

Which is why M. Anandakrishnan of the Madras Institute of Development Studies says, ideally, there should be no tuition fees. "We are creating a human resource asset in the country and fees are too small a contribution towards a university's upkeep," he says. Also, he cautions, the standards of government-aided schools are forcing people from all walks of life to send their children to public schools. It would be unfair to assume only the rich go to public schools.

The Oversight Committee set up by the Centre to recommend the roadmap for expansion of colleges in the light of 27 per cent OBC reservation has envisaged an expenditure of Rs 17,27,022 crore over the next five years. Such a massive outlay would essentially mean state funding. But if a differential fee structure and hike can cover 20 per cent of operational costs, it would lessen the day-to-day burden on the state exchequer.