By The Roadside Fire

A youth full of Bronte, Stevenson, the diarists, and warmed by Dickens 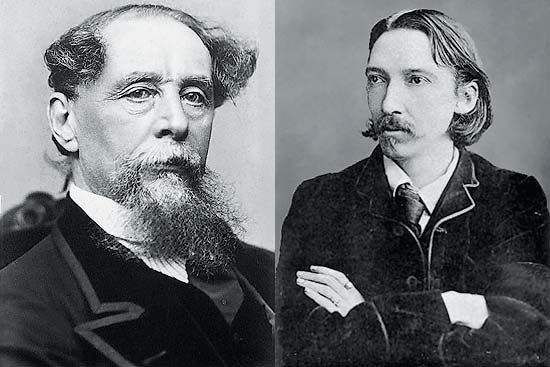 When I look back over the years to the books I have loved, and to which I turn to again and again, I find that it is those which have been written with passion and intensity, rather than literary finesse, that continue to exert their spell over me.

I still have my copy of the The Story of My Heart by Richard Jefferies, which I bought second-hand in 1956. It’s the Penguin Illustrated Classic published twenty years earlier, with beautiful wood engravings by Gertrude Hermes. Although I have read it several times, it is still in fairly good condition as I keep repairing it with glue sticks and sellotape. 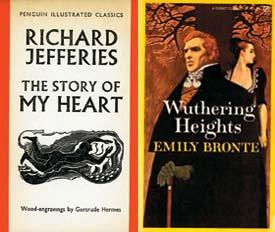 Jefferies, naturalist and gamekeeper, died young, but not before he had paid lasting tribute to the world of nat­ure that surrounded him. A true pagan, he responded in the most sensual way to every breath of wind, blade of grass, leaf-bud, raindrop, sunbeam or creature of the wild. It is a record not just of the natural world, but of his spiritual development. Across the years, he speaks to me: “Give me life strong and full as the brimming ocean; give me thoughts wide as its plain; give me a soul beyond these...sweet is the bitter sea, and the clear green in which the gaze seeks the soul, looking through the glass into itself. The sea thinks for me as I listen and ponder; the sea thinks, and every boom of the wave repeats my prayer.”

Jefferies wrote The Story of My Heart in 1883, in the heightened consciousness that sometimes comes to consumptives. It was a period in his life of poetic and mystic vision, and he wrote in great poverty until the end came. A deeply spiritual person, he was considered an atheist by his contemporaries because he believed in a life-force greater than a deity.

Another consumptive who died young was Emily Bronte (1818-1848), who gave the world Wuthering Heights, probably the most passionately original novel in the English language. I discovered it when I was twelve, spending the night in a leaking room in a house that was badly in need of repair. A storm raged outside; the lights had gone out; but I had a kerosene lamp. Just the right atmosphere in which to read this haunting epic of star-crossed lovers. I stayed up till three in the morning to finish the book. By then the storm was over, but the power of the writing was to remain with me for the rest of my life.

Last winter, after a gap of sixty-five years, I picked up Wuthering Heights again. Would it have the same hold over me? Or had I grown out of a tale of love, hate, longing and enchantment? Obviously I had not, for once again I was up all night, gripped by this haunting and lyrical tale of yearning and desire played out on the desolate Yorkshire moors. Catherine and Heathcliff yearn for union with each other but it is always denied. Just as Emily Bronte’s yearning for love and fulfilment finds exp­ression in this tale of her own frustration. Of your frustration and of mine, which is what gives it such a universal appeal. Emily’s anguish is repeatedly expressed in her poems, which should be read by anyone who loves her work: “There have been times I cannot hide,/There have been times when this was drear,/When my sad soul forgot its pride,/And longed for one to love me here.”

In a dark, leaky house, I read Wuthering Heights by lamplight in a single sitting, as a storm raged outside. Its power was to remain with me forever.

A poet and a consumptive, who was also a man of act­ion and who to a great ext­ent overcame his inf­i­r­mities, was Robert Louis Stevenson (1850-1894). And I take this opportunity to pay him tribute and touch his feet, for he influenced me in more ways than one—as story-teller, personality and citizen of the world. His wanderings took him across Europe and the Americas, but he finally made his home in the South Seas. He was unique in that he wrote at least four classics, each in a different genre. There was Treasure Island, a boy’s adventure story; Dr Jekyll and Mr Hyde, a pioneering novella of horror and madness; Travels With A Donkey, a charming travelogue; and A Child’s Garden of Verses. These, and his other romances and tales of the South Seas put him among the immortals.

This tall, handsome and short-lived wanderer stands before me in his own beautiful lines: “And this shall be for music when no one else is near/The fine song for singing, the rare song to hear!/That only I remember, that only you admire,/Of the broad road that stretches, and the roadside fire.”

Three great writers died in their thirties or forties. Even Dickens, who was so prolific, worked himself to death at the age of 57. I grew up on David Copperfield, Nicholas Nickleby, Pickwick Papers, Great Expectations, Oliver Twist, and they were an important part of my own literary journey. I wish Dickens had kept a diary; it would have been of great and invaluable interest to a young writer.

Authors who did keep diaries or journals included Defoe (Journal of the Plague Year), Boswell (London Journal), Andre Gide, Virginia Woolf and Somerset Maugham. These writers told us a lot about themselves, especially Gide, for whom the journal was a confessional of sorts. I have also enjoyed reading those who were pure diarists, such as Samuel Pepys and John Evelyn, because they tell us so much about the world in which they lived. T.E. Lawrence’s Seven Pillars of Wisdom was not a journal, but a vivid and detailed description of the desert and the Arab revolt against the Turks. Lawrence was a controversial figure, but he wrote majestic English prose, every sentence sonorous, like an orchestra in full flower.

In my teens I read a lot of plays—Shakespeare, Shaw, Wilde, Barrie, Tagore, Saroyan—some of them, like J.M. Barrie, are out of fashion now. But I enjoyed the charm and sentimentality of his plays such as Dear Brutus, Mary Rose, A Kiss For Cinderella, and of course, Peter Pan. When I was in London (sixty years ago!) I went to a performance of Peter Pan (It is still put up every Christmas, I believe) and enjoyed it immensely. In order to save Tinker Bell, the audience was asked to clap their hands if they believed in fairies. Of course, I clapped my hands vigorously. And I still bel­ieve in fairies.

The Quest For Potter Luck