Mumbai’s khau galis have become collateral damage. And the city is all the poorer for it. 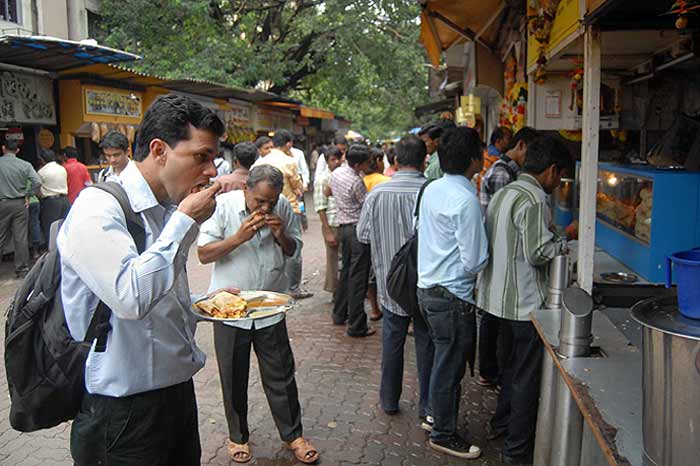 If the next time you saunter down to the Cross Maidan ‘khau gali’ (food alley) in Mumbai and begin to wonder whether you didn’t remember it to have been a great deal more congested, know that you are not alone in perceiving thus. Vendors say footfalls in the gali have fallen since the July 13 serial blasts when two of three bombs went off in similar khau galis at Zaveri Bazaar and Opera House. Straddled on either side by Mumbai’s major railway hubs—Churchgate and Chhattrapati Shivaji Terminus—the Cross Maidan khau gali attracts office-goers, college students, chauffeurs and peons from the bustling business districts nearby. The lane, barely 100 metres long with a variety of food stalls, juice stalls and ‘xerox’ outlets, would normally take up to a minute to negotiate from one end to the other as rows upon rows of people line up for their daily snack, lunch and in-betweens. Now, on most days, there is ample room to walk—even during peak hours.

“It’s not that people have stopped eating,” says Ganesh Shetty, proprietor of Sai Shabri sandwich stall, “More people are sending for parcels these days. I guess it’s a safer way to eat.” Changes like these, though marginal, are perceptible—as much in the hawa-pani of the place as in the decreasing number of ‘dine-in’ customers. The bonhomie is strained, humour is dark, casual conversations invariably centre on explosions and attacks. And there are other changes: large garbage containers have been done away with, leftovers and garbage are collected by individual vendors in small see-through plastic bags, civic garbage vans come thrice a day, cooks and helpers at food stalls have been instructed to keep a close eye on customers, vendors are consciously looking out for suspicious bags and packages that have been left unattended, a couple of policemen in mufti drop by for their ‘rounds’ and police patrol vans are more visible.

Mumbai’s food lifelines, the khau galis, are now security nightmares as city police clamp down after the July 13 blasts.

Khau galis dot the city, from the commercial and business hubs in the south to residential localities in the suburbs. The municipal corporation estimates there may be 140 authorised and unauthorised khau galis in all. Some are famed for their fare, others frequented for their mix of convenience, dependability and affordability. They rival a restaurant for sheer variety though they take a beating on the hygiene aspect. Often, these galis are the first markers of changing tastes and mixing cuisines. Khau galis, like the suburban railway system, are the food lifelines of Mumbai, typifying the city’s attitude to food: stand, eat and scoot. At night, some khau gali vendors put out bright red or beige chairs and stools that give Mumbai aficionados nightmares. Take khau galis away from the city and Mumbai would be poorer by one defining factor. But their character is changing as the city learns and re-learns to live with blasts. Some galis simply shut down, others change their very nature—food stalls and vendors are still around but the comfort and camaraderie are now subdued. “Earlier, we had a group that used to meet every afternoon for a fruit-snack here. Now, we do it about once a week and that too after much deliberation,” says Abhay Kapoor, an executive at Lenin pav bhaji stall, Cross Maidan.

Khau galis, unfortunately, have become a security nightmare after the Zaveri Bazaar gali took its third hit in 18 years and security at the Opera House one was breached on July 13. Each time in the past, food and business returned to Zaveri Bazaar. This time around, the gali is devoid of food vendors and customers. Also missing from the frame are the rows of two-wheelers parked at the edges of pavements and used as make-shift tables by vendors and customers. Local traders say the business in Zaveri Bazaar has declined by about 50 to 60 per cent. This coupled with police crackdowns on food vendors has called curtains on the bazaar’s famous khau gali.

“People don’t come for business, deals are not struck on pavements anymore, food vendors are not allowed, this place isn’t the same anymore,” says Mohanbhai Pudlawala, whose pudla (a Gujarati snack) shop is one of the few eateries left in the lane. Adds Hasmukhbhai, a Zaveri Bazaar regular: “Food vendors are not to blame. It’s the illegal parking that’s to blame, but the police have driven away everyone.” Adds A.M. Shetty, owner of Bengal Foods: “Food is an integral part of how we do business here”. Similarly, the Opera House khau gali exists only in memory of those who frequented it. “The place has been sanitised and cleaned up, no one is allowed any activity,” says Hardik Hundiya, a diamond trader and publisher of a trade magazine.

This is also the fate of Dalal Street and Nathalal Doshi Marg, two small lanes with old-world buildings that lead to the Bombay Stock Exchange, targeted in the 1993 blasts. “The lanes are barricaded out except for the pedestrians. We do some dhanda on the side streets but you can’t call it a khau gali now,” says Thankappan, a sandwich stall owner. “People come because they have to eat, but the fear is always there.” In the khau galis of south Mumbai, particularly those serving business and commercial hubs, the fear of imminent attack is palpable. For displaced vendors, like Ashok Paswan who used to make and sell samosas for 30 years in the Zaveri Bazaar khau gali, the anxiety is about feeding his family.

The mood is less sombre in khau galis across the suburbs. Here, the buzz and bustle has not taken the hit south Mumbai has. People drop by with the same ease and regularity. Cars still line up at the Shivaji Park khau gali late into the night, college students and executives still wait their turn at the Juhu gali, families still step out for an after-dinner snack or kulfi at Malad and Kandivli. And it is business as usual for the galis on Mohammed Ali Road.

With the peak festive season coming up, impromptu khau galis sprout up across the city—near Ganpati pandals, Navratri garba-dandiya venues, at masjids for Id and so on. The Mumbai Police’s request to festival organisers to “tone down celebrations” has been met with stubborn refusals. Then, they pressured civic authorities into carrying out a drive against illegal hawkers, especially street food vendors. “We had meetings with the police, their only point is to remove illegal vendors and opaque garbage cans, as if those are the only reasons for a blast,” laughs Ganesh Shetty. Already, khau galis—at least those in the south—are exhibiting an atypical nervousness. As Mumbai’s perennial foodie Kunal Vijayakar puts it: “Blasts happen, but we cannot trade the charm of khau galis for anything”.

By Smruti Koppikar with Snigdha Hasan

‘Do Our Youth Want To See India Go The Pakistan Way?’