But Where Is The Book?

Declassified CIA papers are a better read than MoD narratives, but a structure would have been welcome 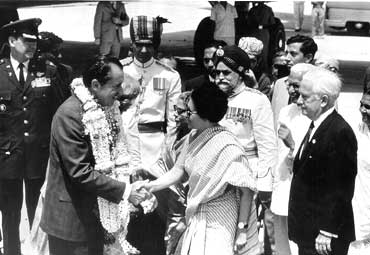 Conflict & Diplomacy: US and the Birth of Bangladesh, Pakistan Divides
By Jaswant Singh By S.P. Bhatia
Rupa Pages: 278; Rs 395
Thirty-seven years after the last full-fledged war India fought comes a book that goes into the primary sources of the events as they were seen in Islamabad, Washington and New Delhi. Readers have to be grateful to the authors who sifted through 1,300 pages of recently declassified US government records to piece together a historical work that greatly improves upon either the ministry of defence’s low-grade narrative, or the vulgar, jingoistic Indian works on how we cut "Pakistan down to size". The central character is clearly Nixon for whom this war turned into tragedy, chiefly because he suffered Shakespeare’s definition of "the tragic fatal flaw"—an unremitting dislike bordering on hatred for India and its premier, Indira Gandhi. It would be a mistake to merely relate the narrative to events as they occurred. Far more interesting are the characters, revealed through dialogue, as in any good play. There is Nixon, with a brash exterior, crudely spoken but deeply insecure within, and in need of constant reassurance of his capabilities and his place in history. And there is Kautilya—Henry Kissinger—ever willing to provide that reassurance, when Nixon’s words often turn into beseeching incoherence, with an overlay of—drunkenness?

Much of the inputs into Washington come from their envoys in Dhaka, Islamabad and New Delhi. More dissimilar characters one cannot imagine. Kenneth Keating, 71 years old, a wise and respected figure in Delhi, accused of having fallen in love with India, as apparently all US envoys do. Archer Kent Blood, the consul-general in Dhaka, who took the extraordinary step of joining 17 of his colleagues in putting in writing his strong dissent towards the US policy of supporting Pakistan and predicting the formation of Bangladesh as early as April ’71. And lastly, Joseph Farland, probably in love with Pakistan, who in retrospect, misrepresented every event as it occurred. Farland’s access and closeness to Yahya Khan were a curse that blinded him into losing the perspective required of the envoy of a great power in a provisional capital. Kissinger, as stated earlier, dominates the scene. What strikes one in the entire narrative is the impotence of the US state department and the Indian mea in shaping events, despite their better analyses on the developing crisis. Of course, Kissinger gathered all executive power to himself under Nixon, and no nsa has since then been permitted the latitude he was given.

The CIA got all the low level stuff right, like military and aircraft dispositions; and the big stuff all wrong. They predicted in June 1971 that the Indians would never launch an all-out attack in the East, and later they insisted they had a coup when they deciphered the Indian strategic objectives as the liberation of ‘Bangladesh’, the incorporation of southern Azad Kashmir into J&K, and the destruction of the Pakistani army, converting Pakistan into a ‘vassal’ state. This spectacular error led the US into a tailspin with the Russians and the Chinese. When Nixon realised that East Pakistan was lost, he panics about the Indians conquering West Pakistan, facing down the Chinese with Russian help and ending up victorious in Southern Asia. The consequences for the US, Nixon apprehends, is a Russian-inspired Arab victory over Israel in West Asia and the immediate loss of Vietnam.

It is this descending domino spiral that led the Nixon-Kissinger duo to send the Enterprise and, as we now learn, plan the blockade of Haiphong, to ‘pick up’ Vietnam. So despite the incredibly soothing influence of Russian envoy Voronstov, who guarantees the integrity of West Pakistan, Nixon goes into incoherence at about the same time as Yahya—on December 13, 1971—constantly badgering Kissinger to ask if the Chinese have mobilised, to scare the Indians.

Despite the engrossing read this is, the question does arise: is this a book? One assumes that a book must be written by someone—normally the author. Stringing together a bunch of US government dispatches with an Introduction is not a book. If the authors didn’t realise this, Rupa should have, apart from providing five staffers to arrange the manuscript. Reading this work and looking at the scene in Pakistan, one can’t help wondering whether history can ever be prevented from repeating itself.