But The Sari Goes On For Ever... 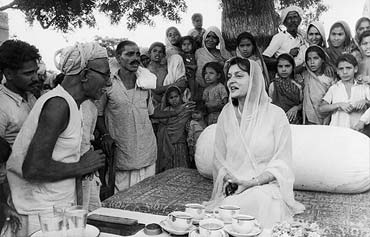 outlookindia.com
-0001-11-30T00:00:00+0553
In 1947, Jawaharlal Nehru, in his immaculate achkan, churidars, topi and red rose, represented one end of the Indian fashion spectrum, while Jinnah, in double-breasted Savile Row suit, spats, cane and hat, typified the other. Gandhi and Vallabhbhai Patel, dhoti-clad, stoutly straddled the middle ground—supremely indifferent to what was considered "trendy". Women too, were divided into traditional and westernised. The latter were thought smarter (our brain-washed colonial minds!), but it did not mean western attire—simply, flowered French chiffons rather than Kanjeevarams, pearls and not a mangalsutra, short marcel-waves instead of a joora, accompanied by bright red lipstick and nail polish. Maharani Gayatri Devi of Jaipur and Rani Sita Devi of Kapurthala, both featured among Vogue's most beautiful women, epitomised this Look. Indian royals perpetuate that look till today—stylish then, now an anachronism.

Amrita Sher-Gil died in 1941; always ahead of her times, she typified the fashionable post-Independence Indian woman—neither imitative nor traditional, but a bold individual blend of the Indian aesthetic—influenced by Ajanta, Ellora and Bundi miniatures rather than Hollywood stereotypes. She wore tightly draped georgette saris with wide gold Kanjeevaram or Benarasi borders, her brocaded blouses sleeveless and decollete, hair middle-parted and sleekly curving over her ears into a bun—heavily powdered, dark lipstick, eyes enhanced with kajal, and a big bindi, flowers worn in the evening. This sultry siren look was swiftly adopted by Indian filmmakers, and exaggerated into a distinctive Bollywood style—the hallmark of Vyjanthimala, Meena Kumari, Madhubala, Saira Bano et al, even when they were dancing in corn fields pretending to be peasant girls! 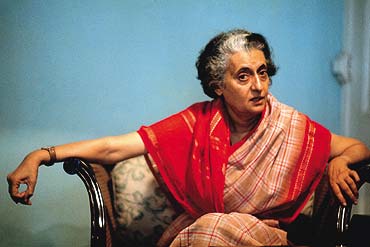 Indira Gandhi’s saris did much to promote our textiles

Saris were the fashionable dress. Only Christians and Parsis wore frocks, and they were considered distinctly un-chic. Ironic, given that discos and nightclubs today bar admittance to women in saris! Daily sightings of Indira Gandhi on the front pages for over 35 years, first as the prime minister's daughter, then as prime minister herself, wearing exquisite handloom saris, did much to promote indigenous textiles. One has only to look at other women leaders in neighbouring Nepal, Sri Lanka and Bangladesh to see the narrow escape we had from cheap gaudy nylons! 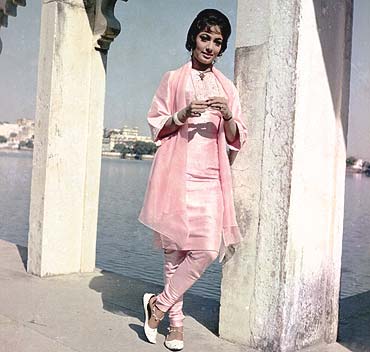 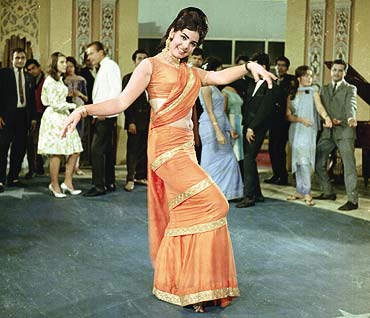 Worn below the belly button, and wrapped twice over. Mumtaz and the ’70s.

The '70s were psychedelia: Woodstock, flower power, the Beatles in chikan kurtas with sitars and the Maharishi, LSD.... Everyone was in tie-n-dye, cheesecloth and bleeding madras. Che Guevara moustaches. Pale, pale lipstick. Westernwear made a comeback, but in a fun punk way, blue jeans became cult clothing. People begged them off foreign-returned friends; even buying them off hippies wandering on Janpath looking for a drag. Tapered trousers gave way to 30-inch-wide flares, worn with skin-fitting see-through shirts, knotted at the waist. Career women, driving scooters and cars, were seen in shoulder-padded pant suits. Bollywood heroes were no longer rajahs and nawabs, but Angry Young Men: long sideburns, hipster pants, shirt open to the waist, colourful scarf knotted around the neck. Dark glasses, the bigger the better, were suddenly a must. 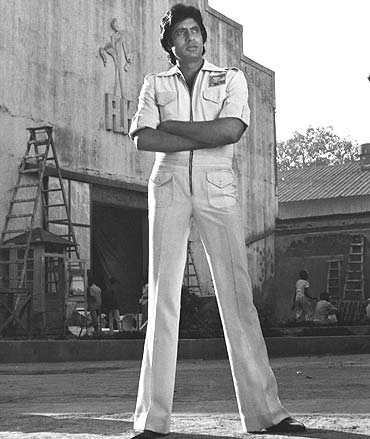 The '80s brought in a curiously retro "ethnic" boom. The divisive politics of the day accompanied a parallel nostalgia for tradition and ritual. In a strange way, the Golden Temple assault, the Mandal agitation, the Ayodhya-Babri Masjid dispute made people flaunt their cultural identity. Whether it was Amjad Ali Khan or Amitabh Bachchan, Rajiv Gandhi or Romi Chopra, young politicians, actors, socialites and movers and shakers were seen wearing champakali kurtas with an angavastra or shahtoosh flung over their shoulders. Mirrorwork and zardozi, embroidered jootis, dhoti salwars, chunky silver and kundan jewellery, tassled patchwork jhola bags were everywhere. An occasional Parsi lady still wore her fur coat and diamond tops to the Bombay races, but otherwise the look was Mughal-e-Azam out of Rajasthani Village Belle. Livleen Sharma remains a classic example of that urban gypsy look. We saw wonderful revivals of dying textile traditions—chikan, Kalamkari, Kutchi applique, Maheshwari.... Stars like Smita Patil and Shabana Azmi embodied the handloom look, and government emporia like Cottage Industries and Gurjari, and private boutiques like Anokhi and Ritu's Boutique, introduced bandhinis, kota-doria, ikat and resist-dye prints into a pan-Indian consciousness. The Khadi Bhandars dusted off their khadi thaans, and Fabindia made a killing in block-printed kurtas. 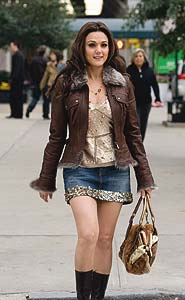 Then suddenly, in the mid-'90s, India was "liberalised"! Foreign brands flooded the market, and satellite TV brought in MTV, Bold & Beautiful, Baywatch, and the ads and icons that went with them. Being desi or even ethnic was certainly not "in". Overnight, it was minis, not mirrorwork, that young misses were wearing to parties and discos. Streaked blonde and auburn hair. Benetton T-shirts, Levi's jeans, Nikes and Lacoste. Little black dresses and fishnet stockings—all in the blazing Indian summer! It was the age of the Fashion Show. Every evening had newly hatched nift graduates sending out anorexic models in Fashion TV and Elle-inspired over-the-top cuts. Parmeshwar Godrej sported berets, Preity Zinta wore Prada and boots. 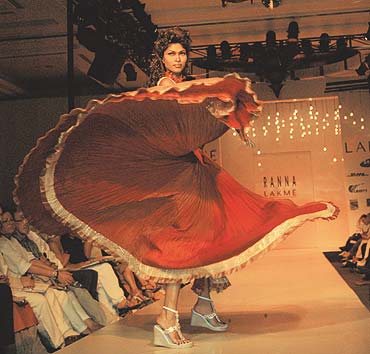 If the '90s were all about fashion shows, ours is the decade of workouts! Weight loss, never previously an Indian concern (our ancient texts famously celebrated elephantine hips and melon-like breasts), has become kitty-party talk. Middle-aged matajis squeeze themselves into tracksuits and trainers, and climb on to treadmills. Meanwhile, Indian fashion, in our typical jugaru way, is finding its feet in the best of both worlds—east and west; tradition and modernity; street-savvy grunge and more than a bit of sparkle. 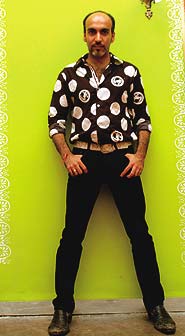 What has changed? First, the sheer range, diversity and eclecticism of the clothes we're all wearing. Second, the invention of the "generation gap" and the corresponding emergence of teen fashion. Children now dress quite differently from their parents. Third, Indian men have forsaken the monotone blacks, greys and whites of the '50s, and gone back to being peacocks again. And fourth, our style icons. Royalty are no longer in fashion. And hard to see Mayawati, Jayalalitha or Mamata Banerjee as trendsetters. Even Sonia Gandhi is admired rather than imitated. It's all showbiz on Page 3 and the Rag Mags—starlets, models, pop and sports stars, an occasional tycoon's offspring, all getting younger, thinner and jetset international each year. The beauty industry is booming, so are bleaching creams. But, good news: bosoms are back, and the sari goes on forever...

(Laila Tyabji is the chairperson of the Dastkar Society for Crafts and Craftspeople.)

Fly On The Chandelier