Home  »  Magazine  »  Business  » Con Air »  Why Jet Airways Nosedived And What's Next In The Turbulent Sky: A Dozen Issues

Jet Airways crash-landed after ruling the skies for 26 years. With massive debts and with no investors keen to rescue the beleaguered airline, the life jackets are out 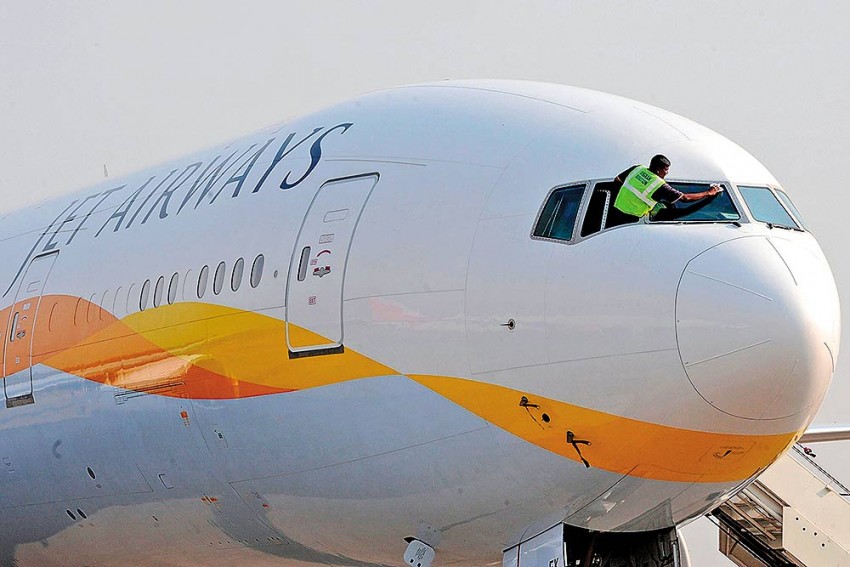 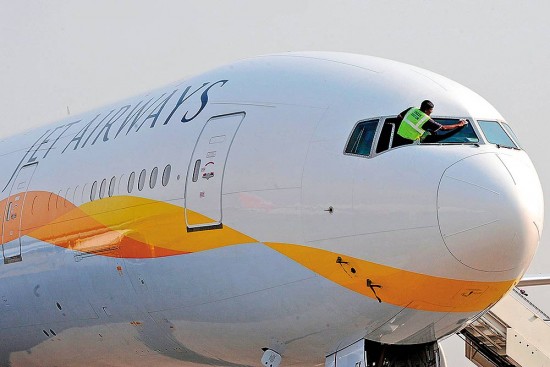 Jet Airways, the premium aviation company founded 26 years ago by Naresh Goyal, is today on the verge of bankruptcy. The company has grounded all its 119 aircraft and suspended all domestic and international operations. Its 14,500 employees, unpaid for the past three months, are staring at an uncertain future and the lenders are clueless about recovering over Rs. 8,000 crore given in separate installments to meet the airline’s operational costs. The State Bank of India-led consortium of banks, which took control of the carrier, couldn’t get a potential investor to pump in fresh money to start operations. We piece together the complex Jet story, with its many twists and turns.

Why did it go bust

There are many reasons. Some experts believe that Jet’s acq­uisition of Air Sahara in April 2007 for Rs 1,450 crore was the beginning of its downfall. Not only was the acquisition expensive, Jet Lite, the rebranded Air Sahara, suffered losses in the first year of its operations. In the financial year 2007-08, the company showed a loss of over Rs. 600 crore for the first time in the company’s history.

Rising fuel costs and ruthless competition, mainly from low-cost carriers, continued to deteriorate Jet’s financial health as it had no option but to offer seats below operational costs. Reports also suggest that Naresh Goyal’s autocratic functioning resulted in some unrealistic business decisions. For instance, Jet paid 12 per cent commission to its agents against the sale of tickets while the global practice was of less than 2 per cent.

Who can come to rescue

After it was put up for sale by lenders, Jet Airways has rec­eived expression of interest from seven parties which ­includes its main investor Etihad Airways. How many of these actually convert into serious bids has to be seen. Reports say the Tata group, which had shown interest in acq­uiring the airline last year but backed out, is also interested but with its own conditions.

Any company that acquires Jet Airways will have to take care of its debt and pump in more money to revive the airline. When it closed down last week, Jet had just five aircraft as the others were reacquired by lessors. This means the new company, if it wants to resume international operations, will have to acquire at least 20 aircraft to start with. Apart from this, the airline will have to rebuild pilot and eng­ineer strength which it has lost now to competing carriers. Selling Jet piecemeal will not make sense as Air India got no bid despite having better credentials and better ­bilateral and parking rights in some of the world’s largest and busiest airports.

Why banks continued to fund Jet

After listing in 2005, Jet Airways registered profit until the FY 2007. From FY2008 till FY2015, it reported massive losses in eight consecutive financial years. It, however, kept getting financial support from banks whenever needed. In 2017, the company showed some profit but slipped back into losses next year. Experts say that banks should have been prudent enough to analyse the company’s financial health much earlier. “Rs 8,000 crore was not lent in a year or so.

It was given in chunks. Lenders should have asked the company to reduce the cost of operations,” says a financial exp­ert associated with the ministry of civil aviation. “Lenders might have thought that by infusing Rs 500 or 1,000 crore, the company would come out of the problem but it went downhill,” he adds.

Though the reasons for both airlines going belly up are similar, lenders have acted differently in the case of Jet Airways. In case of the now-defunct Kingfisher, lenders filed complaints to various law-enforcing agencies and took the company to the National Company Law Tribunal for initiation of bankruptcy proceedings.

In Jet’s case, the bankers led by SBI took management’s control and decided to run till the time they get a suitable investor. However, it has failed to get any buyer till now and non-infusion of funds led to grounding of Jet. Hence, the experiment to run the company rather than take it to the insolvency proceedings has failed.

Some experts say that banks have changed the resolution plan several times. First, SBI said it would invest Rs 1,500 crore, then it came down to a Rs 400-crore interim funding, but finally there was no infusion of funds. The company needed money till the time the bidding process starts. As that did not come through, the airline had to stop operations completely.

Jet Airways’ total financial liability is over Rs 10,000 crore which includes bank loans, employee’s unpaid salary and dues of aircraft leasing firms. When compared with Kingfisher Airlines, Jet’s debt is bigger. When Kingfisher stopped flying in October 2012, its outstanding debt was over Rs 7,000 crore which included bank loans, salary of 7,000 employees and dues of other companies that provided its service.

In November, last year, SBI asked EY to audit Jet Airways’ accounts for debt restructuring and identify the areas that caused loss to the company, However, there is no update available on that till now. Jitender Bhargava, a former executive director of Air India says, “SBI must make the forensic audit report public. As of now, it seems that the lenders are soft with the Jet Airways.” 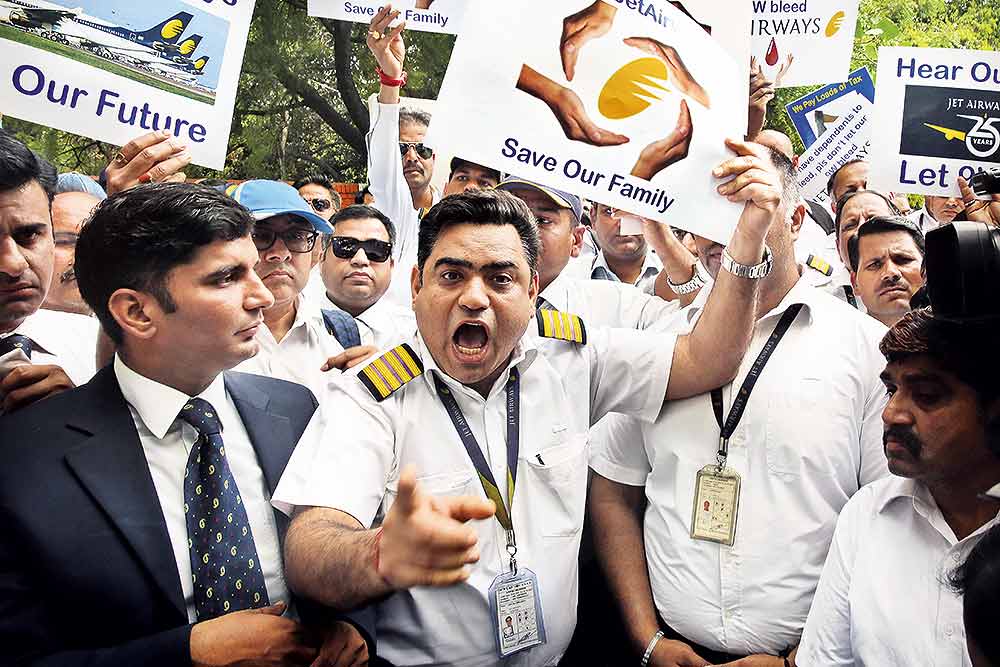 Anger On The Streets

Jet Airlines pilots during a demonstration against the suspension of operations.

Why no probe against Naresh Goyal

If a company fails due to siphoning of money, falsification of records, and fraudulent transactions, its lenders can approach law-enforcing agencies and ask for action under the provisions of Indian Penal Code 1980 and Companies Act of 2013.

In case of Kingfisher, banks alleged misuse of its money and lodged complaint with the Central Bureau of Investigation (CBI), and the Enforcement Directorate. However, this hasn’t happened yet in the case of Jet Airways. There have been allegations of misappropriation of funds by Jet but till now lenders have not taken the criminal prosecution route. Goyal still owns 24 per cent share in the company.

Arvind Gupta, a whistle-blower in the ICICI Bank-Videocon case, says that he has been raising Jet issue for more than three and a half years. “I have written to the RBI and the PMO that money has been siphoned off and the company has been made to bleed. However, SBI continued to invest in it. Besides a forensic audit given to EY by the SBI, the Ministry of Corporate Affairs has also been investigating its financial bungling but no one knows the status of these investigations,” Gupta says.

“Full-service carriers are in no position to compete with the low-cost airlines in a sensitive market.”

The basic problem with full-service airlines like Jet Airways and Kingfisher was that their cost of operation was much higher than that of low-cost carriers while fares largely remained the same for all. According to experts, the operational cost of Indian carriers against that of international players is around 30-40 per cent higher. For instance, the cost of aviation turbine fuel (ATF) in India is 40 per cent higher than in South Asia and ASEAN nations. ATF, which is not covered under GST, att­racts an excise duty of 11 per cent. Plus value-added tax (VAT) levied by states goes up to 30 per cent. Other steep cost inputs like user development fee, navigational, landing and parking charges, passenger service fee (security and fac­ilitation) rub salt into bleeding wounds of airlines.

Airport costs too increase the financial burden as between 2007 to 2019 parking charges have increased by 100 per cent from Rs 3.70 to Rs. 7.40 per hour per tonne. Aviation experts say that India is the only country where passengers pay a fee for getting security at airports. The manpower dep­loyment in airports like Delhi and Mumbai by CISF have increased manifold followed with a steep rise in security and facilitation charges, which is approximately Rs 200 per departing passenger.

How do other airlines make profits

All airlines operate on a similar cost platform. Cost shouldn’t, therefore, be a factor if fares are on cost plus basis. Airport charges, ATF, staff costs—particularly pilots and engineers— are similar for both full-service and low-cost airlines. The latter, however, save on food served, and therefore smaller crew requirement, a higher density of seats, faster turnaround of aircraft resulting in higher utilisation of aircraft. Full-service carriers are in no position to compete with low-cost airlines in a price-sensitive market.

How will banks recover loans

It is very difficult for SBI and other lenders to rec­over the loans as Jet does not have any tangible assets except 16 aircraft that it owned. They are valued between Rs 2,500 to 3,000 crore. The rest 103 are owned by other companies which had lent them to Jet. Besides, Jet owns air routes and some offices which don’t fetch a high value. At the time of shutting down operations, Jet’s aircraft strength was just five.

Should the government interfere

Interestingly, in 2014, when SpiceJet was on the verge of a collapse, the government offered an array of benefits and relaxation such as extension of credit period to repay bank loans and dues to oil companies. However, when Jet asked for the similar benefits last November, it was turned down. “I think the government should not pick and choose companies to benefit them. Rather this should have been done under some short-term or long-term policy which would apply to all. The government should make a level-playing field,” says a former bureaucrat from the civil aviation ministry.

What happens to advance tickets

The official spokesperson of the Jet says that lots of tickets have already been refunded and the process is on. However, fliers have complained of delay in getting their money back. “DGCA should ask other airlines to honour Jet tickets and when the new investor takes over the company, it should be asked to repay the cost to other airlines. That’s the only immediate solution we can have in the interest of flyers,” Subhash Goyal, Chairman, Assocham Tourism & Hospitality Council, says.

Will this lead to fare hike

Over 100 aircraft of Jets used to make 650 flights every day. Suspension of so many flights is bound to have an adverse impact on ticket prices; fares in some routes have already increased by about 400 per cent. Unfortunately, sector regulator, the Directorate General of Civil Aviation (DGCA) or the civil aviation ministry, have not exercised any measures to cap the fair of badly-affected routes.