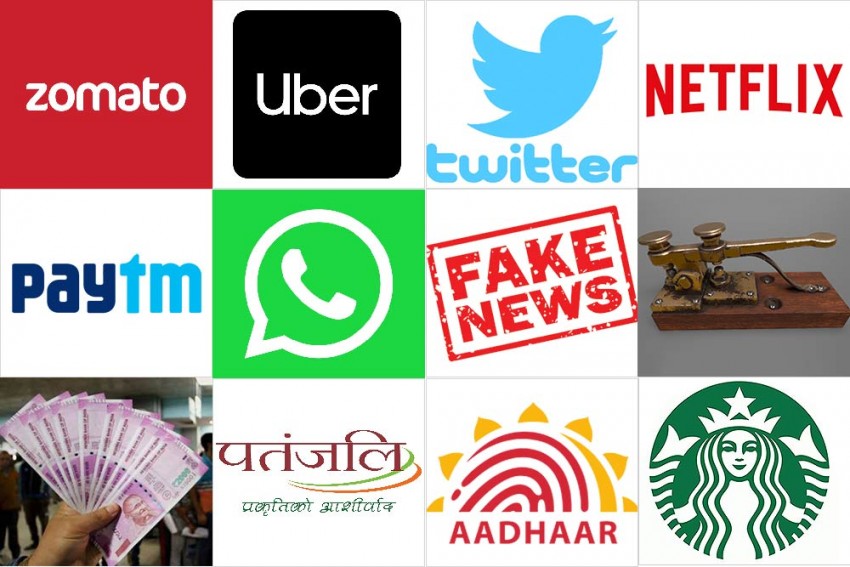 Launched in 2008 as Foodiebay, to know which restaurant was serving what in Delhi-NCR, Zomato got its name in 2010. By 2015, it created the biggest restaurant menu library and got into home delivery, bridging eatery and customer.

It was just another messaging app in 2009-10. But it was to bec­ome an unstoppable social phenomenon. All of 200 millions Indians now—big family groups, old school networks, virtual chaupals—sharing jokes, pics, videos, docs...and fake news.

No other 12-digit number has ever grabbed so much headline space than India’s Aadhaar identification. But wherever you stand vis-a-vis privacy and other controversial aspects, you now stand under the shadow of this giant biometric banyan tree.

In 2007, Indians heard that books could be door-delivered by a new internet service, Flipkart. Soon, parcels were being delivered to city homes by men in two-wheelers. In 2013, the big jungle itself came to town...the online giant market Amazon. Shopping has never been the same since.

There was a time when the camera would grace occasions. The advent of the smartphone camera now enshrines the prosiness of life through compulsive self-portraiture. A veritable camera lucida for us to preen, disregarding danger. It’s young Indians’ self-reflexive inamorata.

If your coffee is ‘Starbucks or nothing’, you were smelling the wrong Robusta till 2012. Said a guy selling ‘crappuccino’ at India Gate, a milk-sugar-mix with a sprinkle of Nescafe: “My coffee’s bad? Go get a latte for Rs 10 in Starbucks.”

When India was still getting a grip on ATM, along came PayTm—the digital wallet firm, founded in 2010. Then came demonetisation and PayTM became part of daily life: from buying paan to paying the auto-wallah and Ola. It also taught Indians what a QR code is.

Uglier, punier, with a penchant for hiding itself behind a stack of Rs 20 notes in a wallet, the Rs 2,000 note—born out of the need to remonetise the economy after November 2016—is a liability to all. Try changing one into notes of smaller denominations.

The formula is straightforward: mix global capitalism and cottage industry and market it using brand swadeshi. Patanjali is now a $2.5 billion FMCG enterprise. By the time you finish watching Baba Ramdev stretching on TV, a Patanjali store cloning MNC products has cropped up in a mohalla.

Some starting trouble...like when folks thought the name rhymed with ‘Kuber’. (Yes, there was money to be made for the drivers, and to be saved for the driven.) Now we’re all Uber­menschen...or little moving dots.

Bitcoin emerged as a radical form of electronic cash that took the world by storm and was valued at more than Rs 14 lakh per unit in 2017. In a world increasingly living a ‘virtual life’, the Bitcoin concept is here to stay.

How did people keep fit without activity trackers? They just ran, until San Francisco’s Fitbit Inc told them how to self-stalk their walks with preset goals that earn points.

Though the term was popularised by Donald Trump and reeks of his obtuseness, false news is a blight keeping pace with the digital spread. Freed from editorial control and newsroom rigour, news pandering to volatile sentiment, often accompanied by virulent videos and spread by social media, have claimed lives.

When the e-book arrived, readers seized by tech-lust bought kindles, to loud sighs. Sale of e-books overtook that of the old article in the US, but not for long. They’re an adjunct to the real thing. As Umberto Eco said, “The book is like the spoon; once invented, it can’t be bettered”.

Have you been waiting for the day when your clothes, shoes, meals, dentures will come out of a printer? (Er...maybe even that 3BHK apartment?) So have we. Well, 3D printing has been around since the 1980s and the prophesied day is not far when the Reality Maker turns up on your mantelpiece.

If brevity is the soul of wit, Twitter showed us how to do it in 140 letters. Well, okay, 280 now. Along with FB, it became a byword for social media, and it’s only now that ‘tweeple’ have paled in front of denizens of younger, snazzier e-spaces. But the chattering carries on, breathless as ever...occasionally marked kosher with a blue tick.

The hold of greeting cards on Indians was tenuous till the ’90s—confined to urban pockets deep enough for such trifles. Then, a marketing miracle: firms created out of thin air an Indian clientele for occasions like Valentine’s/Father’s/Mother’s Days. A frenzy of card-buying took hold of young Indians…till the advent of costless, instant e-cards.

Ever since 1850, telegram was a mainstay of dispatching news. ‘Wire services’ brought news for media, while ‘wires’ (‘tar’) conveyed news good and bad to millions. The instrument of well-chosen deux ex-machina in films and literature survived the telephone’s advent, but was made irrelevant by cheap telecom and the e-mail. It breathed its last with a final spasm on June 14, 2013.

Like Darth Vader almost, before Netflix launched in India, free online platforms started faltering in their upload. But who’d pay Rs 500 a month? That attitude changed with the OTT giant garnering record subscribers of quality content. Now, Netflix is giving big-screen theatres a run for their money.