Bengal’s boat-making hub waits for the tide to change, a tailwind to sail through tro ubled waters 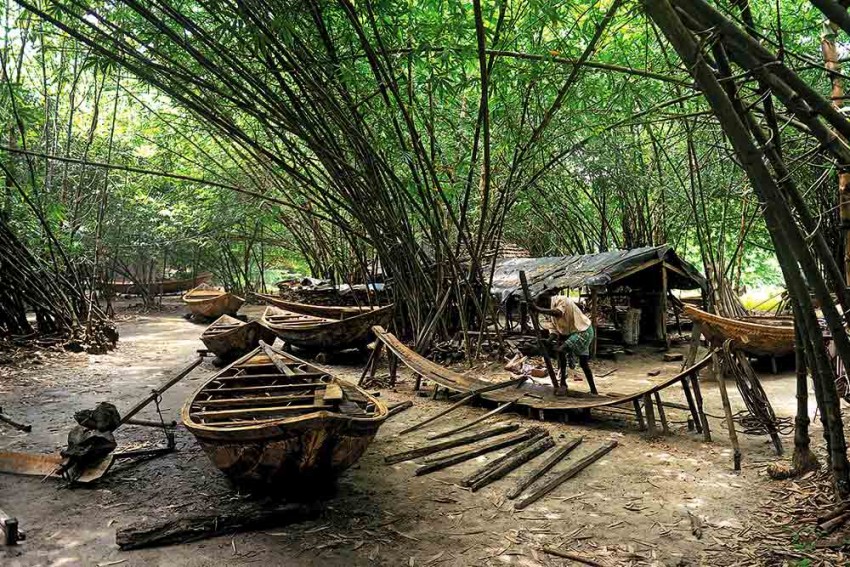 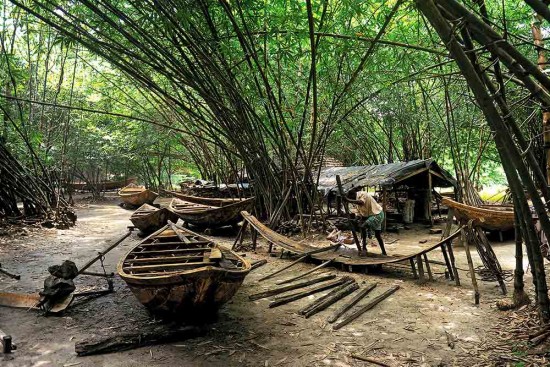 The staccato thump of the hammer breaks the springtime silence of a bamboo grove by a languid, humid Hooghly—in Balagarh, about 75 klicks from Calcutta. Streaks of sun pierce through the foliage and light up a row of boats. Some on stilts await the varnish; some are just wooden ribcages like the one 65-year-old craftsman Sheikh Ashraf Ali is hunched over. Ali’s craft is afloat and awash with history, but the centuries-old tradition of making wooden boats could soon die out as the demand for such vessels is disappearing rapidly. Balagarh’s Shreepur Bazaar, the boat-making hub of Bengal, is a timeless ­island amidst strong currents of change. “We are struck in a trade possibly at its last leg,” laments Ali, the mistry or the master boatwright.

Ali and his crew are making a ‘dingi nouko’, a fishing dinghy, the likes of which founded the trade in Balagarh in the early 16th century. “Adi Saptagram, a few km downstream, used to be busy river port in medieval times,” says Supriyo Barik, co-owner of NBC Boat Manufacturing Company, the area’s oldest boat-makers. “Family lore has it that whenever vessels moored at Saptagram needed repairs, Rajbongshi wood craftsmen from Balagarh att­ended to them. Over the years, these craftsmen learnt boat-making and built boats for rivers as well as for seafarers. Our forefathers found the trade lucrative,” Barik says. 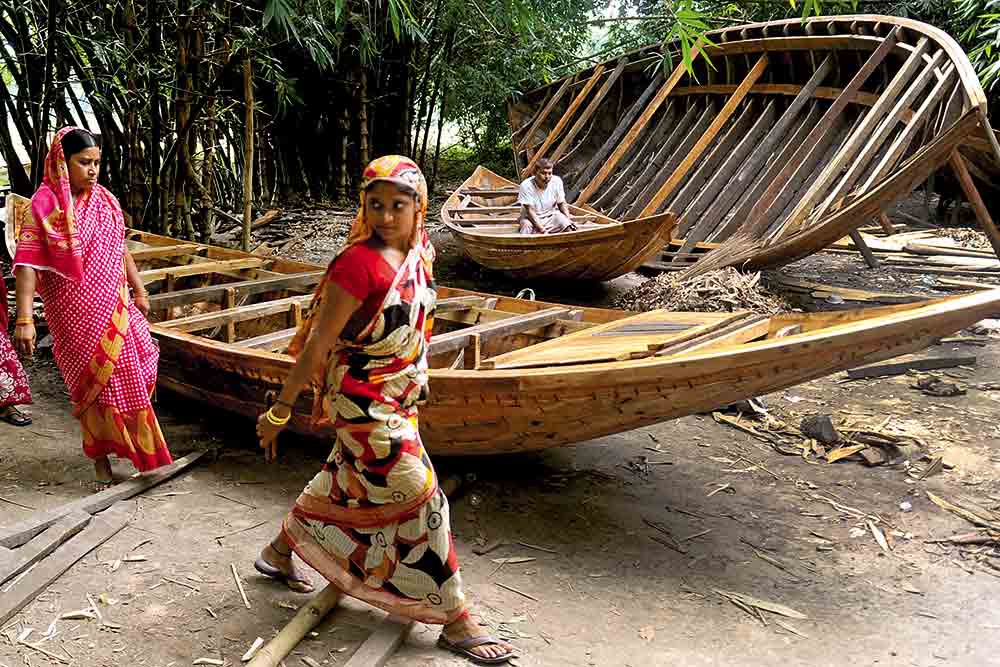 The Balagarh boat-making industry fed generations of skilled craftsmen and their families, but waning demand for such boats is slowly killing the trade.

Bengal is river country and boats were major movers of people and produce until a century ago. But those laidback river journeys steeped in poetry, prose and songs (Bhatiali) are lost in the modern latticework of roads and rail. “I used to sell four or five boats a month. Now it is difficult to sell even a single dingi nouko. There has been a steady decline in demand from Jharkhand, Bihar and Odisha. Bulk of our orders comes from these states,” says Ali, who has sold a single fishing boat at a cut-price of Rs 20,000 in three months. 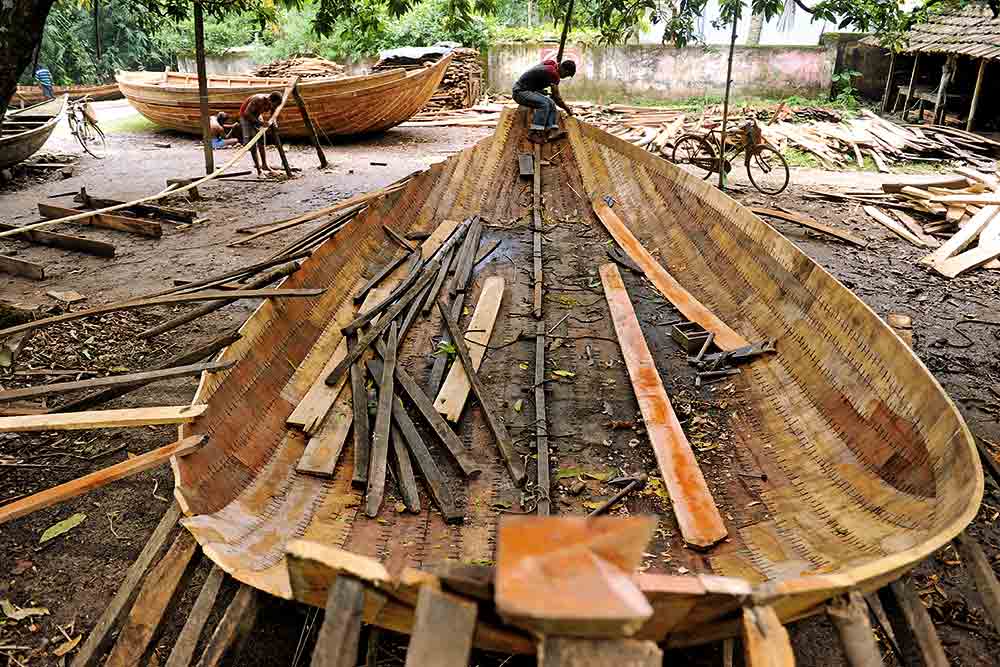 Monsoon brings business, but also sprouts fly-by-night operators who hammer out a dingi nouko in less than 10 days with inferior wood. Balagarh’s boat-makers find it hard to compete with these cons as they traditionally use only hardwood like sal or teak, but are now forced to accept cheaper varieties such as babla and kapur. Waning profits and disinterest among the younger generation in this specialised craft is bleeding the industry further, says Nepal Pramanik, 36, a mistry-turned-smalltime entrepreneur, who began as an apprentice to his father at the NBC. 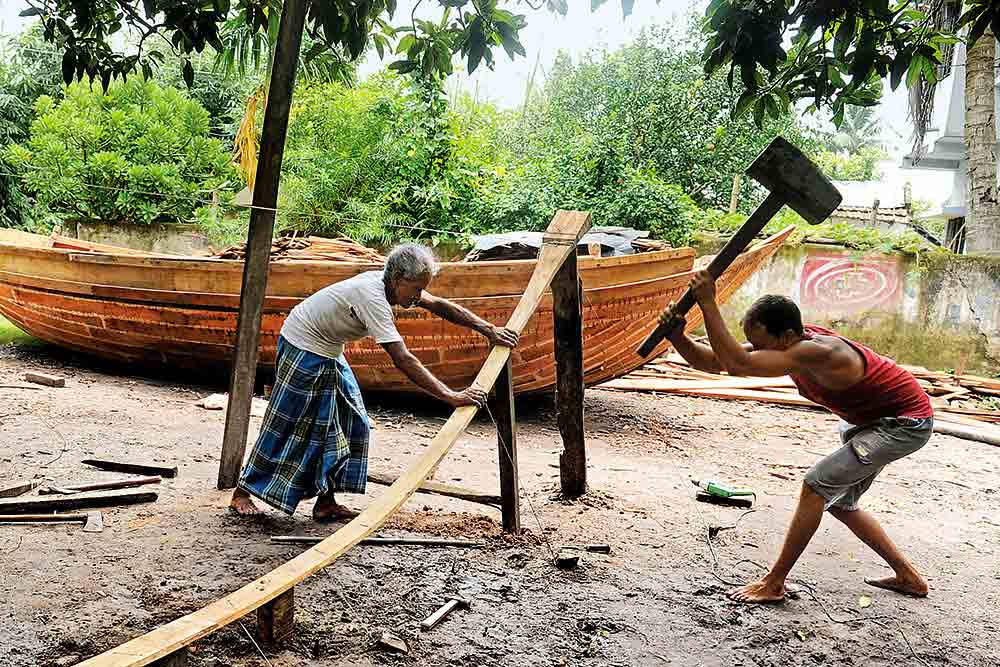 A mistry and his apprentice bend a wood piece for the hull.

Shankar Barik, a fifth-generation boat-maker, tells with a heavy heart that he has seen a slice of history disappear before his eyes. “The village had more than 3,000 boat-makers a couple of decades ago. Now there’re hardly 800.” These vessels are of unique value: an ­archive for the art of woodworking, a living repository of legends, histories of migration and seafaring, coll­ective memory, and stories of knowledge and cultural exchange. Will anyone take action to save the boatwrights, their boats and the age-old industry—not simply in museums or on sepia-toned postcards? 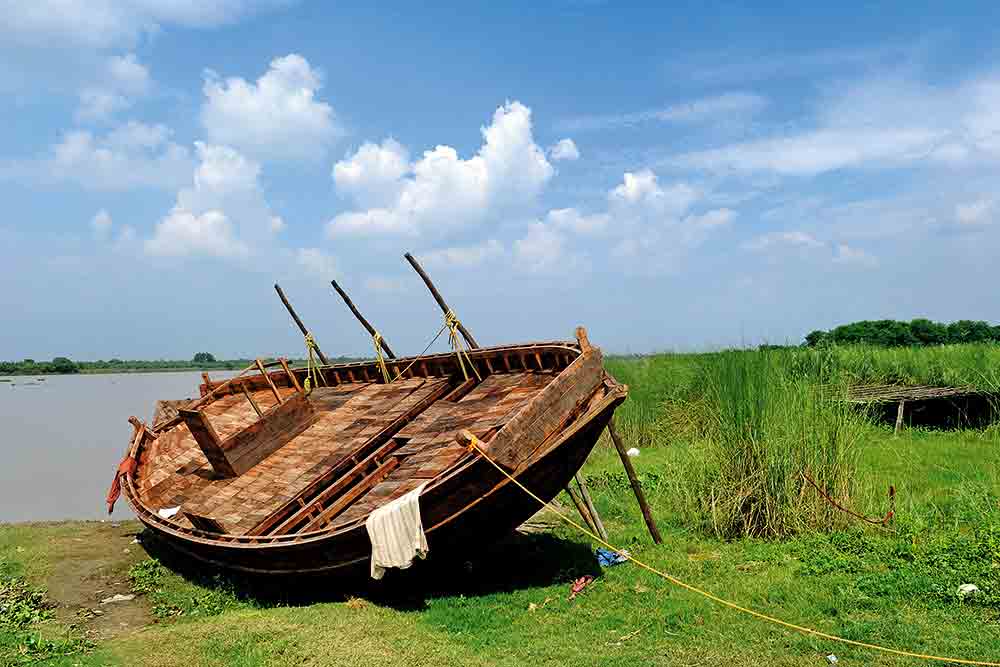 Moored on the Hooghly riverfront, a fishing dinghy cuts a sorry figure.

Balagarh’s boat-makers hope the state government’s decision to order wooden boats for a floating market in Calcutta might throw a lifeline to the dying industry. And the die-hards among them vow to turn timber into sturdy boats “as long as there is water in the rivers, lakes and the seas…” With their whole life invested in their craft, they say their faith will keep them afloat.

This Is An Anti-Farmer Government: Ashok Dhawle