Reelection of a stable government has had no impact on lifting the country's economy. Slowdown started with banking and more sectors are getting impacted. Is the government really bothered? 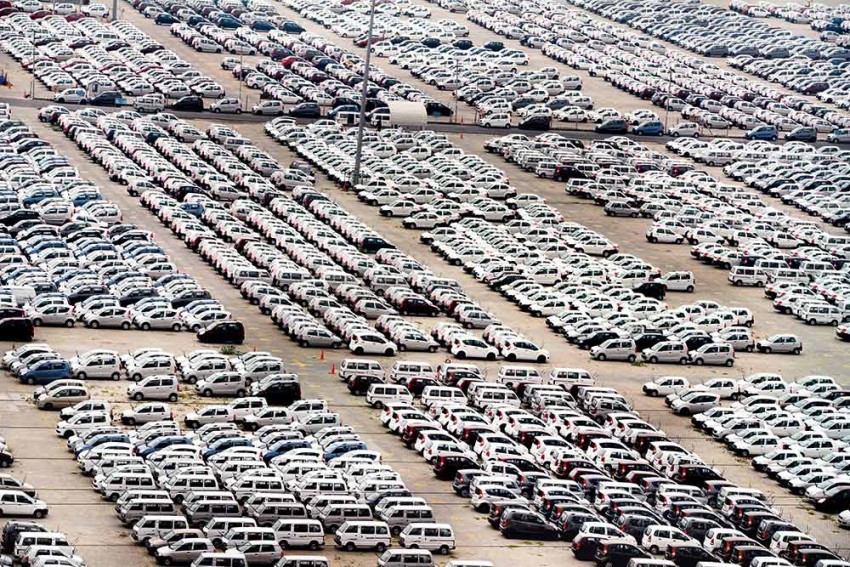 In Doldrums
The automobile industry is a casualty of the ­reluctance of banks to lend
Photograph by Tribhuvan Tiwari
Lola Nayar, Jyotika Sood August 07, 2019 00:00 IST Slow And Down! Low Growth, Less Jobs, Poor Income, No Spending -- Why India Is In Economic Despair 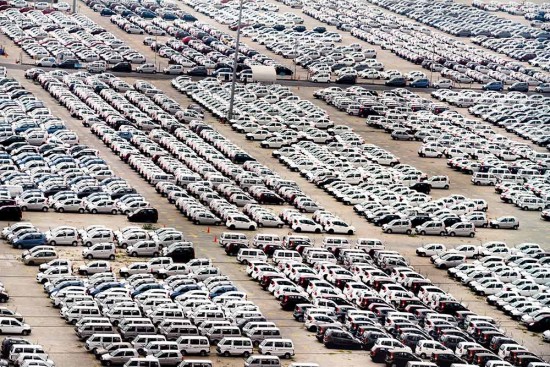 The government is depending on the private sector to boost the economy and create jobs in a scenario where the animal spirit seems to be dulled. The situation is unexpected ­considering the strong signal from the BJP’s reelection with a strong majority, promising a stable regime. The outlook is also good on the weather front—after a late start, ­deficiency in the crucial summer monsoon is down to 7 per cent as on August 5. Yet the latest Dun & ­Bradstreet report claims that ­business optimism for the July-­September quarter has decreased by 10.7 per cent amid continued slowdown in consumption and investment ­demand.

Senior economist Shashanka Bhide says India is looking at very modest rates of growth ahead as investments and consumer sentiments will take time to pick up. So far, public sector investment has been keeping the economy going, but even that is on the ­decline. “Return of a stable government does not seem to be enough. Policies to promote new areas of development have not happened and clear signals on reforms are still missing. One reason for this may be the global economic conditions,” says Bhide.

Attributing the dip in business optimism partly to lack of policy effectiveness, D.K. Srivastava, chief policy advisor of EY India, says the government has failed on two fronts. It has failed to improve demand, particularly consumer demand, through monetary policy stimulus by reducing policy ­interest rate by 25 basis points in three-time installments or 75 basis points in this calendar year. “But only 40 per cent of the rate reduction has been transmitted, so the effect has been partial and demand for consumer durables or investment goods has not picked up sufficiently. The message is clear—the monetary policy is not working,” says Srivastava.

“Investors have not reacted well to (­Nirmala Sitharaman’s) budget at a time of sluggish growth,” says Madan Sabnavis.

The government’s hope of private sector investment has not been realised so far. The outlook does not seem bright as there is nothing new in the budget to bring optimism that private-public partnership will take off. Jagannarayan Padmanabhan, director at rating agency CRISIL, stresses that infrastructure and private sector spends need to be boosted to revive India’s economy. The private sector needs to start participating in a more structured and collaborative manner, and investments, which had withered in the past five years, need to start trickling in. For this to happen, the government needs to make the policies conducive for investments, thereby assuring the private sector that it ­enjoys continued support.

“The government should step in and give direction,” says Padmanabhan. “The private sector wants a directional push and a commitment from the government. The sector is part of the overall growth story and needs facilitators to get the investments back.”

Experts point to the fact that for the last several quarters, GDP growth has been on a downward trajectory. That is now being reflected in all segments of the economy through the slowdown. This slowdown is not negative, though it is lower than expectations and, in some quarters, growth has come down to 5 per cent or so. This means the virtuous cycle of high growth, more jobs, more income and more spending is not happening. “Initially it started to ­impact high-value items, which were also impacted by various challenges in the financial and non-banking financial services sector, but now they are impacting even those things that would be the last to be impacted—items of daily consumption, including fast moving consumer goods (FMCG),” states Arvind Singhal, CMD of Tech­nopak Advisors.

Market research firm Nielsen India has lowered its growth target for the FMCG sector to 9-10 per cent for 2019 as against 11-12 per cent estimated earlier. Within this, the food categories are expected to grow at a higher rate (10-11 per cent), whereas personal care and home care products are expected to grow in the 7-8 per cent range.

While the buzz about slowdown is gathering ground, the government is not even acknowledging that there is a problem. Economists stress that sentiments seem to be going down for many reasons. It started with banking, then fell on projects, followed by a dip in government revenue, and now the government seems to be withdrawing from whole economic activities, particularly where the multipliers are higher. All this is impacting the overall business sentiment.

There are also issues with the ­external sector, and India is ­getting into a protectionist kind of situation along with many other countries. Whether this would benefit India’s economy remains to be seen. Many fear this protectionist tendency may prove to be a drag on the economy as it could adversely impact import-­led export growth.

N.R. Bhanumurthy, professor at the National Institute of Public Finance and Policy, traces the present slowdown to the crisis in the banking sector. “The way we have managed the public sector banks for the past four to five years has impacted the overall business of banks and non-banking ­financial companies. This, in turn, has impacted core sectors such as automobiles and, to some extent, real estate, which was in doldrums long before the automobile sector,” says Bhanumurthy, adding that credit supply and not credit demand seems to be the main reason for lower consumer sentiment. Even if banks are reducing the lending rates, they are not really showing ­willingness to provide loans to people. Automobiles and real estate may be casualties of this reluctance. Bhanu­murthy is among those who have scaled down the GDP growth exp­ectations for 2019-20 to 6.5 per cent. 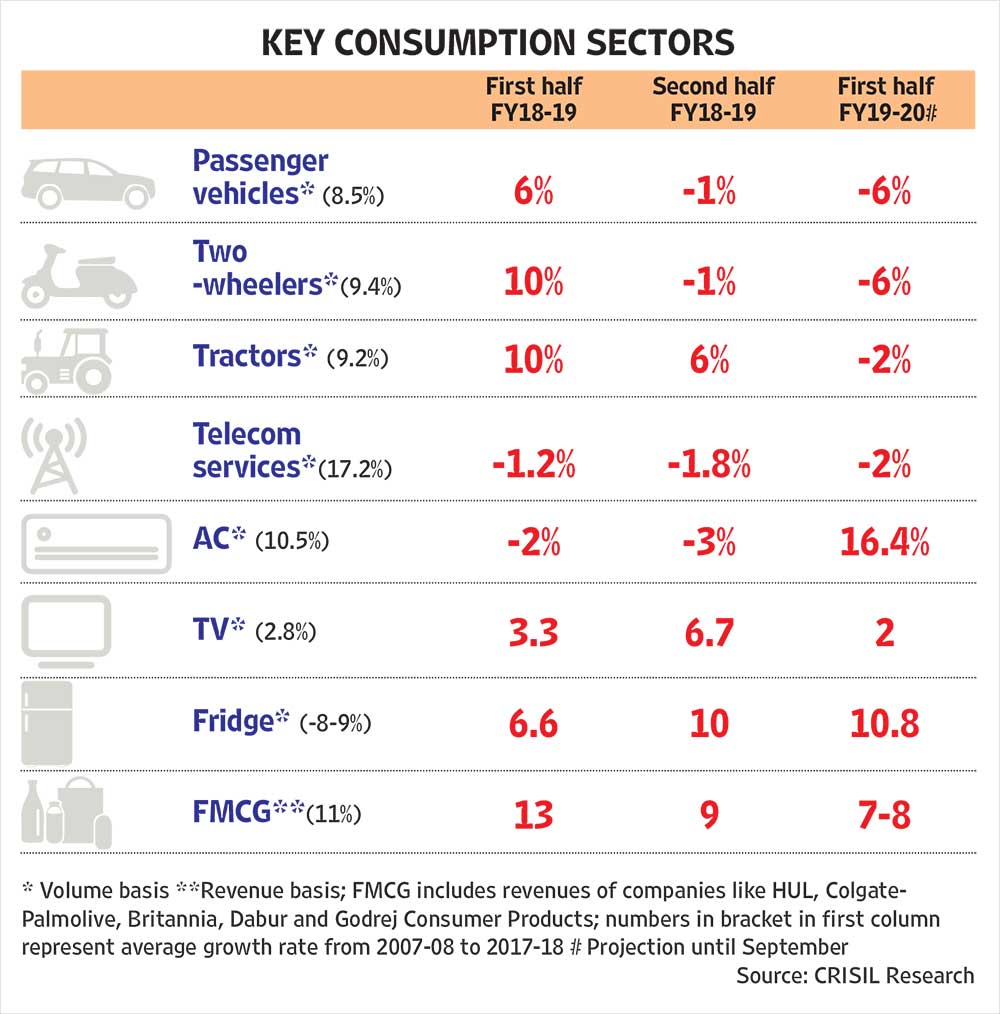 The slowdown has come amid widening debate on the GDP growth numbers. “The problem is from the demand side, so the slide could continue,” says R. Nagaraj, professor at the Indira Gandhi Institute of Development Research. “Incomes have not grown as fast as the official GDP numbers suggest. The economy is growing at a much slower rate than officially claimed, as former chief economic ­advisor Arvind Subramanian has ­recently suggested.”

Economists point out that private sector capital investment now hinges on consumer sentiment picking up and capacity utilisation scaling up to around 85 to 90 per cent as against the current levels of 75 per cent and below. Job losses are a corollary of the production slowdown. Informal reports from industrial centres such as Pune and Rajkot seem to suggest sizable job losses in the auto ancillary industry.

Madan Sabnavis, chief economist with CARE Ratings, points out that consumer sentiment is low mainly due to the non-commensurate pick-up in employment as well as incomes. “Spending power has come down and cumulative inflation over the years has impacted spending on discretionary goods. Also rural demand has not picked up and, as we have seen, food inflation has been very low, which also means farm incomes have stagnated and not grown. Investors have not rea­cted well to the budget as the clauses relating to mandatory 35 per cent free float of shares, tax on buyback and super-­rich tax have not been viewed favourably at a time when industrial growth is sluggish,” says Sabnavis.

Declining to get into the debate on GDP growth numbers, Sabnavis says that ultimately we need to see more jobs created and spending increase. This is vital in sectors that are just about staying afloat due to consumer-related demand issues. “It is evident that growth is not that buoyant as 6.8 per cent suggests. Also, with investment plans on hold, it is clear that companies are not going to invest unless they see improvement in the environment. The only spender is the government, but the amount is too low to make a big difference. Hence infra-related industries like cement and steel are following the path of the government spending on capex,” Sabnavis adds.

Experts claim bank lending to manufacturing is still low mainly due to the non-performing assets overhang and the rise in risk, especially when economic conditions are not congenial. Therefore, credit risk has come in the way of lending. Moreover, industry with excess capacity is not yet coming in for expansion in a big way. In case of real estate, retail demand has been more in the affordable segment; in the non-affordable segment, it has been concentrated in non-metro cities as the prices of property have not come down to attract households that are facing pressures due to limited increase in income, which is important for servicing debt. For commercial real estate, there has been sluggishness as business has been low key with little signs of a recovery that will prompt an uptick. Also, the shift from retail to e-commerce has lowered the demand for retail shops in malls, which has also led to excess inventory in the metro cities.

Alok Sheel, RBI chair professor at ICRIER, stresses that in the period prior to the global crisis, India’s ­economy was growing at a fast pace, possibly above potential, with every­thing on an upswing, including exports, consumption and investment. Once the economy started weakening, the exports and investment engines star­ted shutting down. Both are still dep­ressed. For long, consumption had been the single engine driving growth, but that has also stuttered in the past one or two years.

Sheel attributes the current economic slowdown to the long-term ­impact of demonetisation on the small-scale sector, as it is not very ­resilient. Even in the case of bigger companies, the animal spirit is missing. “For the animal spirit, you need a more predictable policy environment. Earlier, you knew the direction in which the policy would move, though not the pace of reforms. But now that too is not known, and many things like the trade policy come out of the blue. Ultimately, you cannot have an ­economy going too long on a single engine for it to be sustainable. Only a pick-up in investment can help revive consumer sentiment,” adds Sheel, who has earlier served as secretary to the Prime Minister’s Economic Advisory Council.

In effect, we have entered a vicious cycle where sentiment needs to be boosted with more investment, which can only happen if business sentiment picks up. Where consumers are concerned, if there is no growth, then there is no disposable income either.