Panic, Distress And Doom, That's The Story Of The Falling Stocks 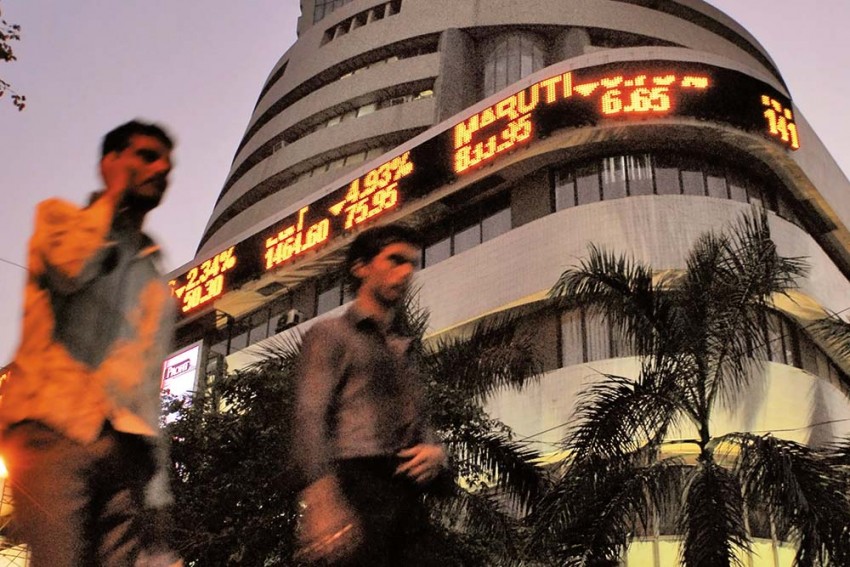 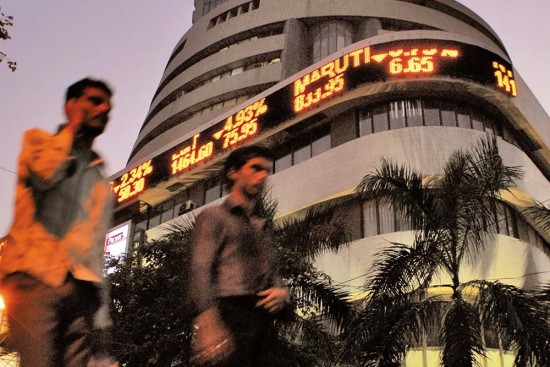 Bangalore-based professional C. Sangeetha is worried. “My financial advisor told me it was urgent for me to rejig my portfolio. The markets are in turmoil, and the stocks I own have plunged. I don’t know what to do. My husband retires next year. These are the only savings we have.” Pankaj Kumar, a government employee, has seen the value of his stocks decrease in the past year. “Markets have become so erratic,” he laments. Some have seen their recent investments vanish into thin air.

Even wealthy individuals and institutional investors find themselves on the same boat. Media reports indicate that foreign institutions withdrew billions of dollars from Indian stocks in the past few weeks. One of the richest Indians, Rakesh Jhunjhunwala, whose stock portfolio is estimated at more than Rs 12,000 crore, is in trouble. Some of the stocks that he owns have nosedived in the past 12 months—DHFL by 81 per cent, Edelweiss Financial Services by more than a third, and Escorts by almost 30 per cent. In a recent TV ­interview, he said he had never seen such pessimism on Dalal Street.

There is no denying the panic. As retail investors, who are struck with huge losses, seem completely at a loss about what to do, the big guys have either shifted to safer alternatives, or converted their investments into cash. Although a few experts urge people to stay in the market, or buy more as stocks are available for cheap, anxiety is the norm. Shankar Sharma, VC and JMD, First Global Stockbroking, explains: “The situation appears grim. We are hoping for a miracle, as are the markets. That’s what we call a hope trade.” 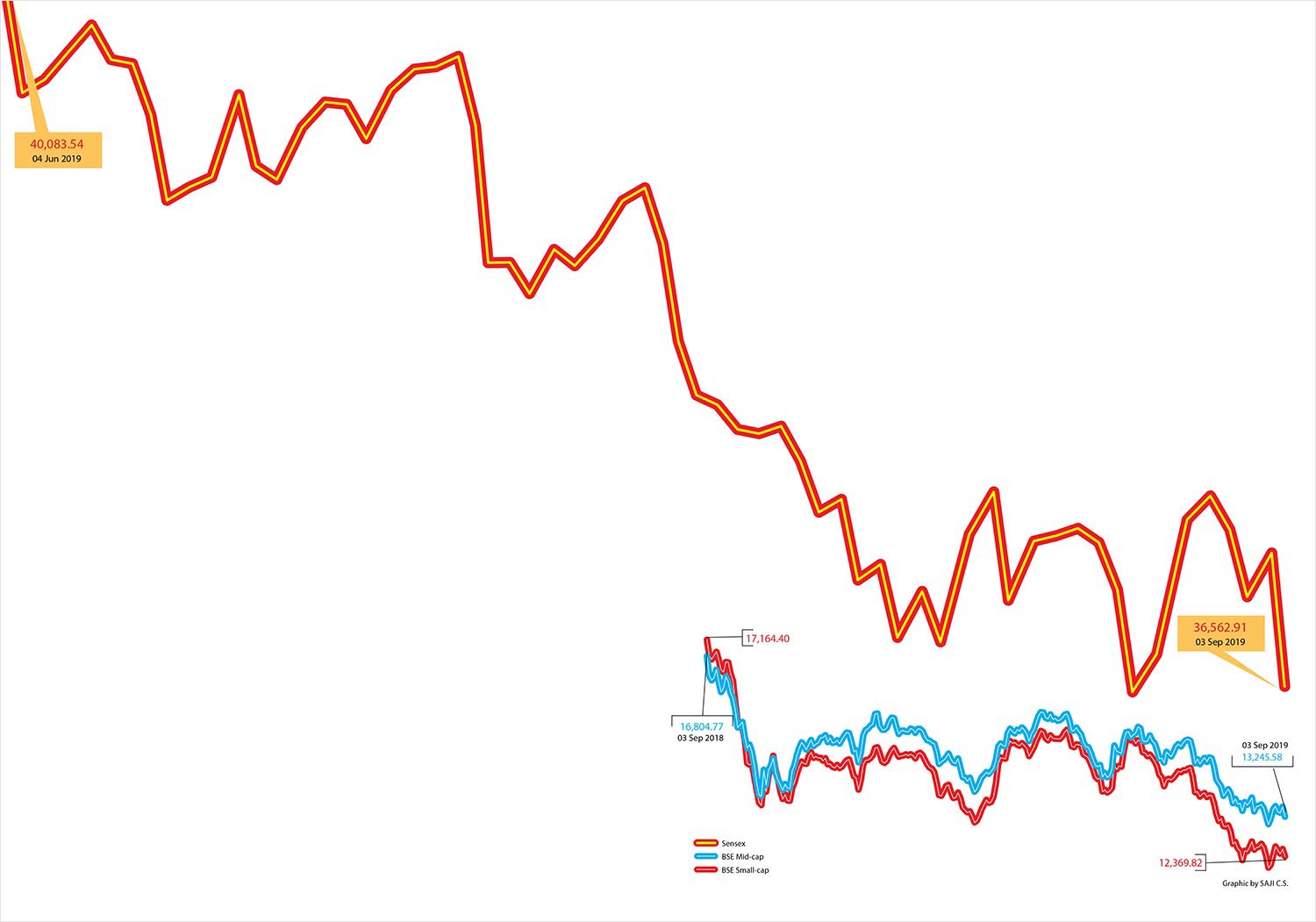 In the past 12 months, the S&P BSE Small-cap Index, which includes the stocks of small-sized firms, slumped by a quarter. In the case of S&P BSE Mid-cap Index, which comprises mid-sized firms, the fall was by a fifth over the same period. The BSE Sensex, which constitutes large companies, seemed to have stood its ground, and hovered in the 30,000-point range. However, over the past three months (June-August), the index declined by 10 per cent. And the slide is expected to continue over the next few weeks.

Experts contend that the Sensex was deliberately kept high. The beginnings of a nosedive were evident, when the index slipped by more than 12 per cent in less than two months (September-October 2018). But then it rose from 35,000 to almost 40,000 within the next seven months (November 2018-May 2019). In early June, it crossed the 40,000 mark, and the current downfall began around Budget 2019. The drop hasn’t stopped despite the few days when the Sensex goes up because of short-term good news.

According to Andrew Holland, CEO, Avendus Capital, large-cap indices are, and were, possibly boosted by the rise in a few select stocks. “Out of the 50 stocks that comprise the Nifty Index, only 10 have risen. The rest have fallen. If you take out these 10 stocks, the real value of the index would be 9,000 points, or much lower than the 11,000 level it is hovering around,” he explains. Agrees Sharma: “BSE Sensex is already at 28,000 (instead of 36,000-37,000), if you remove the top handful of stocks.”

A mix of internal macro factors, global trends, issues within India Inc, and specific stock market-related policies affected stocks negatively. For example, the slowdown in the Indian economy and the devastated state of manufacturing is evident. In the April-June 2019 quarter, the overall growth was the slowest in the past six years; manufacturing was down and out with a growth of a mere 0.6 per cent, compared to 12.1 per cent in the same quarter the previous year. Consumer demand for automobiles, houses, and consumer durables is down.

Devendra Pant, chief economist, Fitch Group, explains that the problem areas are a huge drop in private consumption, slack in private ­investments, and fall in savings. “This leads to structural growth slowdown. There is no quick-fix solution to the downturn, which has been in the making for the past few years. Hence, the recovery will take its own time,” he adds. His remedy is that the government focus on real ­estate and construction, which is the largest employer after agriculture. “Reviving real estate will be crucial from both investment and consumption points of view.”

On the global front, trade wars ­between the US and China, and also between India and the US, ­albeit at a lower level, Brexit and commotion within the European Union, and the depressed relations between Mexico and the US impacted Indian stock markets. “The interest rate reversal in the US raised concerns about the growth of Indian software in the near term. I feel that the deep corrections in Indian stocks are due to a 50:50 combination of Indian and global situations,” a Mumbai-based investment manager says.

Such international developments have actually hurt stock markets across the globe. Holland cites the example of the US, where mid-cap and small-cap stocks have lost 25-30 per cent, just like in India. Even stocks of large companies are down. In such a scenario, it is imperative for foreign institutions to withdraw from all markets, and seek safety, either in reputed government bonds like US Treasuries or cash. Hence, predicts Holland, they are not going to come back in a hurry. 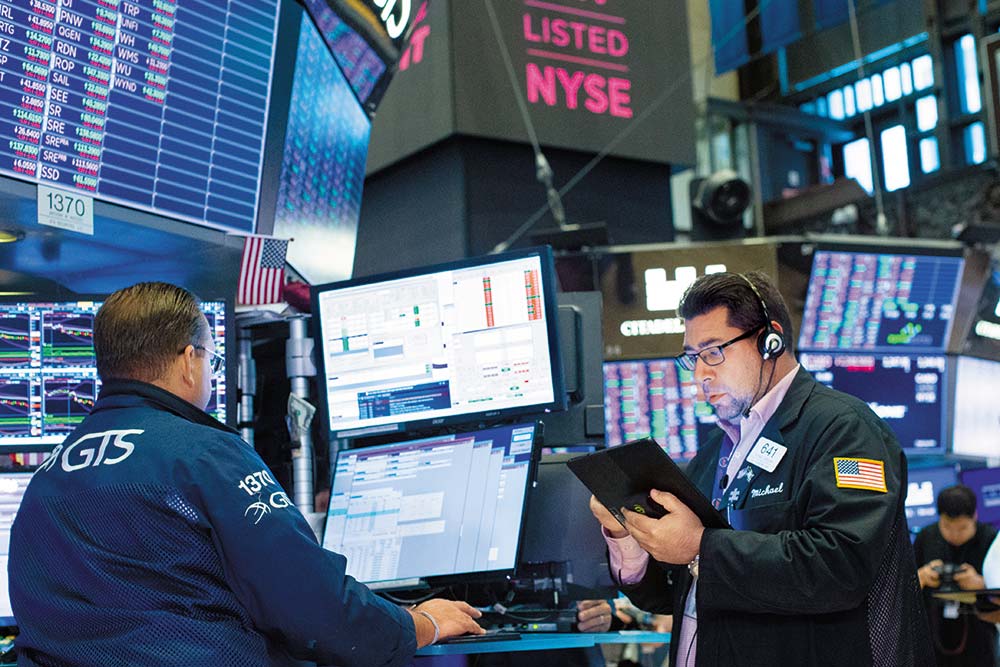 Markets have tanked across the globe.

Clearly, global and Indian macro factors dented the performance of India Inc and, hence, the valuations of Indian stocks. But there were deeper malaises within the business community that came to light in the recent past. The first was related to serious corporate governance issues. Apart from the small- and medium-sized companies, even the ­so-called ‘darlings’ of the stock market were implicated in boardroom scandals, which highlighted the complete lack of control and monitoring over the decision-making process.

Some of these included Infosys, ICICI Bank, Yes Bank, IL&FS, DHFL and Tata group amongst others. Yes Bank and Tata Group were involved in succession battles—the first amongst family members, and the second between two former chairmen, Ratan Tata and Cyrus Mistry. The head of ICICI Bank, Chanda Kochhar was removed after ­allegations of crony capitalism. The CBI is investigating the case. DHFL was wracked by allegations that it had ­siphoned off Rs 31,000 crore. The decline of IL&FS, a non-banking ­finance company (NBFC), signalled a huge crisis in the segment.

If this wasn’t bad enough, debt became the new sword of Damocles that hung over several Indian businesspersons, ­including many of the who’s who. When the new insolvency code was enacted in 2016, its purpose was to help banks lower their quantum of bad loans, and recover whatever money they could from errant promoters. By 2018, the code became so rigid that any company that defaulted was ­declared insolvent, and had to go through a “resolution” process, whereby it could be sold to a new buyer. Thousands of promoters lost control over their business empires.

Obviously, the stock prices of the companies that were ­declared insolvent or bankrupt (where there was no resolution) plummeted. In many cases, the prices tumbled from Rs 200 a share to a heartbreaking Rs 2. This was true of companies that were sold to new buyers too. The reason: ­investors had lost faith in these stocks, and they knew that recovery would take several months, if not years. It was better to be out of these stocks.

The insolvency code was enacted to help banks reduce bad loans, but it became so rigid that any company that defaulted was declared insolvent.

But there was an unintended consequence. Investors realised that there were hundreds of companies, including those owned by big businesspersons, in which promoters had pledged their shares as collaterals against loans. Worse, the sizes of their debts were huge. Since the insolvency code spared no company, not even the ones with ­political connections, investors envisaged three scenarios. The first was that firms would do well. The second was that at the first sign of trouble, lenders would sell the pledged shares to get their money back. The third, which was the most fearsome, was that the companies would be declared insolvent.

No one knew what would happen in the future; in the ­recent past, even the most successful business families were declared insolvent or bankrupt. Logically, institutional ­investors decided not to take any chances, and dumped these shares. This fear psychosis led to huge selling of stocks such as Zee Entertainment, ADAG Group companies, and Suzlon. Wealthy individuals followed suit. Retail ­investors were the last to catch on, but they too exited in a great hurry. A series of selling pressures hurt these stocks, and led to negative sentiments across stock markets.

More importantly, these activities created an unhealthy environment. In a November 2017 presentation, Deven Choksey, a leading Mumbai-based investment manager, said, “Market insiders always take advantage of this situation (sale of pledged shares), and act before others can. SEBI reacts and (may) punish these ‘insiders’ post-effect or post-damage. More importantly, the regulator acts after the damage to the confidence of investors.” This leads to a cascading impact.

Government policies further eroded investors’ confidence. In Budget 2018, former finance minister Arun Jaitley ­imposed a long-term capital gains tax on equity incomes of over Rs 1 lakh a year. This was followed by a super-rich tax on foreign and Indian investors by Nirmala Sitharaman, the current FM, in Budget 2019, which was rolled back. Such measures spooked the stock markets. Investors, especially foreigners, ran with their cash.

Market regulator SEBI played its own role in depressing sentiments. In its bid to clean up the system, it imposed two measures. The first was a recategorisation of mutual funds. According to a website, the regulator felt that mutual funds used fancy words such as “opportunities, advantage, and prudence” in their names to sound “seemingly lucrative”. The words, as well as the investment patterns, didn’t indicate the risks involved to investors. Hence, the rules were made inflexible.

From mid-2018, large-cap mutual funds that earlier ­invested in small-caps, which were riskier but gave higher returns, had to stick to stocks of large companies. So was the case with mid-cap and small-cap funds. This led to a significant churn—huge buying and selling—as the funds scrambled to organise their portfolios as per the new rules. This created further jitters in the market. This was the case when SEBI launched its new surveillance mechanism, and increased the margin money for dozens of stocks. This sucked out ­liquidity, and made it more difficult for people to trade stocks.

There was no respite for the investors, both big and small. They were cornered from all ends—local to global, boardrooms to stock markets. The bear hug (selling pressure) was all-­encompassing, as the bulls (buyers) ran into hiding.

By Alam Srinivas and Lola Nayar with inputs from Jyotika Sood