Offer They Just Have To Refuse

L&T grabs at Mindtree, whose promoters try to dissuade shareholders; the top IT firm is now at a crucial juncture 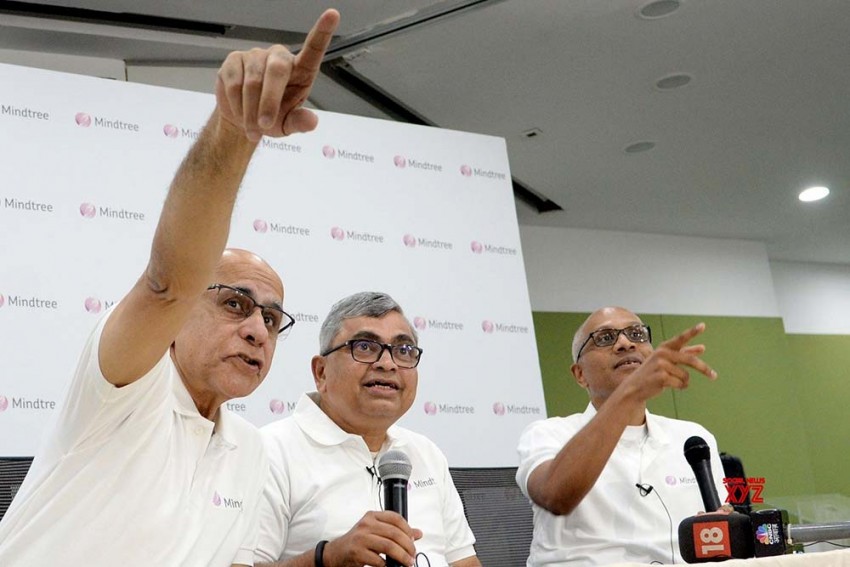 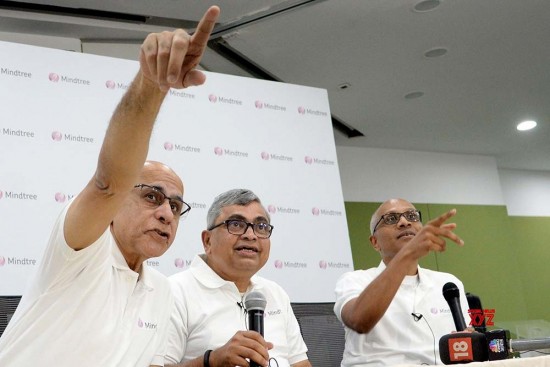 Hostile takeovers always make news. In the high-profile Indian IT sector, it makes for a bodice-ripping plot. While takeovers have been attemp­ted in other sectors, this is the first instance of it in IT, that too for a prominent mid-tier company.

On March 26, L&T offered to buy about 31 per cent in Mindtree’s equity for Rs 5,030 crore at Rs 980 per share of Rs 10 face value. Before this, it signed an agreement to buy out the 20.3 per cent stake in Mindtree held by V.G. Siddhartha, of Coffee Day Trading and Coffee Day Ent­erprises, the company that owns Cafe Coffee Day. L&T will purchase this at Rs 980 per share, totalling Rs 3,269 crore. L&T has also placed an order for on-market purchase of up to 15 per cent of Mindtree at a price not exceeding Rs 980 per share, with a total cost at Rs 2,400 crore. The total transaction cost for L&T will exceed Rs 10,700 crore.

Perhaps the most talked about hostile takeover bid in India was in 1983, when UK-based industrialist Swaraj Paul tried to take over Delhi Cloth Mills and Escorts Ltd through the stock market but had to retract. Other takeover bids that made news were India Cements-Rassi Cements in 1998, and Emami trying to acquire Zandu in 2008.

For Mindtree’s co-founders, the att­empted takeover bid is a grave threat to the firm they built over 20 years. “A hostile takeover by L&T, unprecedented in our industry, could undo all of the progress we’ve made and set our organisation back. We… strongly believe that the transaction will be value destructive for all shareholders,” they said in a statement on March 18. The Mindtree founders—Subroto Bagchi, Krishnakumar Natara­jan, Parthasarathy N.S. and Rostow Rav­anan—currently hold 13.32 per cent stake in the company.

Mindtree, explains Natarajan, was the first company to start a focused digital transformation business group in 2012 which has started delivering results. “Every research report indicates that we are a leader in the digital transformation services and every market report for the future indicates that digital is going to be the biggest spend in enterprises,” he told Outlook.

“So, if we look at the portfolio mix even within the information technology portfolio of L&T, almost 60-65 per cent comes from traditional services which are applica­tion management and maintenance, which are under significant cost pressure.”

While the move may be of strategic adv­antage to L&T, Natarajan says what Mindtree shareholders gain from this transaction is important. “They (shareholders) stand a chance to lose because since we called out this trend early and invested over the past five years, and now that the ground has been ploughed, wat­ered and the plants are starting to grow the benefit of that, for the next two-three years is what our shareholders will reap. In a forced move like this, it is likely that they will lose out on that,” he says.

L&T’s bid was sudden, but Siddhartha’s intent to sell his stake was known. As a shareholder L&T would be respected, says Mindtree.

L&T’s bid to acquire Mindtree started last year, but it announced its share purchase agreement with Mindtree’s non-­exe­­cutive director Siddhartha last week. In the ensuing uproar, the founders deci­ded to take matters in their hand—new options were explored, including share buyback. But on March 26, all of it was put to rest. The company formed a panel under board member Apurva Purohit to review the offer and recommend if shareholders will benefit by selling their shares or not.

Natarajan says the board is looking at several options. “We don’t want this distraction to, in any way, impact the business. The option we are focusing on is to make our case to our shareholders, indicating to them what we have delivered in the past 12 years after having listed, the returns we got, the future outlook, our leadership position in digital and how that will benefit them. We want to make the open offer ineffective by our shareholders buying into our story and staying with the company,” he says.

Natarajan adds, “Once the share purchase agreement (with Sidd­hartha) is executed, L&T becomes a large shareholder and we will respect them. To ensure that value creation continues in future, we will work out an arrangement fair to all parties.”

“The whole responsibility now lies on the independent members of the board of Mindtree because it’s not an emotional decision, it’s a business decision,” says Former Infosys board member V. Balakishnan. “They have to evaluate the open offer made by L&T, they should also talk to the L&T board and then come to a final conclusion whether this is in the int­erest of all stakeholders. Then, it is left to the shareholders to decide,” he adds.

A senior L&T official says, “The push is to strengthen our IT business, which is currently not very attractive. Acqu­ir­ing Mindtree would help us increase our growth rate. We are open to other acquisitions too.” He adds that L&T is aiming at a major stake (above 50 per cent) in Min­dtree by May and that gro­wth in the digital and IT market has led to this drive.

According to Reliance Securities, the main reason for L&T’s interest in Mindtree is its high digital revenue (around 50 per cent), new vertical focus, including travel and hospitality and greater presence in hi-tech and media, compared with L&T Infotech (LTI). L&T has said it will focus on cost synergies, which will aid Mindtree’s profit margins and in turn drive the return on equity accretion for the diversified inf­rastructure major.

Even if L&T’s takeover bid was sudden, V.G. Siddhartha had communicated his intent to sell his stake back in November. “There was tremendous interest bec­ause it is a company not backed by any large conglomerate and that after Info­sys we are the only billion-dollar company,” says Natarajan. He reckons two factors hindered a deal with investors. “The premium that a strategic investor was willing to offer was a differentiator,” says Natarajan. The second factor, he surmises, is that the final solution off­ered to Siddhartha could possibly have been more holistic, given that he would have had to un-pledge the shares first.

“I do believe that the open offer price of Rs 980 is not the right value for Mindtree’s potential because when you look at value, it’s not just current performance but also the future...how is it that the company is able to get to a winning position in the future and del­iver better returns. I think Mindtree is well-positioned to do that and that’s why we think the open offer does not reflect our real value,” says Natarajan.

“Shorn of the emotions, the only uncertain element is L&T’s plan. Will it merge Mindtree with its IT subsidiaries or ret­ain it as an independent company?” won­ders InGovern MD Shriram Subra­manian. L&T has said that Mindtree will not be merged with LTI and will remain independently listed. However, if taken over, it’s crucial for Mindtree’s promoters to stay on to guide the firm—a moot point, given the possibility of them losing their independence. Analysts believe that it is critical that Mindtree’s promoters and management stay on. In the IT industry, there have been instances when turbule­nce at senior management level has led to underwhelming financial performance. This is something L&T has to avoid.

The next couple of weeks would be crucial and would decide the fate of both the companies. Mindtree is, of course, in hectic parleys with investors to stave off the takeover attempt. But the scales are tilted against it. It rem­ains to be seen how the seasoned team of promoters steer Mindtree through these choppy waters.

By Jyotika Sood in Delhi & Ajay Sukumaran in Bangalore