Supreme Court's partial striking down of the Section 377 in September 2018 has given the LGBT community more freedom to express themselves. Mumbai's Third Eye Cafe is one such outlet offering a haven from prejudice 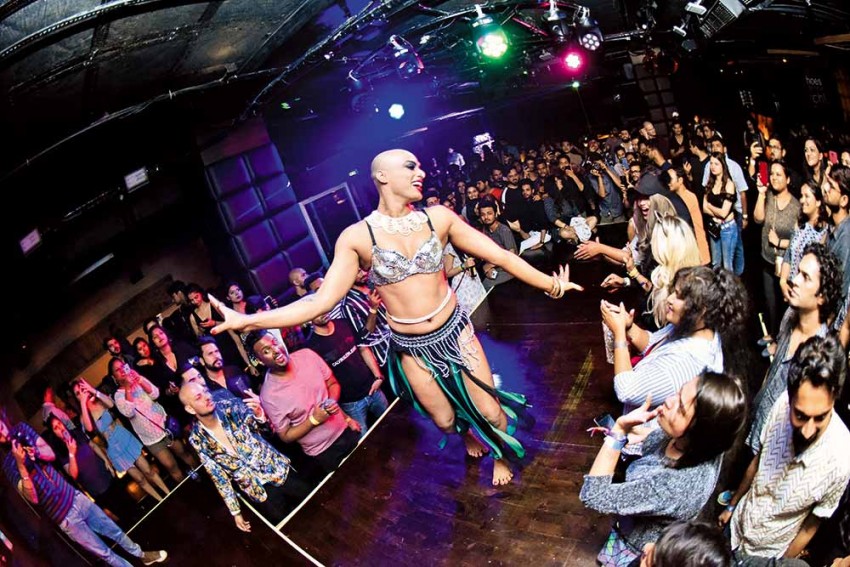 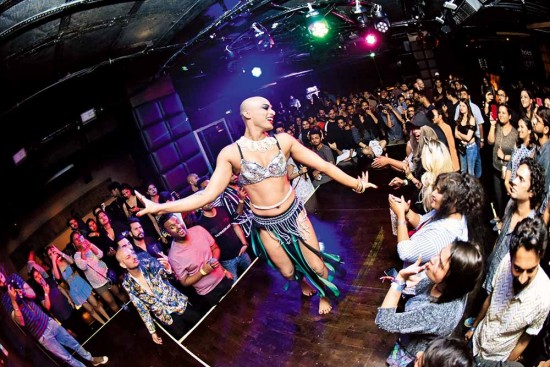 Maahi Pujari felt trapped and unwelcome. Her gender expression did not conform to society’s expectations, causing much consternation to her family. When she was just 13, she had to flee from home and beg on the streets of Pune. “I was the eldest child in a middle-class Maharashtrian household. Hon­­­­­our is far more important to us than money. Even after I left home, my relatives and neighbours who spotted me begging in a sari would complain to my parents. Why should my family go through that trauma because of me? I never went back home after I left,” she says.

Thirteen long, difficult years have since passed and life holds more promises than ever before for Maahi, a 26-year-old trans woman working in Navi Mumbai’s Third Eye Cafe. It’s an eatery that consciously and unabashedly embraces the marginalised third gender and provides the increasingly visible queer community a space to safely socialise without the fear of being judged.

“My life was a nightmare in Pune. People would treat us like stray dogs. But now, when I enter the restaurant, everyone asks how I’m doing. It’s a lovely feeling,” says Maahi. She’s been working at the cafe for over a year now, after having tried her luck as an LIC agent for six months. It’s an experience she would rather forget. “I was an assistant to one of the agents and only I know the torture I went through while I worked there.”

Established in 2017, Third Eye Cafe was specifically set up to help trans people find acceptance in mainstream society. “I have been working with the trans community since 2012 and tried to help them find mainstream jobs in the corporate sector, but failed. That’s when my business partners and I decided to start a restaurant that would be open to all­­—age, gender no bar. It was a way to normalise the presence of trans people in society,” says Nimish Shetty, cofounder of the café. One of the walls in the restaurant asks you to “be the change you wish to see in the world”. 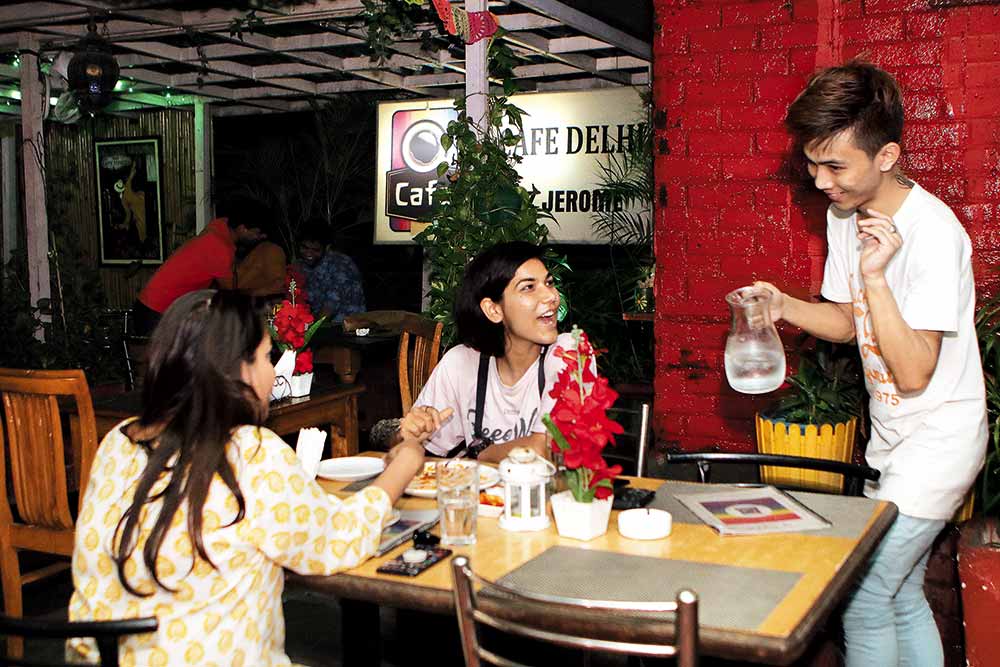 Guests enjoying a night out at Q Cafe, Dehi.

Jerome Cousin swore by the same dictum while setting up Delhi’s first queer café, Q, in April 2017. Hailing from France and calling the capital home for 18 years now, Jerome feels at ease in his bustling eatery decked with rainbow hues. “In all these years in Delhi, I never found a place for the gay community to interact safely. In my country, there’s no dearth of such venues. I thought it’s time for me to do something about it,” he says. Despite the SC’s partial striking down of the draconian Section 377 in September 2018, the restaurateur believes that only a miniscule section of the society has accepted the queer community wholeheartedly. “Mostly, it would be married people with family and children who would be concerned about going to such places and being questioned for it. They seem less worried now,” he says. Jerome plans to open a cabaret in Delhi by the end of this year.

When Supreme Court judge Indu Malhotra dec­lared to the world that history “owes an apology to this (queer) community”, it was perhaps the first step ­towards ­­ack­now­ledging­ ­an invisibilised group. A hostage situation that demanded redressal decades ago has catalysed visible change only now, observes celebrity chef Ritu Dalmia, one of the five petitioners against Section 377 in 2016. “We used to get a lot of guests from the community before 2013 (when the SC overturned the Delhi HC’s 2009 judgment which read down Section 377), following which their numbers reduced. Again, after the 2018 verdict, they are going out more openly and are not worried about outlets being prejudiced”.

With the queer community yet to be granted the right to marry, inherit and adopt, the fight for equality remains. But while they’re at it, the pride parade is in no mood to slow down. “Let’s make it a level playing field for our community in India first. Until then, the more noise we make, the better,” says Keshav Suri, executive director of the The LaLiT chain of hotels, which identifies itself as ‘gender agnostic’. Suri, consciously chose not to hide his homosexuality from his colleagues at the outset of his career. 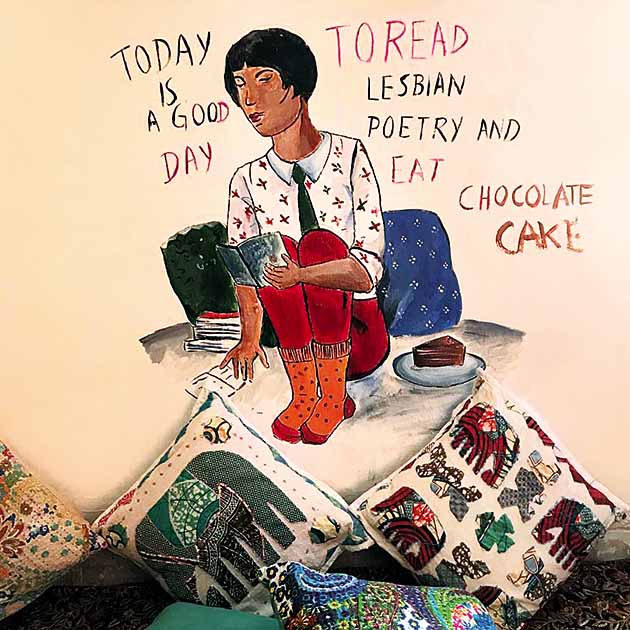 “We need spaces where queer people can express themselves freely,” says Upasana of Amra Odhbhut.

His brainchild, Kitty Su, already in its eighth year, is more than just a group of luxurious night clubs; it’s a formidable flagbearer of inclusivity. “The character of Kitty Su was basically me in drag. Of course, I killed her off at the end, but it started with the fundamental concept of me as a drag queen,” the hotelier says. After the 2013 order, Suri was encouraged to introduce special queer nights at Kitty Su to ensure the queer community was heard. The club eventually went on to become the launchpad for some of India’s most famous drag queens, including SaReGaMaPa contestant Rani Ko-HE-Nur. The Orlando gay club shooting in 2016 acted as another major impetus for Kitty Su to power through. “Not just in Kitty Su, we have the pride flag at every LaLiT hotel. Elphie, our rainbow-coloured, gender non-binary mascot, is in each one of our hotel bedrooms. We are launching Elphie’s story as a children’s book soon. A drag queen will release it by reading aloud to a young audience,” Suri mentions,

In their quest for diversity, The LaLiT group not only hosts queer artistes and DJs regularly, but also employs people from the LGBTQIA community at every operational level. “Even before the 2018 SC judgement, we forced insurance companies to offer coverage for same-sex couples. We also insure sexual reassignment surgeries for our trans employees,” the newlywed entrepreneur mentions.

The very existence of exclusive queer-friendly spaces is indicative of the effort required to make every inch of society accessible to the community. Such reserved spaces emanate from the need to emancipate sections awaiting their turn for justice and equality. Upasana Agarwal, the founder of Amra Odhbhut Cafe in Calcutta, believes it’s imperative to have safe venues for queer people where they can express themselves freely. “That is what Amra Odhbhut is all about. We aren’t running full-time yet, but we’ve been trying to accumulate funds and hopefully, we’ll achieve full-time status in a month or two,” says the 24-year-old, whose outlet was originally called Adamant Eve. The current name borrows from a Tagore song that celebrates the power of the youth and literally translates to ‘we are queer’. Since the venue opened in 2016, it has hosted several events to foster dialogues on LGBTQIA issues, including a poetry evening with the gender non-conforming artiste, Alok Vaid-Menon. 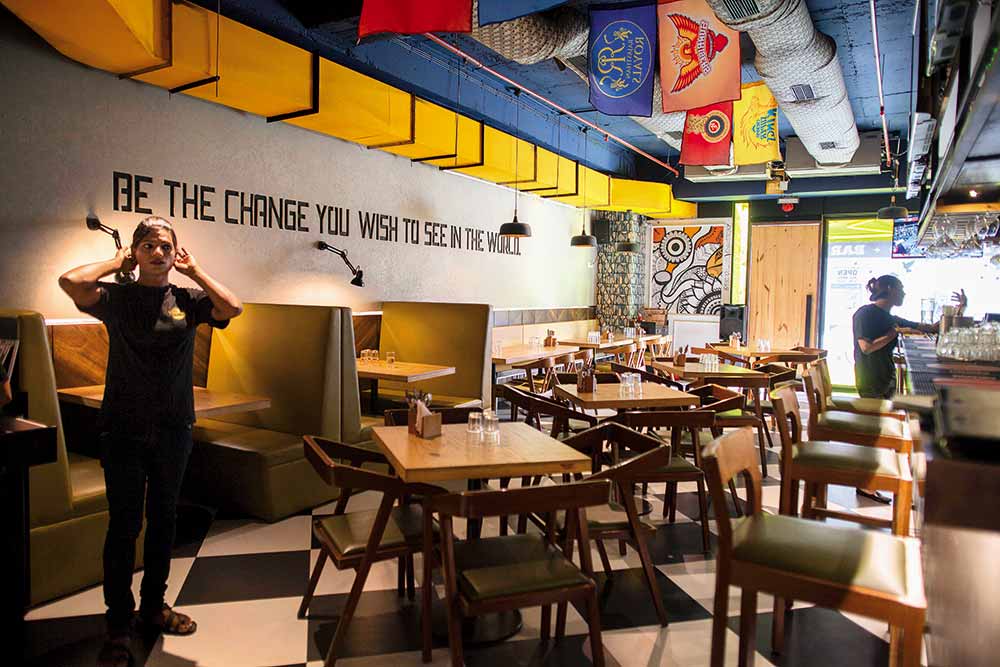 While some, like Third Eye Café, plan on setting up shop in more Indian cities and flaunt their ‘queer-friendly’ label, others never expected to earn the badge. Bangalore’s The Humming Tree, a trendy lair for the city’s youth, seems to have unknowingly won over the queer community. “We never went out seeking the tag, we were just friendly to everyone. There’s no question of not being inclusive,” says founder Nikhil Barua. Established in 2013, the pub-restaurant has organised ‘Social Tuesdays’ for charitable causes, including several LGBTQIA nights. In 2016, during their New Year revelry, they allowed couple entry for same-sex pairs, a first for the city. “At the end of the day, people who’ve never been discriminated against can’t even imagine what it’s like to live with such stigma. Providing spaces to have such conversations is the least we can do,” says Nikhil.

As more ‘exclusive’ venues propagate inclusivity and colours of the rainbow conquer newer territory, perhaps an era of equality might come when such spaces are not needed anymore. “Ultimately, we have to make sure that all places are equally friendly and safe for everyone,” says Nitasha Biswas, Miss TransQueen India 2017. “After all, there is no community except one—that of humanity.”