Modern and interactive form of education is becoming popular among students. The non-restricted approach helps in a collaborative approach among researchers 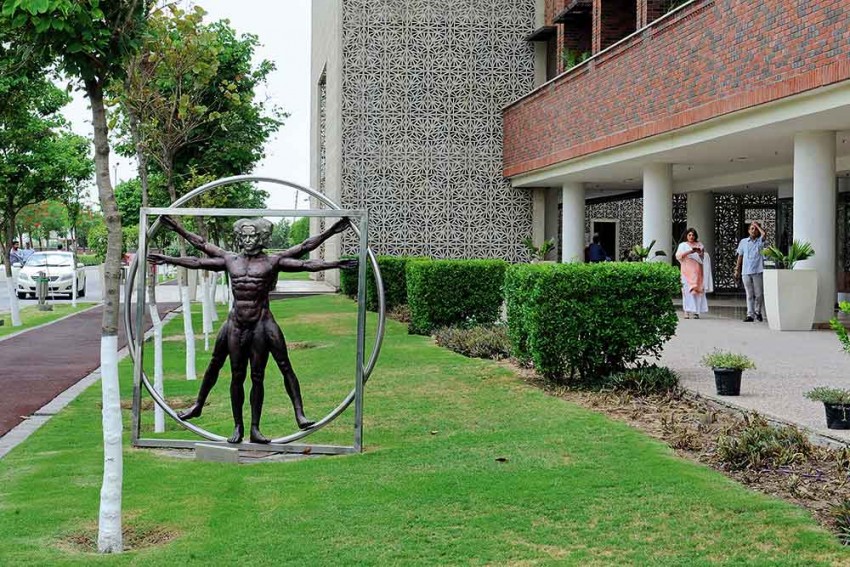 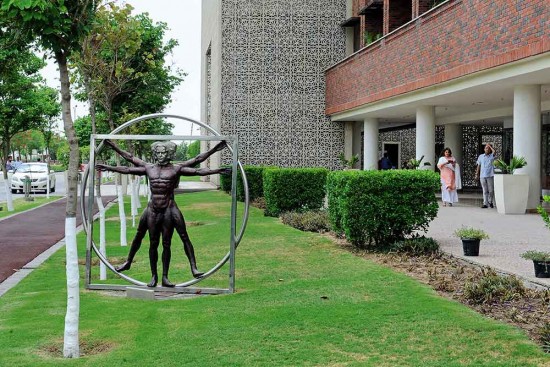 Higher education in India, in which a type of pedagogy largely unchanged from colonial days has held sway over decades, is reinventing itself and borrowing heavily from ancient Indian traditions as well as newest forms of the West. A freer system of liberal arts has, of course, been an old Indian tradition, before the British imposed a structured and fixed cur­­ri­­culum model. At a time when the internet revolution has fulfilled William Blake’s prophecy—“hold infinity in the palm of your hand”—it is time for ano­­ther paradigm shift. And can there be a goal in liberal arts farther than what Albert Einstein once said: “The value of an education in a liberal arts college is not the learning of many facts but the training of the mind to think something that cannot be learned from textbooks”?

A drive from Delhi to Ashoka University in Sonepat on a scorching summer’s morning for the graduation ceremony makes one nostalgic for one’s college days. Malabika Sarkar, principal adviser, Ashoka University, says, “The subjects offered include traditional sub-fields within the humanities, social sciences, natural and mathematical sciences but desi­gning of the curriculum and course structure has made the Ashoka experience significantly different from any other Indian varsity.”

At Ashoka, one realises that it offers a modern, interactive form of education. Students say that Ashoka encourages both critical thinking and conversations across disciplines. For example, a major (or honours) in one field may be combined with a minor in another. Such ‘conversations’ across disciplines is de rigu­eur—an inter-disciplinary app­roach borrowed from the Western, particularly American, model.

Simran Thapliyal, an Eco­nomics graduate from Delhi University who is studying in Ashoka says, “My experiential learning programme was in Ashoka University. What I got here was a hands-on exp­e­rience. My peers will agree that education in other repu­ted colleges is very restricted. Ashoka gives you freedom and flexibility.” 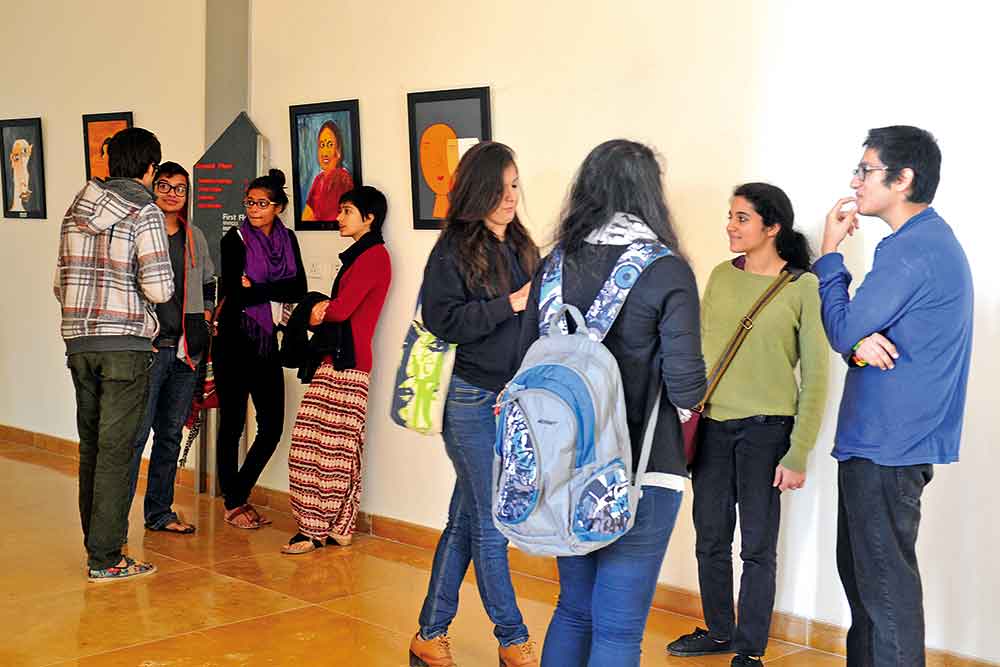 Students interact outside their classroom in Ashoka.

Near Hyderabad, a bunch of youngsters at the imposing Golconda Fort ask questions to locals, tourists and ASI officials, taking copious notes. Surprisingly, it is part of an admission process to a university. After their admission interviews they need to write an “immersive essay” about their experiences. Similar tours are held for applicants from other cities—at Ulsoor Lake in Bangalore, Connaught Place in Delhi and Dakshin Chithra in Chennai. Welcome to the “immersive admissions” of Krea University, a liberal arts varsity that opens its doors to its first batch of undergraduates in August this year.

“The essay is an important part of the admission process as it judges the candidates’ ability to connect with their surroundings. We do not conduct an entrance exam. They have to do multiple things—a reflective essay on any subject, group discussions and then be interviewed by a faculty member,” discloses Abdul Kalam, dean of admissions, Krea University. But this is the second stage—in the first stage of online application, candidates can attach a video/audio file about their aspirations and their extra-­curricular activity. Their 12th standard board examination marks are given only 35 per cent weightage.

Economist Sunder Rama­swamy, vice-chancellor of Krea, says screening only gets you good raw material for the next three years. “So we carefully weave a few gui­ding principles…. We call it ‘interwoven learning’ that gives flexibility in choosing subjects and builds value system.”

Indeed, visiting classrooms of the new liberal arts universities makes one realise how different they are from the rest—from the way courses are held to the involvement of professors. “We could just call our professors at any time…they are always there to help us out. I felt very res­tricted with economics; I wanted to know more about other fields. The Young India fellowship at Ashoka helped me gain knowledge of other subjects,” says Thapliyal. 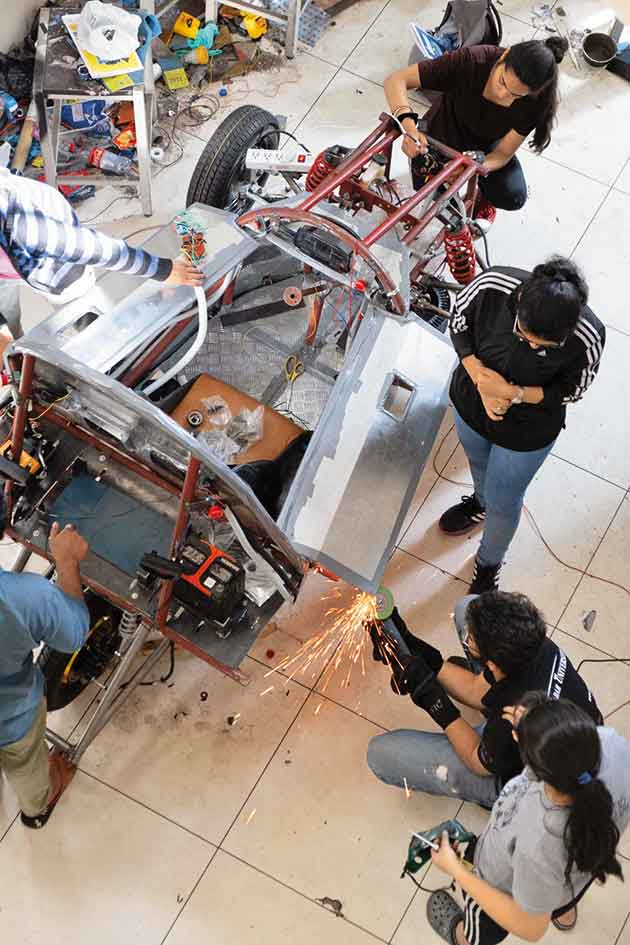 Ramaswamy explains that ethics, a sense of history of the discipline, the importance of writing and communication, use of data, the big unanswered questions and design thinking is hardwired into the learning process. “For example, a maths student would realise the importance of technical writing and also the history of his subject as both are interwoven,” he points out. Students, too, get the freedom to pursue unrelated subjects to their major. “It is said that C.V. Raman’s best paper was on the acoustics of the mridangam. Surely, the musician in him made him a better physicist. Your students will be better at something if we expose them to something else. A math major, if exposed to economics and music, is bound to bec­ome better at mathematics,” Ramaswamy argues.

Ashoka pays great attention to research. They’re committed to creating a research-intensive space open to collaboration with researchers outside.

Asked to compare Krea with Ashoka, the forerunner of the new liberal arts universities, he said that Ashoka was a pure liberal arts movement while Krea’s interwovenness is aimed at taking liberal arts to the next level. To do this, top performers from fine arts have been drafted to teach dance, theatre, music etc. Before setting up Krea the core team studied 16 universities and colleges across the world, before arriving at Krea’s distinct identity.

Krea’s also believes in creating porous boundaries by letting the real world impinge into the varsity experience. “The world is complicated and we’ve to weave the external envir­onment in the progra­mme. Students, therefore, are exposed to car­eer talks, executives, journalists and other specialists at residence. The idea is to prepare them for the world,” says the VC.

While a three-year graduate course is the stock option, Krea also offers a fourth year advanced diploma course for those who want to spend a fourth year. This will also let them apply for a one-year master’s degree abroad. Even lateral entry for graduates from other colleges to this adv­anced course is being contemplated.

But what can one expect of a graduate from Krea at the end of her three years? “They should know how to ask the right questions, think critically, be curious, have the ability to communicate and connect dots across disciplines. That would help them stepping confidently into any field they choose—academics, government services, social sectors or the corporate world,” replies Ramaswamy. 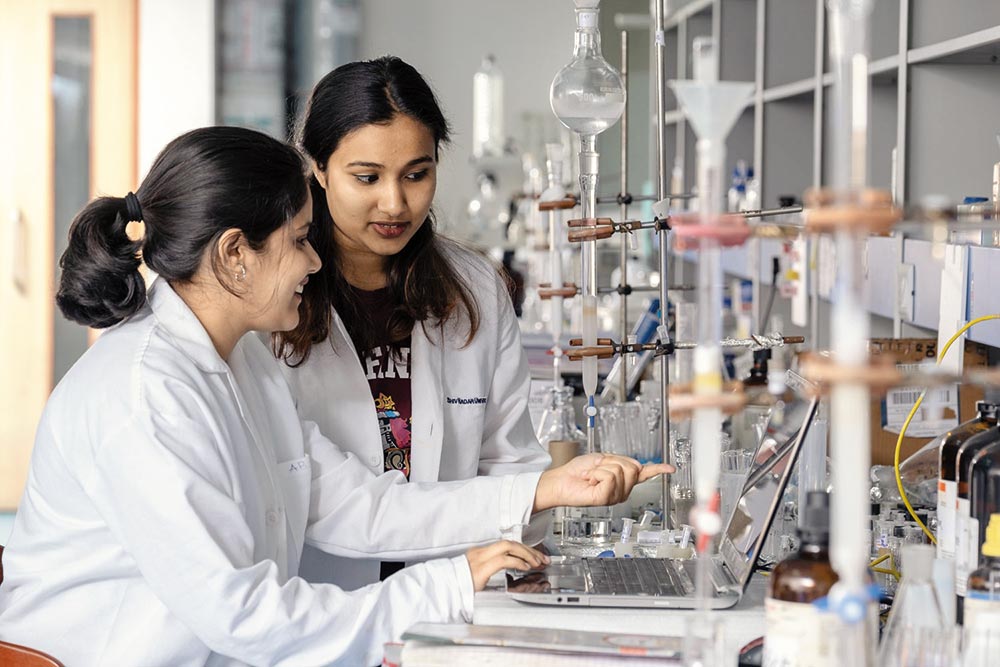 Students at a lab in Shiv Nadar University.

Crucially, the faculty at Ashoka pays equal attention to teaching and research, emp­owering students to contribute to knowledge through their own work, thus creating a band of researchers. For the sciences, Ashoka provides state-of-the-art laboratories and multifaceted research support. For all academic disciplines, enhanced library facilities are being provided. The academic community, faculty and project fellows are committed to creating a research-intensive environment open to collaborative work with researchers outside, just as in top global universities. This, believes Ashoka, is the true foundation of a research university—a commitment to mentor young minds and a commitment to the country and the world for knowledge production through research.

Teaching students to think, critically and clearly, without the narrow constraints of a discipline is the ultimate goal of all new liberal studies programmes.

In India, education was fractured for decades—teaching done at universities and high-end research at research institutes. The creation of research universities, following the best international models, is the way forward and the mission to which Ashoka University is committed.

Niharika Yadhav, a student of Economics at Ashoka says, “What Ashoka has given me is a holistic approach to life. In economics, it helps me grasp ‘poverty in our country’, say, from the point of view of history, socio­logy and anthropology. The culture of conversation is liberal too. The mode of teaching is highly interactive. The clubs and societies here are run by the students. We have weekly debates and seminars…all this makes Ashoka stand out.”

Liberal arts as sought to be practiced by these schools is the need of the hour—for real problems on the ground demand real solutions and need tools and concepts from multiple disciplines. Rupamanjari Ghosh, Vice-Chancellor of Shiv Nadar University says, “A broad-bases education helps, for example, an engineer to be a real problem solver, since one cannot solve problems without understanding their context, even with a grand knowledge of engineering.”

Teaching students to think—critically and clearly—without the narrow constraints of a discipline is the ultimate goal of all new liberal studies programmes.  A vocational deg­ree prepares students for a single career, the kinds of which are disappearing—liberal studies give them skills that are needed for high-end jobs, even in the face of sev­ere threats from automation and artificial intelligence,” adds Ghosh.

For The Innovative, There Is Life Beyond IITs, IIMs, Welcome To The World Of Prayaas Shala