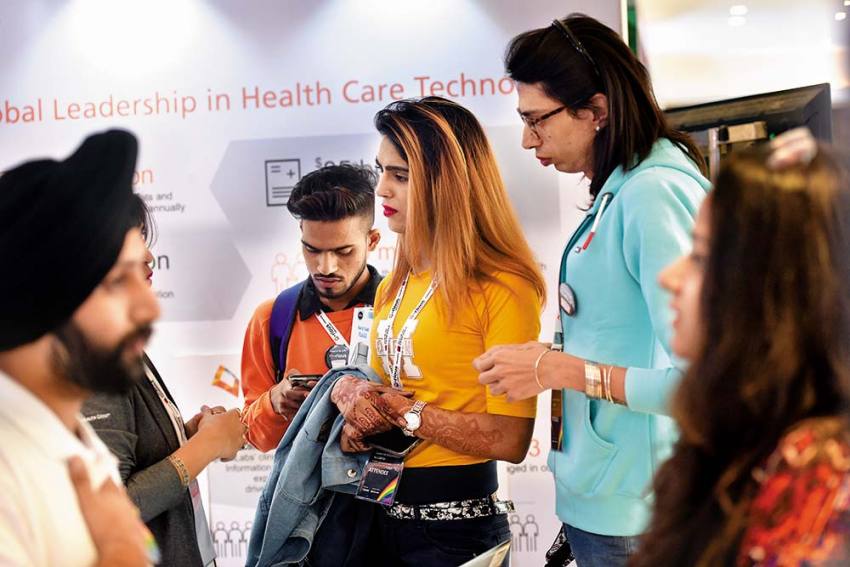 Rise
Job fairs like this one to attract other gender workers have become common in India, and within India Inc
Photograph by Tribhuvan Tiwari
February 14, 2020 00:00 IST Fair, Fairs & Fears 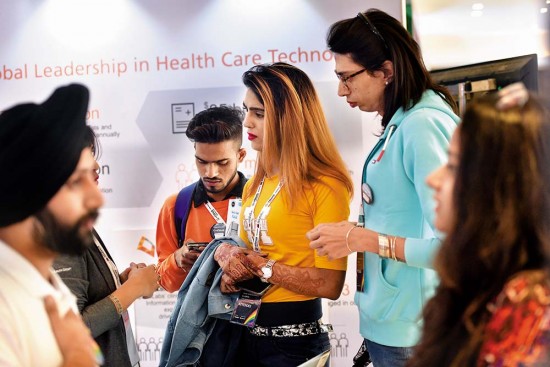 The transition is difficult. What will be your reaction if a male office colleague suddenly decides to become a woman? Some may not believe it, and others may think it weird. But, for the one who makes the transformation, it is an act of extreme courage, especially in a still conservative society like India.

Take the example of Ratrish (trans-woman). After the 2013 Supreme Court verdict that maintained that same-sex relationship between consenting adults was a criminal offence, and before it was annulled in 2018, she joined the movement to uphold the rights of the community. In 2014, she grew her hair, and shaved off the beard. Her attire changed.

While Ratrish was still in the transition phase, an office co-worker mocked her in the washroom. The latter said that she had no right to be in a male toilet. Since, at that stage, she didn’t look like an alpha-male or didn’t wear woman attire, she understood the conundrum of her colleagues. She talked to the HR department, and asked them to change the gender-based toilets in her Kolkata-based organization. She was lucky; the firm immediately built a gender-neutral or unisex washroom. Ratrish, who doesn’t want to disclose the company’s name, says, “It’s all about not ignoring. I never ever ignore. It’s always best to talk to the people, and have a discussion to sensitize them. My personal experience is that it impacts in better ways. Ignoring such incidents implies that you can’t face it. And if you can’t face it, how can you expect others to face you.”

While Ratrish was fortunate, her friend, Sandeepta Das, went through a struggle. A graphic designer by profession, the latter had to freelance for years before she landed a job. To prove her worth, she had to do free assignments, and had to tackle sexual advances. “People think transgender means easy sex, and I am sick of this mentality,” says Sandeepta, who works as a graphic designer and production associate at Accenture in Bangalore. 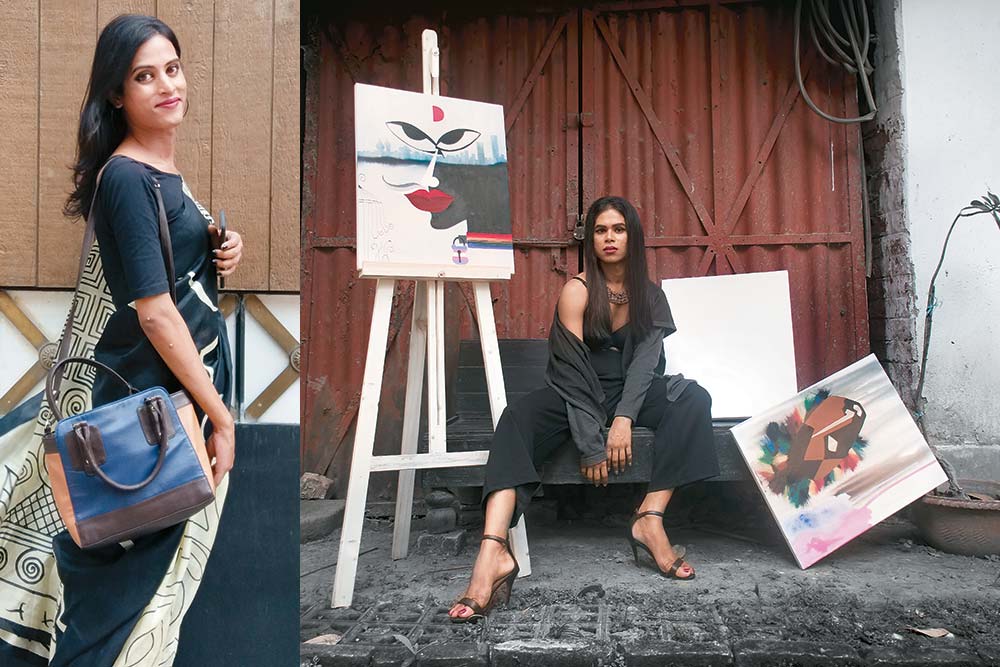 Ratrish (Left) feels that it’s all about not ignoring the issues. Sandeepta struggled for years, and remained a freelancer, before she landed a comfortable job with Accenture

In 2014, M. V. Lee Badgett did a report for the World Bank, which was titled ‘Economic Cost of Stigma and the Exclusion of LGBT People: A Case Study of India’. It said that discrimination involved inefficiencies that reduced the productivity of labor and, therefore, economic output. A small but growing set of studies, both qualitative and quantitative, demonstrates that it is prevalent in Indian workplaces. For example, a 2013 survey of college-educated, white-collar LGBTQ workers in India found that 56% experienced discrimination based on sexual orientation. Constraints on labor supply reduce their economic contributions. Badgett added that practices such as prevetion from formal education and pressures to give lower returns do lead to economic losses.

According to Census 2011, 490,000 individuals of all ages reported the “other” option (neither male nor female), or about 0.04% of the Indian population. Out of these, 66% lived in rural areas. Many observers believe that the actual figure is much higher given the unfamiliarity with the option, concerns about the quality of answers coded by enumerators, and the likely underreporting by transgender people worried about revealing a stigmatized status to the government.

What is worse is that a mere 38% of the third gender respondents worked, which was lower than the overall average of 46%. These third gender workers also appeared to have less secure employment; only 65% were employed for at least six months of the year, compared with 75% of the general workforce. 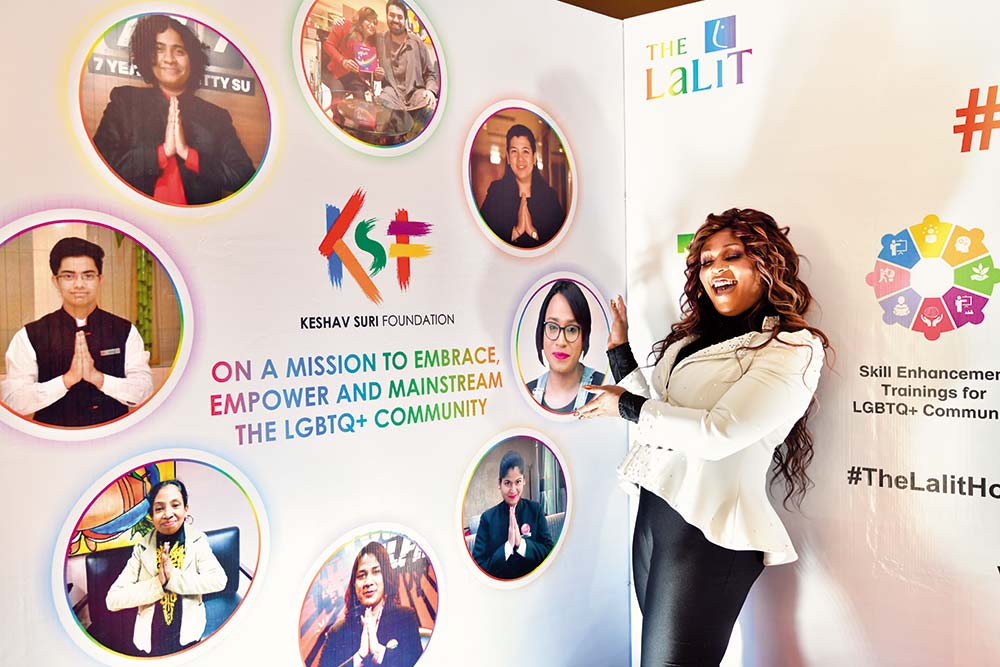 Although state governments have transgender welfare boards, and the central Ministry of Social Justice and Skill India looks at programs for LGBTQ population, it’s not enough. But there are a few successes; the Kochi metro employs members of the trans-community. However not all official departments are as open, and there is a long way to go.

Raghav (name changed), who works as a make-up artist with VLCC, says, “Private companies are taking baby steps. I remember seven years back, I was forced to dress-up like a male, as I didn’t get any employment opportunities because of my sexual orientation. My body language was a strong factor that portrayed me as a female, but because I was born a boy and had to take care of family, I had to continue as a male.” But she was a good make-up artist, and her company often sent her to other cities for bridal make-ups. “Once a bride said that she didn’t trust my capabilities and wanted her money back. She preferred to get her bridal make-up done by a junior artist, just because of my body language and the way I speak.” She adds that she tried for government jobs, but they didn’t match her caliber.

A 2016 study by MINGLE found that 40% of the community faces harassment at workplaces, two-thirds hear homophobic comments and jokes, and a fifth were troubled by their immediate managers and HR departments. There are issues of pay disparity; a trans-person is offered lower wages for the same work and skill-set.

However, the good news is that India Inc seems to be catching up. Lakshmi C., MD and head of human resources, Accenture India, says, “In our organization, ensuring an inclusive environment is a key part of our belief that equality drives innovation. Our research shows that people across gender identities, sexual orientations, ages, abilities and ethnicities show a stronger innovation mindset in more equal workplace cultures. We are committed to providing a safe and open environment for our LGBTQ people to share their experiences, inspi­ring not just other members of the community, but also sensitizing non LGBTQ people.”

At RISE, a job fair for LGBTQs, 35 firms took part. They gave instant offers, which were accepted by workers in 24 hours

The duo says, “We both have spent years in the diversity and inclusion space while working in the corporate world. What struck us was that there were many organizations, which worked to create an eco-system. We found that many of them were struggling to find a way to reach out to the ‘talent’ pool within the LGBTQI community. At the same, the community was par­tly hidden and those out, weren’t always sure of which organization would be ‘safe’.” So, they worked to bring different minds, practices, case studies and opportunities so that people could ‘rise’ to bring social change.

The biggest surprise was that 35 companies took part. There was a diverse mix of MNCs, Indian firms, and startups from sectors such as IT/ITes, banking and financial services, hospitality, and manufacturing. These included Uber, BNY Mellon, The Lalit, Allegis Group, Capgemini, Deutsche Bank Group, Goldman Sachs, Godrej, HSBC, | Pride, Intel, JP Morgan, MasterCard, McKinsey, Nielsen and VIP Industries. The efficiency of design to ensure maximum conversion led to the first job offers and acceptances within 24 hours.

While Sandeepta got an opportunity through RISE, Ratrish doesn’t support the movement. She says, “When you are talking about inclusivity, how can you have an exclusive platform. It’s discrimination if you see through my prism.” Others feel that economic inclusion cannot be done through separate fairs. “If you have to show inclusivity, you don’t have to ask about gender or hold special fairs. You just publish that the job-profile is gender-neutral,” says a senior HR manager. Ironically, in the same vein, he adds that his organization has employees from the community, but doesn’t allow them equal opportunities in terms of salaries, promotions, and important projects.

But what’s happening is that more firms now provide a host of benefits irrespective of genders. These include medical cover for gender reassignment surgery, mental health consultation, mentorship and counseling programs, and seve­ral on-ground and digital engagement activities such as cafeteria connects, bay connects, gamification, quizzes, videos and contests. However, the rural labor force still has to come out of the shackles. Take the case of Preeto, a transgender, who was abandoned by her family, and given to a group of hijras in Haryana. She says that the movement for inclusiveness of the community has to come from rural India too, where kids and youth are discarded, or married to mitigate the impact of stigma and discrimination. At present, the movement is urban-centric.

Historically, the Indian culture accepted the LGBTQ community. Historians deem modern societal homophobia as a hangover from the European era, which introduced Section 377. The Supreme Court’s landmark judgement in 2018, which decriminalized gay sex, provided an opportunity for the society to become more inclusive. As per a recent report, more diverse organizations report higher profitability and outperform their compe­titors by 25-30%. Beyond laws, there is the bias and prejudice built into us from lifetimes of brainwashing. The truth, as ever, is gray. When I first met her in a bank in the US, I felt she was different. My colleagues told me later that she had been a man. But the more we spoke and discussed work, I realized that she was a professional – someone who was good at her job, and took pride in it. As my bias melted away, I found myself enjoying the discussions; the experience was an eye-opener. The 90 million LGBTQ community holds the key to an immensely talented and diverse workforce, which is ruling the $1 trillion pink economy. Economically and socially, it makes immense sense for the corporate sector to tap into this diversity-rich pool.

However, the situation on the ground is still not conducive to its extensive participation. It faces discrimination and harassment. A recent UNESCO report provides details about students being beaten and berated for being “effeminate”. The masked faces in the now-famous ‘Pride Parades’ are representative of the need to hide in a society that doesn’t accept the community as “normal” human beings. The issues around inclusion centre around ignorance, fear or apprehension. In our experiences, we found organizations that were willing to talk about gender diversity, but were averse being sexually diverse. Senior managers cited several issues such as the lack of requisite infrastructure, insensitive co-workers, workplace bullying and name-calling, and discrimination at workplaces.

Organizations need to recognize that this community is a formidable force. One of the first things, the former need to do is to consider the latter as an employable resource. If they can push for gender balance, they need to initiate steps to induct LGBTQs. Workplace harassment needs to be addressed. Including sexual orientation and gender identity in non-discrimination and anti-sexual harassment policy is an important step. Gender neutral washrooms give LGBTQs the liberty to be who they are without conform to the binary gender classification. HR managers need to go beyond the regular. Homophobia is not desirable – not for individuals, organizations or society. We need to shun our disregard for those who are different. The first step is accepting the existence of LGBTQs. Make the effort to know them better, and treat them as “normal”. Value their professional competence. As SC Justice Chandrachud said, “It is difficult to right a wrong by history. But we can set the course for the future. It is about people wanting to live with dignity.”