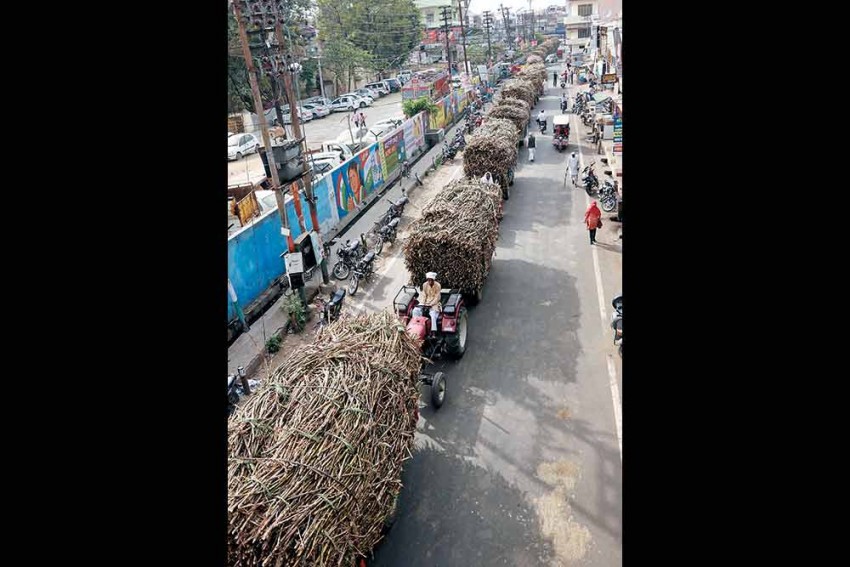 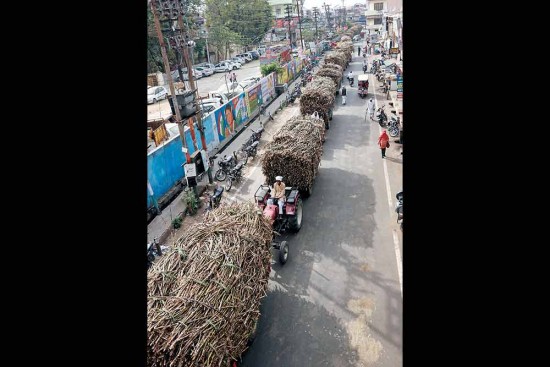 The last time Mohammed Hanif, a sugarcane farmer of Shamli in Uttar Pradesh, got any money for his produce was on December 7 last year. He has no option but to continue transporting sugarcane to the Titawi Sugar Complex in Muzaffarnagar and wait for the dues which have mounted to over Rs 2 lakh for about 1,000 quintals of his farm produce. Stories like that of Hanif abound in this sugar bowl, a fertile swathe of land where tall stalks of sugarcane sway in the gentle breeze, ready for harvesting. “We have no option but to keep selling our stocks to the mill. We will do so till May-end. Hopefully, we will get our payment sooner this year...,” Hanif tells Outlook.

The plight of Shamli’s farmers is but a microcosm of the country’s sugar industry—the world’s second largest after Brazil—which is facing a production glut for the second straight year, leaving thousands of farmers with huge unpaid dues. Government data shows unpaid dues of Rs 25,000 crore as on February 20. The government says Rs 35,000 crore dues have been cleared till that date. Under India’s government-controlled sugar pricing, farmers get what is known as fair and remunerative price (FRP). The last FRP change was done in July last year when the Centre increased the minimum price sugar mills pay to cane growers by Rs 20 to Rs 275 per quintal. Mindful of a potential backlash by sugarcane growers in the general elections, the Centre has asked banks to provide soft loans to the mills to enable them to clear the dues.

Abinash Verma, director general of the Indian Sugar Mills’ Association (ISMA), however, says the mounting “overdue payment is simply a cash flow problem”.  Stocks with sugar mills today are the highest ever; while production has risen to around 32 million tonnes in the last two years, consumption remains at previous levels of 26 million tonnes. “We will be closing the sugar year on October 1 with about 13 million tonnes of stocks, the highest ever...The current level of stocks will be over 25 million tonnes, which at Rs 35 per kg would mean that over Rs 80,000 crore of working capital is locked up..” Verma adds.

In Shamli, sugarcane is the dominant crop, accounting for over 70 per cent of the cultivation. Delay in harvesting and payments have a direct impact on sowing for the next crop.  While many of the farmers also grow other crops, Kamil Hassna, another farmer, says the first choice remains sugarcane as wheat and rice don’t fetch as much returns. Out of 50 bigha land owned by Hassna and his brothers, they grow sugarcane in over 40 bighas. “Last year, we got payment after eight months.  So far this year we are yet to receive any payment though the mills have been operational for the last five months,” says Hassna, whose dues have mounted to Rs 4 lakh.  The amount is exp­ected to go up by the time he completes harvesting and supplies the produce to the assigned mill.

Sudhir Panwar, an activist and sugarcane grower in Shamli, blames what he calls the “sugar lobby” for the problem. Last year, the central government had reintroduced the quota system, reversing a 2012 decision, under which the government decides the quantity of sugar to be released every month by the mills in the market or for exports. While this move was meant to prevent any sharp fall in prices, “the move to create a buffer stock and have quotas has now rebounded... without stocks to sell, the sugar mills have no money to pay the farmers,” says Pan­war, who is also upset that the state government has not increased prices despite higher inputs costs, whether of diesel, insecticides, fertilisers or labour.

Rakesh Sharma, who grows only sugarcane on his 120 bigha farm, says cane area has grown over the last few years with new, short-duration, high-yielding varieties becoming available. While productivity in the district was hit due to delayed and untimely rain this year, larger acreage has ensured that total production was not affected. “Over the last 2-3 years, the recovery of sugar from cane has risen from 9-plus per cent to 12-plus per cent, leading to higher sugar production. This year, the farmers’ agitation for 15 days over payment delays has extended the crushing season,” says Sharma, who has so far received only 15 per cent of his Rs 10 lakh dues.

A mill official says they have enough stock to clear the farmers’ dues but adds that all depends on how fast they can sell the sugar. “Whatever the quantity of sale permitted, we have to use 85 per cent sales proceeds to pay farmers. We have sufficient stocks to clear the farmers’ dues,” says Kuldeep Pilania, general man­ager (cane) of Sir Shadi Lal Ent­erprises Ltd. Panwar, however, faults the mills for allegedly creating crisis year after year by withholding payments, mainly to pressurise the government for special packages. “While farmers’ unrest forces the government to provide relief packages to bail out the sugar industry, in the entire process it is the sugar industry that benefits.”

Authorities claim the situation is not so acute this year.  Sanjay Bhoosreddy, UP’s cane commissioner, says all dues up to the last crushing season have been cleared. “For the current season, over 60 per cent of the payments have been made to the farmers so far. In the next couple of days, up to 70 per cent of the payments would be made,” he says, claiming it to be the best record of payments made in several decades. According to Bhoosreddy, at least 93 mills in the state have received the central government’s soft loans and have already started transferring money to bank accounts of farmers.

However, not all are too enthused by the Centre’s conditions for availing soft loan. Raju Shetti, a Lok Sabha member from Maharashtra and leader of the Swab­himani Pak­sha, is highly critical of what he says are “too many restrictions and conditions” for availing the soft loans. He adds that some ofthe mills have paid the arre­ars to far­mers but there are still Rs 5,500 crore unpaid dues in his state. “The main culprit is the lack of incentives for exports, which could have tackled the problem of surplus stocks. The government should help provide guarantee for stocks exp­orted as the payment from overseas sales take time, often one to two months.  No bank is willing to provide loans to support exp­orts,” says Shetti.

Bhoosreddy stresses that despite a government advisory and regulations in place, many farmers do not adhere to the rule that sugarcane be grown only in 60 per cent of their cultivable land as they want to take advantage of the market economics. For farmers, sugarcane makes better economic sense. While sugarcane grown on an acre can bring a net income of Rs 10,000 per month, the same land will give returns of Rs 4,000 for wheat or Rs 2,500 in the case of paddy.

The Glut In  Numbers

By Lola Nayar in Shamli, UP