Art Must Get Off Its High Horse

While the state and patrons sponsor contemporary art, traditional artisans are pitied, exploited or patronised, regardless of their expertise or originality 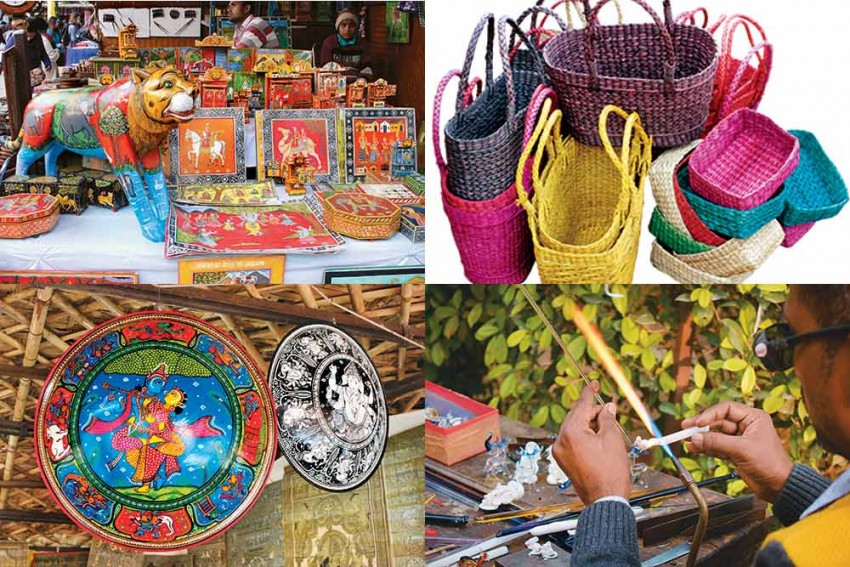 For Arts Sake
Displaced handicrafts at many stalls in Dilli Haat
Jaya Jaitly October 23, 2019 00:00 IST Art Must Get Off Its High Horse

While the state and patrons sponsor contemporary art, traditional artists are still considered supplicants to be pitied, exploited or patronised, regardless of their skill or originality

At the end of the Kochi-Muziris Biennale in Kerala, a full-page article in a national newspaper, Art in the marketplace, presented a detailed description of the history and nature of the event. Terming the three-month festival as an art marketplace raises many questions regarding the nature of ‘cultural’ marketplaces, which must include crafts in its purview. This is necessary to enrich the ongoing argument that contemporary art should not relegate folk art and craft to a secondary status. In this context, many points in the article need challenging, not as a critique of the biennale, but to show distortions in public attitudes towards contemporary artists and traditional ones.

If the popular discourse is serious about ‘inclusiveness’, then installation art, performance art and other such forms of contemporary art expressions should not be treated differently from the art created by craftspeople and artists from traditional communities who can, and do, innovate every day and adapt their age-old skills to a variety of themes and subjects—if encouraged or given the opportunity. Just because traditional artists generally draw themes from a religious or mythological past or craft items related to their belief systems and lifestyles, it does not mean they are unworthy of reflecting on ‘liberal’ or avant garde subjects like dissent, nostalgia, displacement, marginalisation or empowerment. They may choose to represent these from their own histories and knowledge pools. These may be as deep and philosophical as the inspirations of a contemporary artist’s, albeit from a different cultural perspective. Treating them differently from contemporary artists would open the organisers’ and curators’ ‘inclusiveness’ to queries about elitism. 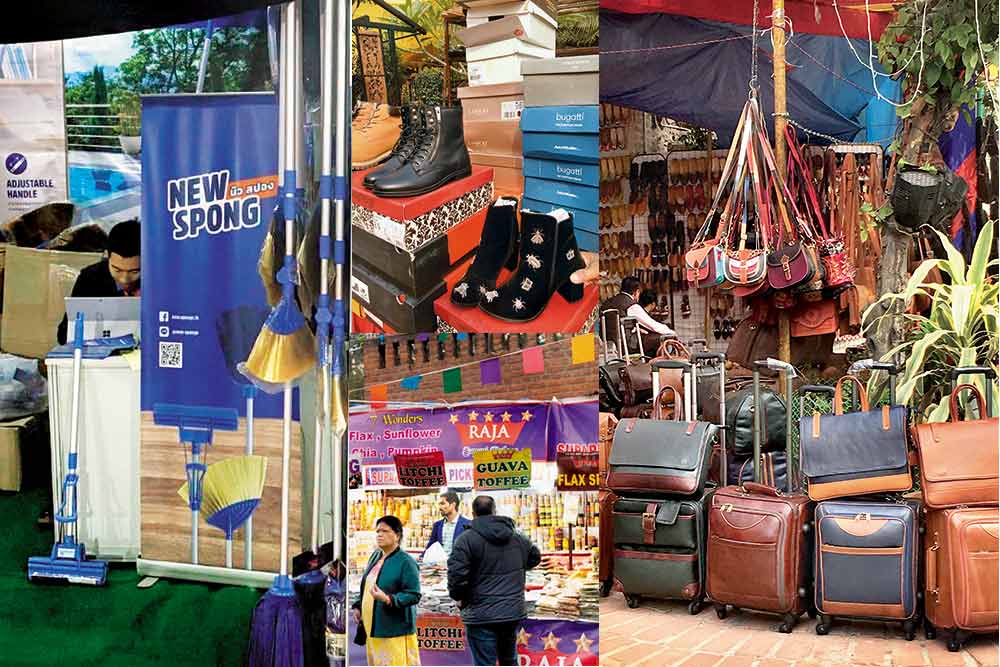 The Kochi Muziris Biennale is held across Fort Cochin, Mattancherry and parts of Kodungallur. This festival of contemporary art is trying, successfully, to pitch itself alongside the Venice Biennale as a must-go place for art connoisseurs across the world. It is already the biggest biennale in Asia. Kerala, which has rich art, craft and dance-theatre traditions going back centuries, was in danger of descending into a morass of philistine architectural constructions from money earned in the Middle East. The sophisticated but simple aesthetic of Kerala’s creative arts was rapidly dying under diminishing support. Houses shaped like guitars replaced the beautiful wooden architecture of yore.

Kochi Biennale arrived on the scene 10 years ago to change local perceptions of art and allow artists bearing historical connections with Kerala to revisit old memories, abandoned churches, synagogues, warehouses and other decaying structures, and create art. It drew in visitors from all categories of society, none of whom had engaged with contemporary expressions or thematic concepts in abstract art. They were offered creativity and forms of expression that sought to compete with biennales across the globe. Even the word biennale would have been completely new to most speakers of Malayalam.

Dilli Haat was set up to help ­traditional artists show their skills and sell their art without middlemen.

There are visible differences in attitudes between those who patronise high art and traditional art and craft. Many consider the latter merely as objects. Take the cultural marketplace, Dilli Haat. It is regarded as an iconic tourist attraction, has been written about in guide books, served as a backdrop in many films and television serials and became a favourite of the general public who, for the first time, could access art and craft in an open, secure and comfortable urban environment. It also offered regional foods, entertainment and a space to encourage egalitarian bonhomie between rural artists and urban customers. It is open throughout the year and hosts a minimum of 150 craftspersons practicing a variety of art forms from across the country. Its rents and maintenance are handled by the Delhi government while the central government is supposed to select the participants. Rules require occupants to be changed every fortnight.

Dilli Haat became a model for an inclusive, economically viable, livelihood-sustaining cultural feature for a city—if run and managed right. The purpose of establishing Dilli Haat was to enable traditional artists and craftspeople to step out of their distant villages to demonstrate their skills, engage creatively, pick up new ideas from customers and sell their arts without middlemen or commissions. When this happened, they flourished. It was, above all, a marketplace providing inclusiveness, opportunity, education and empowerment. If systems are followed faithfully, the marketplace can benefit thousands of craft and textile artists from all over India.

In its early years, Dilli Haat was the most popular hangout spot for young couples and families. Even today, infant visitors in push chairs and the elderly in wheel chairs jostle for space. Tourists from India and abroad don’t miss a chance to visit Dilli Haat and buy gifts at fair prices. The combined turnover from sales at a well-curated bazaar, comprising 180-200 craftspeople, in a fortnight can touch Rs 65 million. The footfall at Dilli Haat during a good fortnight can reach 80-100 thousand, which compares favourably with the Kochi Biennale’s 4-6 hundred thousand visitors over four months. While its establishment 25 years ago cost no more than Rs 20 or 30 million, today it is the second-highest profit-making body for Delhi Tourism at Rs 90 million annually. Artist occupants pay rent for their stall and do not rely on subsidies. The biennale, in contrast, relies on funds from the state government and other patrons to the tune of Rs 250 million. Earnings of individual enterprises at the biennale are not known.

Artists at Dilli Haat pay rent and do not get subsidies, while Kochi Bennale gets funds from the state.

Dilli Haat created space for itself by placing a slab over a wide storm-water drain, covered with a thick layer of topsoil. It can neither be used for heavy construction nor encroached upon. Interestingly, in the name of nostalgia, the biennale boasts of spending money “to keep its venue rundown”. It has also introduced sophisticated themes like “Resilient bodies in the areas of resistance”, which also apply to traditional craftspeople who, despite industrialisation and globalisation, try to keep their skills alive by spending money to step out into an unknown urban metropolis and promoting their heritage.

The state government of Kerala cut funds for many activities in 2018-19 due to the devastating floods, yet it did not cancel funding for the biennale since it believed, rightly, that it was of economic benefit to the state.  It also wisely decided from the very beginning that art spaces must be handled by artists. The biennale is believed to have activated tour operators and local enterprises, and helped people of the state familiarise themselves with art installations. They saw their ordinarily derelict surroundings transformed into an almost surrealistic art landscape.

While ‘art’ is slowly coming out of galleries and going on to bridges, buildings, railway stations and other public spaces across the country, at a popular public space like Dilli Haat, which presents a fair amount of traditional art forms, artists are still subjected to bullying and high-handedness by government authorities and bargaining by insensitive customers. Profit has taken priority, with the Delhi tourism administration performing a sleight of hand to give preferential treatment to traders who are willing to bid online for stalls, paying hefty sums. Artists have no say in any of the administrative decisions and are subjected to disrespect or apathy. Does the difference come from a more enlightened administration in Kerala than Delhi or is it because artists at biennales have a naturally superior status in the elitist public’s eye? The answer is probably a bit of both.

Of the 300 biennales across the world, Kochi’s is considered unique because it is artist-funded. No one gives credit to the artisans of Dilli Haat, who pay rent for their stall and do not rely on subsidies at any stage of their travel, stay or occupancy. Yet customers expect them to reduce the prices of their work. When the biennale, in contrast, ran out of funds, renowned artists came forward to fund it. When Dilli Haat degenerates through bad administration, citizens turn a blind eye instead of raising their voices to complain.

There is definitely a different rhythm built into attitudes towards contemporary artists in society, both abroad, and by imitation, in India. The traditional artist—no matter how skilled and despite a heritage spanning generations—is still a supplicant to be pitied, exploited or treated with a patronising air by urban society. The organisers of the Biennale say their event is not just a cultural event, but an effort to plant seeds in the next generation’s mind. But our attitudes towards craftspersons and traditional artists is not a good one to plant in the minds of the coming generation, especially when they are already distracted by the glitter of malls and the digital landscape.

The author is founder of Dastkari Haat Samiti, which conceptualised Dilli Haat. She has filed a petition in the Delhi High Court against the dilution of Dilli Haat’s original purpose—a marketplace where artists themselves sell handicrafts—and authorities’ bid turn it into a shopping mall of mass-produced goods.

(The author is the founder of Dastkari Haat Samiti, which conceptualised Dilli Haat)

When The Girls Go Marching In