Home  »  Magazine  »  Business  » Take It Back »  Reverse Logistics: A Business Of Goods On Way Back

Reverse Logistics: A Business Of Goods On Way Back 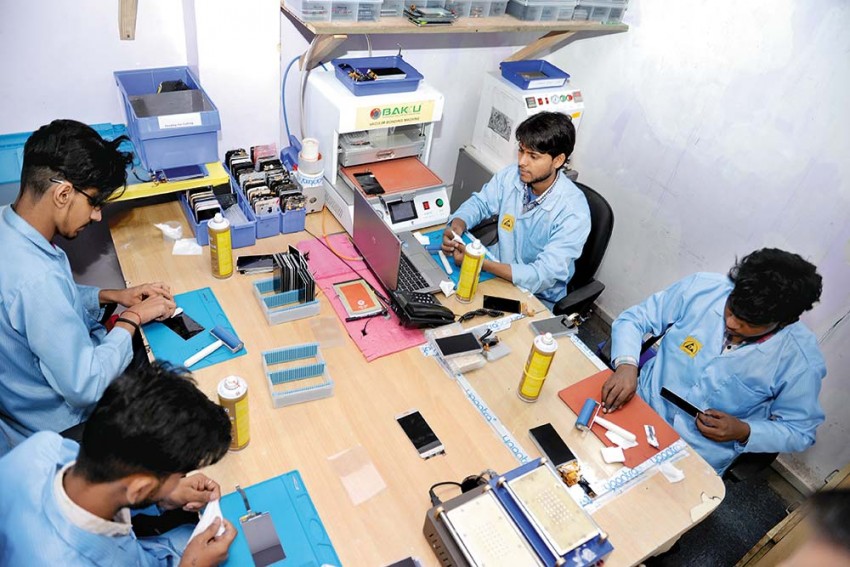 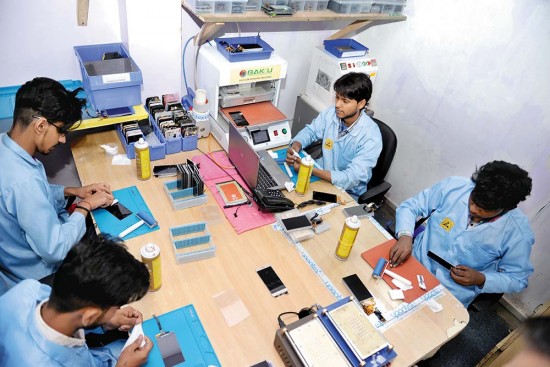 When the dress arrives from Amazon, it’s a size too big. The shoes from Flipkart or Snapdeal bite a bit. The mangoes you ordered from Big Basket or Grofers are not the variety you wanted. You can easily return the stuff—all online e-commerce portals have return or exc­hange schemes. And now, this is big business.

It’s called ‘reverse logistics’ and it is engaging not just young entrepreneurs, but also providing gainful employment across the country. While ‘forward logistics’ means shipment of products to a customer, reverse logistics is the collection of goods from the buyer and delivery to the vendor for return or exchange. Sometimes, it also involves refurbishing the product and prepping  it for resale.

Take 23-year-old Mohamad Kamran, a commerce graduate from a college in Bihar’s Samastipur district. He reaches office around 8 am every day and picks up a list of addresses along with a bagful of packets to deliver. In 2018, having been unable to get a job despite his best efforts for a year and fed up with his family’s taunts, he dec­ided to move to Noida with his cousin. Now, his average workday comprises 20 deliveries and five pick-ups. “This is the first job I landed,” says Mohamad, who joined logistics company E-kart for a salary of Rs 12,000. “It is good enough to meet my expenses, but does not  offer a promising future.”

India’s e-commerce market has been witnesssing a phenomenal growth. With rising competition, e-commerce giants like Amazon and Flipkart, along with players such as Myntra, Ajio and Paytm, are busy acquiring customers by providing discounts and added services. One facility all of them offer is a “no-hassle” return policy, applicable for 10 to 30 days from purchase. The returned goods are sent back to the seller, who restocks, relists or resells these after refurbishing. This is leading to the emergence of the reverse logistics sector, where people like Mohamad are getting absorbed.

According to employment consultancy Teamlease, the logistics sector will create emp­loyment for at least 30 lakh people by 2022. Of this, e-commerce will create at least 10 lakh jobs in last-mile consumer delivery, 43 per cent of which will be in tier-II and tier-III cities and rural areas. Nearly two-thirds of all e-commerce logistics jobs will be generated in Maharashtra, Delhi, Andhra Pradesh and Karnataka.

“The e-commerce industry, which witnesses an average of 19 lakh shipments a day, has given rise to reverse logistics,” says Pirojshaw Sarkari, CEO of Mahindra Logistics Limited. “Customers look for a no-hassle return policy and marketplaces have provided that option. Return shipments are now 15-25 per cent of total shipments. Reverse logistics has definitely become a critical cog in the wheel in the logistics industry as it directly impacts the bottomline of brands.”

For logistics players, the support system for rev­erse logistics is the same as forward logistics, but they acknowledge it’s more time-consuming. Reverse logistics comprises a gamut of activities, starting with the pick-up of the product from the customer and dropping it to the warehouse. There, the returned products are scanned and categorised. While these categories vary from product to product, they largely involve segments like used products and labelling them as L1 (new but seal broken), L2 (used) and L3 (old with defects). While some logistics companies provide this gradation facility, others do not. After gradation, the products are liquidated to either a third party or back to retailers, or auctioned and sold as refurbished products.

Although reverse logistics is becoming an important segment, not all players are getting into the entire gamut of activities. Logistics companies with sufficient capital are expanding their services to packaging and relabelling as well, but some are just confining themselves to the pick-up and drop facility.

Hey Deedee, India’s first all-women logistics company, has also entered the reverse logistics space, but  has confined its operations to pick-ups and drops. “We handle reverse logistics for Amazon and Flipkart,” says the company’s CEO, Revathi Roy. She explains that there are several risks involved in reverse logistics. “For instance, a few weeks ago, we had gone to collect a parcel.  Although it was packed when we received it, on unboxing it at our hub, we noticed that the customer hadn’t returned the same product he had bought,” she explains. The logistics company has to bear the loss in such cases. Ninety per cent of Hey Deedee’s business is forward logistics; just 10 per cent is reverse logistics. 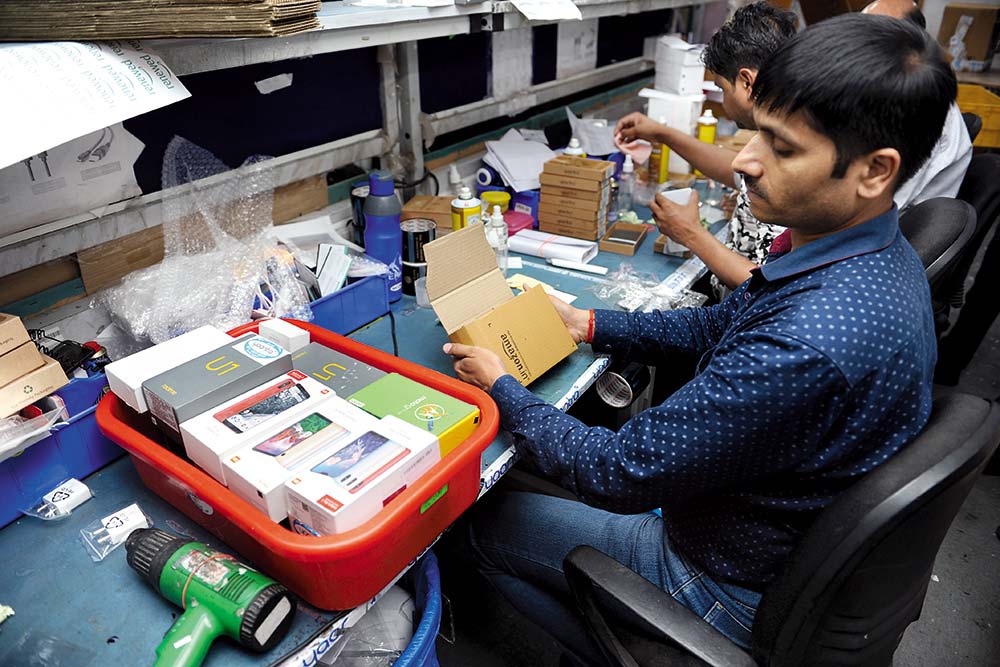 “Right now, the focus is on customer acquisition and competition,” says a senior official from an e-commerce giant. “Everyone is just pumping in money to acquire a major stake in the market. Some are also trying revenue models—membership fee, for instance—to support the return offers, but these are not the focus.”

Sarkari of Mahindra Logistics says, “As e-commerce companies start focusing on the bottomline instead of just gross merchandise value, reverse logistics will play an important role in their profitability.” He adds that the phenomenon has already disrupted India’s $160 billion logistics industry.

“There are many risks. We also bear the losses caused by ­a customer’s mistake.”
Revathi Roy, CEO, Hey Deedee

Interestingly, the price paid for forward and reverse logistics is the same in India, while in Europe and the US, reverse logistics costs more compared to delivery. But in India, since the trade is in its formative stage, logistics companies have less bargaining power. “Reverse logistics is becoming part of our business,” says Sarkari. “It is still at a nascent stage, but we look at it as a big ­opportunity. We plan to grow the business in the near future and, as part of reverse logistics services, we are currently offering transportation and warehousing as well as value-added services like repacking, relabelling, gradation and liquidation.”

The goods sold by e-commerce websites can be roughly divided into electronics and consumer durables. Products like mobiles, television, computers and laptops are generally sold or auctioned to retailers or third parties, while food products, clothes and cosmetics that have been opened become dead inventory.

Reverse logistics in India is also powering the refurbishing economy. While consumer durables like cosmetics and clothes end up at small shops or flea markets, electronic products are being restored and resold by startups. 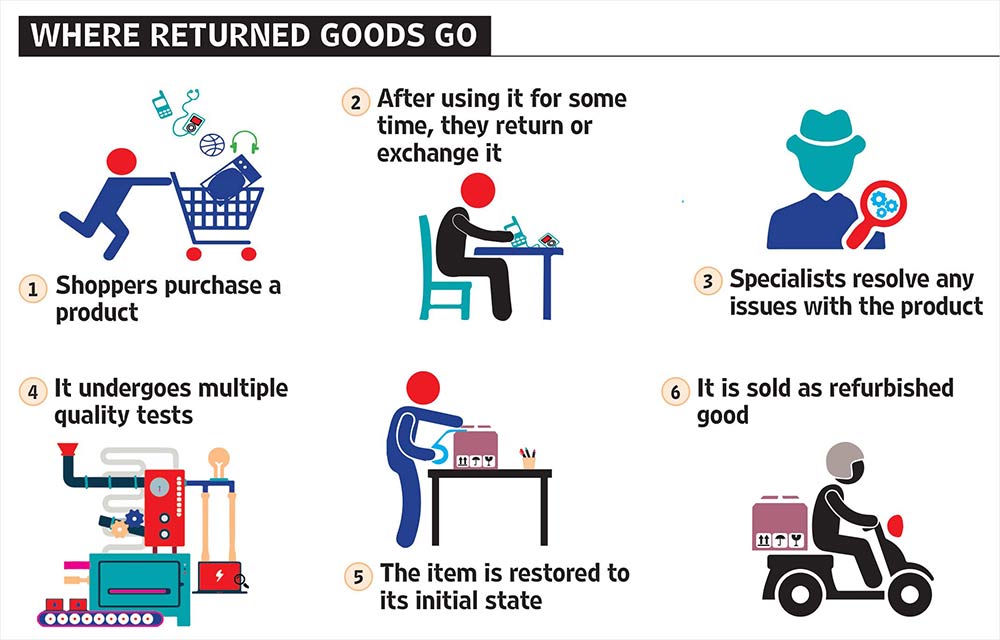 One of the leaders of the refurbishing industry is Yaantra. The company was established in 2013 by three colleagues after they quit their jobs. It started its journey with providing on-site mobile repair facilities, then partnered with Xiaomi as their service provider and finally took over the organised refurbished mobile market in India. The company has outsourced their logistics to a third party, but has a shop floor with a strength of around 1,000 people to repair and restore used phones. In a short span of six years, the company has grown from Rs 2 crore to a revenue of Rs 200 crore. In 2018, it received the “Refurbished ka Badshah” award  from Amazon.

Its cofounders, Jayant Jha (CEO), Anmol Gupta (CTO) and Ankit Saraf (CFO), say that the second-hand product market in India has huge potential as less than one per cent of it is organised and captured. “The reverse logistics and exchange bonanzas that e-commerce websites are providing has created an altogether new market,” they declare. Besides, with smartphone penetration in India at just 24 per cent, there is a huge market waiting to be tapped.

The refurbished and pre-owned phones they sell are available in 300 cities. Price is a significant factor when it comes to purchase of restored phones. The major demand comes from tier-II and tier-III cities like Tiruchirapalli, Salem, Coimbatore and Bijnore, where people prefer to spend less than Rs 10,000 on refurbished branded phones, while the more expensive phones are popular in tier-I cities. The cofounders say that if reverse logistics had not come into play, it would have been a difficult venture as most of the secondary mobile market in India is unorganised. According to a report by Counterpoint Research, India registered the maximum growth of 14 per cent, even as cumulative global markets ­registered a decline in the refurbished smartphone segment in 2018.

Jha of Yaantra says that the gross margin on a refurbished mobile is around 15-30 per cent, while Sarkari claims that the margins on reverse logistics depend on the scope of work and value addition. “It is also notable that not many players are active in this segment as it is still emerging,” Sarkari adds.

Yaantra sells its refurbished phones under its brand name through its mobile app and website, while e-commerce players like Amazon and Flipkart also sell the same inventory under their own refurbished segment. However, the work of refurbishing has been outsourced to other ­companies like Yaantra.

With the logistics sector expected to be one of the largestemployment creators, it will be interesting to see the role reverse logistics plays in India’s job growth story and the new economy it is nurturing.

The Gypsy Voters Of Democrazy