Bush And His Buddy

Musharraf uses his US visit to full advantage, playing to the media and to the gallery 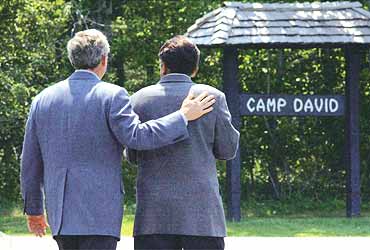 outlookindia.com
-0001-11-30T00:00:00+0553
Did General Pervez Musharraf pull off another coup? Trying to be "with it", and basking in the sunshine of both Camp David and the new relationship, he walked in step with US President George Bush, open collar and all. He thanked Bush not once but twice for the "special gesture", flagging it in bold letters in case anyone missed the fact that he was the first South Asian leader to be invited on a weekday to the weekend retreat.

But it wasn't the symbolism that mattered. It was the substance. In the end, he walked away with a $3 billion economic and military package, a trade and investment agreement and a science and technology exchange after weaving a web of enticement around the Americans. There were no F-16s but there was plenty of other compensation—an additional $75 million in private sector lending to Pakistan will now be guaranteed by opic or the Overseas Private Investment Corporation. Then a five-year "trade capacity-building programme" will be launched by the US department of commerce to help Pakistan grow.

The general's larger aim was to "broaden and deepen" US-Pak relations, making them "predictable" and detached from the chance geopolitical necessities which are here today but can be gone tomorrow. He had persuaded the Americans to give a more wholesome dimension to the relationship than one of a user-client to enable him to fight religious parties back home. His model: India, whom he emulates but grudgingly.

The pattern of agreements, the areas of cooperation, even the names for various bilateral groups, seem to be a copy of contracts created between India and the US. He did make a significant beginning in raising the relationship, using Pakistan's enthusiastic participation in the war against terrorism as a huge bargaining brick. Bush obliged by showering praise on an imperfect ally who found himself in the right place at the right time.

While Musharraf was at it, he blanketed the airwaves, granting interviews to television and radio networks and meeting the editorial boards of major newspapers. Within 24 hours, he had been on abc, Fox News, National Public Radio, cnn and cnn International, spinning journalists with tales of sincerity and declaring how he was empowering every Pakistani from the lowly peasant to the last woman. He reached a crescendo at the US Institute of Peace, an important Washington think tank, where he addressed a gathering of more than 800 people. With no apparent self-doubt, he declared, "The people of Pakistan are with me. I know that. They want me at the helm of affairs."

A veteran South Asia expert sat listening as Musharraf announced that peace in the subcontinent would ensue only if India followed the four-step process devised and delivered by him during the failed Agra summit. No other method would apply. Unable to take it any longer, the expert compared it to a "Bollywood moment"—fantastic yet believable to those in denial. "He is delusional. He talks of people wanting him but who does he talk to apart from his barber?"

Whether or not his people "want" him, the Americans certainly seem to. The $3 billion aid package spread over five years changes the dynamics for Pakistan—from sanctions to satisfaction. The money will come in annual instalments of $600 million and will be evenly divided between economic and military grants, although the details of whether the aid would be "programmed" or free-flowing are still being negotiated, sources said.

Once the Camp David meeting was over, a White House official quickly got down to brass tacks and said US aid would be delivered based on three major criteria—Musharraf's continued commitment to fighting terrorism, move towards democracy and an end to all sales of nuclear technology to "rogue" nations. They are not exactly "conditions" but something close to that.The Pakistani delegation immediately denied any conditionality, reminded as it was of the 1980s when money flowed only after the US president had certified that Pakistan was not making the bomb.

"This time, it might be more like an understanding or benchmarks," commented Teresita Schaffer, a former ambassador and now a prominent South Asia analyst. Although Bush announced the aid package publicly, the proposal must still get formal Congressional approval. A Senate source told Outlook that "there was not much appetite to go to battle with the White House on this one". With Republicans controlling both chambers, there is little likelihood of a roadblock, barring a few arrows from the India Caucus in the House of Representatives. "So far nothing is written into law and if anything does get in, it will be fairly soft," the source said. "But we have to ensure what we are buying is better than the status quo, specially on terrorism. When Musharraf talks of terrorism, he thinks only of Al Qaeda, not of the Lashkar-e-Toiba or the Jaish-e-Mohammad. We are not speaking the same language. Bush failed abysmally in conveying this message."

As for the administration, Deputy Secretary of State Richard Armitage reportedly spent an hour with the general at his hotel armed with maps and documents on terrorist camps in Pakistan. India has given locations of around 170 sites where terrorists are training. Bush also publicly pointed to the "need to address extremism and cross-border infiltration," a formulation closer to India's heart than the general's. He then asked for "a hundred per cent effort" to fight the terrorists. But as a Senate aide pointed out, "it is difficult to quantify whether Pakistan is really moving in the right direction". Some known terrorists like Maulana Azhar are free while others are under "cozy house arrests".

The only condition that Musharraf can and will abide by is preventing any future nuclear sales to North Korea and Iran, the remaining members of the original axis of evil. "Our red lines on those are very clear," said a US official. Musharraf repeatedly said he was "not giving assistance to anyone" to develop nuclear weapons. When asked about Pakistan's missiles-for-nuke operation with North Korea reported by US intelligence last year, the general said it was a closed chapter. "Pakistan will never proliferate to North Korea. We are totally self-sufficient in this area. This is the guarantee to the US. There is no proof whatsoever that Pakistan proliferated."

As for bringing back democracy, the general had only contempt for his country's past experiments. He called democracy every name under the sun—"dysfunctional", "pretence", "mockery". The Bush administration nodded in unison, resting its faith in the one man it sees as an answer to all questions Pakistani. But as Selig Harrison, author of five books on South Asia, warned, the administration's "delicate balancing act" between India and Pakistan could be threatened because of the increasing proximity between Washington and Islamabad. And that couldn't bode well for South Asia.

Innocence For The Insensate