Is the giant's high-growth story over? The industry says it saw the re-rating coming. 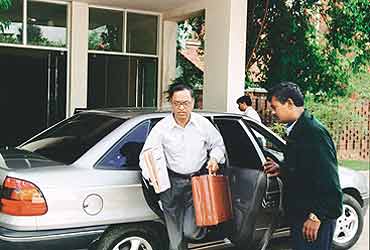 outlookindia.com
-0001-11-30T00:00:00+0553
The trading hours on April 10 signified the end of the hype movie, Software Story, Part I. That day, Infosys Technologies, India's most admired company, fell by over a fourth on the bse. The decimation continued on Friday when it lost another sixth of its value. It was a wipeout that had rarely been seen before. Millions of investors who had been riveted to the tech ticker for years saw their life's savings erode sharply in front of their eyes.

Now, even as we see it real-time, a sequel to this plot is being written: hour by hour, day by day. Welcome to Software Story, Part II, billed to be vastly different from its predecessor. So, clutch your Coke can, grab a carton of buttered popcorn and get ready for a mind-shattering, intensely emotional experience. (Readers are advised to refrain from putting their money into these stocks unless they are reasonably sure of how the drama will unfold.)

What we can do is to give a few insights and a quick preview. It would need an analysis of what's happening at Infosys. That's because it is the software sector's bellwether stock. And whatever happens to it will influence the future course of the industry.

Cut to Black Thursday, when India's largest software firm announced its Q4 results for 2002-03 and provided a guidance for the next year ('03-04). A few critical changes became clear. The high-growth story seemed to be over for Infosys. In its guidance, it said that while its topline would grow at 20-plus per cent, the increase in bottomline will only be 11-12 per cent. Obviously, margins were under intense pressure due to competition, adverse global conditions and the twin impact of Iraq war and sars virus. "The business model of Infosys is sustainable, but all the external factors are not in its favour," explains Jignesh Shah of ask Raymond James.

To put it in context, Infosys said it expects gross profit margins to come down from 53 per cent in 2002-03 to 49.9 per cent next year and profit before tax, as a percentage of revenues, to be down from 36.2 per cent to 32 per cent in the same period. A few analysts see the latter figure stabilising at around 30 per cent over the next few quarters.

Investors dumped the stock as they thought the expected profit growth didn't justify its valuation. "The long-awaited re-rating has happened in Infosys. I expect the stock to settle between 12 and 15 (in terms of price-earnings multiple)," says Pankaj Joshi, senior manager, Singhi & Associates. (Today, the firm's PE multiple—its scrip price divided by its earnings per share—is 15-20, down from the 30-40 band a few months ago.)

But there were other realities that emerged out of the Q4 results. It seemed the good news we had heard about the upturn in the sector—after two years of slowdown—was not having the desired impact. For instance, offshoring was supposed to be the panacea for Indian firms. As global clients outsourced work to India, as opposed to onsite (doing it at their own offices), margins were expected to rise due to lower local costs. And offshoring was taking off in a big way.

Well, not for Infosys. In 2002-03, the share of onsite work increased by a tenth to 33.7 per cent. Infosys ceo Nandan Nilekani says the onsite work went up as his company went for high-value projects in areas like consulting and enterprise solutions, which together contributed 18 per cent of revenues in Q4, 2003. Clients insist that such work can be done onsite. This should be good news as Infosys seems to be going up the value chain.

However, the downside is that more onsite work means higher topline growth, but lower margins. Senior managers in Infosys admit the 3 per cent increase in onsite share resulted in a 2 per cent reduction in gross margins. Worse, the company does not expect this offshore-onsite ratio to change much this fiscal ('03-04).

In the same vein, there was this excitement about Indian firms grabbing large orders—a $160-million bpo contract won by HCL and a $100 million one by tcs. But these too come with riders. Invariably, clients merge both maintenance (low value) and development (slightly higher value) work into these huge deals. And then demand a lower average flat billing rate. Hence, Indian vendors are forced to offer a single low rate, compared to multiple ones where they can cross-subsidise their rates.

More than that, smart vendors dangle the carrot of large future contracts while demanding rock-bottom rates for the initial projects. When the time comes for signing the mega deals, these low prices become the benchmarks. Infosys managers admit that both these factors have squeezed margins.

Then there was this debate about Indian vs Foreign software firms; that the former were in a better position to grab marketshare due to their low-cost offshore delivery model. Surprisingly, in the last few months, global firms like Accenture and ibm have matched rates quoted by Indian firms like Wipro and Infosys. "I have heard of several incidents like that. The fact is that global firms can reduce their rates, thanks to development centres in India," says a senior manager in a Silicon Valley-based IT firm.

So, there's further downward pressure on billing rates and, hence, margins. Infosys still feels it has an edge in terms of costs and delivery. Nilekani says foreign firms can never match the local cost structure; for example, they cannot hire as many employees in India as Infosys has.

Nilekani may have a point there. But one area where his tactical decisions have probably failed is "derisking". At one level, the Indian software sector had decided to spread geographically to reduce their dependence on north America, which has been facing a tech slowdown for two years. But in most cases, including Infosys, the opposite has happened in the past 12 months. North America's share in total revenues for Infosys has actually gone up from 71.2 per cent in 2001-02 to 73 per cent the next year.

We hope readers must have figured out a few home truths by now. Margins can only come down, but on the positive side, there's enough business out there unlike the recent past. "We believe it'll be another year of volumes-led growth," says Vivek Paul, vice chairman, Wipro, whose operating margins crashed to 24.6 per cent in 2002-03 from 33 per cent the previous fiscal and are expected to come down further this year. Nilekani, who thinks getting a 30 per cent volumes growth in 2003-04 is not a problem, admits: "The key challenge is going to be at what price we get these deals rather than what's the deal flow."

The only upside in Software Story, II is that Infosys has invariably bucked the trend, or done better than what it has promised. As a Mumbai-based analyst says: "It's quite a conservative organisation." Hence, there's still a chance that Nilekani and his team might do better than what the Street thinks, or Infosys guidance. If that happens, it might be time to re-rerate the stock once again.