Even the aisles are taken at cabin crew schools. But not every mofussil kid gets to play angel in the skies. 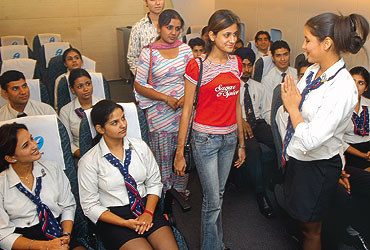 outlookindia.com
-0001-11-30T00:00:00+0553
The Airbus A-300, parked on a desolate spot adjoining Delhi’s international airport, scarcely attracts more than a look from passers-by. Little do they realise what’s going on inside its fat body. Some 30-odd pretty young things, neatly attired in navy blue skirt, scarves and stockings, listen attentively to their teacher Bhavna Tiwari, ex-air hostess, as she conducts a class for these aspiring high-fliers. Many of them are from small towns—places like Ludhiana, Karnal and Meerut—and seem a bit dazed by the new world they’ve been plunged into. Many have never been inside an airplane before. Bhavna chooses six girls to play the cabin crew and the rest of the students are asked to take the role of passengers.

The nervous students shuffle their feet and tug at their skirts, aware of their teacher’s hawk-like eye for detail. One of the girls addresses a ‘passenger’ with her hand on the head rest. Immediately, Bhavna points out: "You have to face him while speaking, your hands by your side or palms neatly folded one on top of the other in front, like this." The teacher gives a prim demonstration. The rest of the session throws up more essential instructions—to what level should a cup be filled with tea or coffee, how to balance a tray while distributing food and, more important, how to deal tactfully but firmly with over-friendly male passengers—the sort of situations described in the hilarious bestseller—Coffee, Tea or Me?—written by former American air hostesses Trudy Baker and Rachel Jones.

Among many other things, the year 2005 will always be remembered as the one when the Indian skies opened up as never before, offering middle-class travellers a multitude of opportunities for low-cost air travel. It will also be remembered as the year that gave thousands of young men and women who dreamt of an airline career the opportunity to reach for the skies. All that’s required is high school education, and a reasonably presentable appearance. Which is why youngsters straight out of school from small towns are flocking to institutions like the Air Hostess Academy (AHA), which has branches throughout India.

According to research conducted by AHA, the demand for cabin crew in the next five years would be around 21,000, more than double of what it is now. Industry estimates reckon that India today faces a cabin crew shortage of about 30 per cent. With as many as eight new private carriers set to start operations from the end of this year, the demand for cabin crew is only going to skyrocket. Sapna Gupta, ceo, aha, says there has been a 40 per cent jump in the job market this year. "Being an air hostesses was never so good," observes a cabin crew member with a leading private airline.

All domestic carriers are offering impressive starting salaries. Air Deccan, for instance, starts off with Rs 20,000-25,000, Jet Airways is a notch higher at Rs 30,000, Kingfisher Airlines promises its passengers "flying models" who get a starting package of Rs 20,000, and Air Sahara has increased salaries of their cabin crew from Rs 16,000 to Rs 27,000 per month. Most international airlines start with monthly salaries ranging from Rs 50,000 to Rs 1 lakh for cabin crew. Says 21-year-old Manish Kumar, an aspiring flight steward at aha, "Working for an international airline would be thrilling. They pay so well, I’d get to see the world and they also have the prettiest air hostesses." Can we say it better?

The proliferation of new Indian airlines and the growing number of international flights has translated into brisk business for various cabin crew training schools. Take, for instance, the Frankfinn Institute of Basic Cabin Crew Training, one of the better known schools in India, which charges Rs 86,000 for a one-year diploma course. Currently, there are some 6,000 students enrolled in its 45 centres across the country—you can do the rest of the math yourself. And Frankfinn plans to raise the number of its centres to 75 by the coming March.

Most applicants to these training schools—only about a third of those who apply are selected after a written exam and an interview—are under the impression that once the course is completed, an airline job is practically guaranteed, and a life of good money, glamour, and unlimited travel is just round the corner. The ground reality is different—only a handful of students realise their dreams. For instance, at Frankfinn, just around 25 per cent of the students manage to get a flying job. Others get absorbed in the hospitality and travel industry. And those who don’t make it into either sometimes end up teaching in schools they were trained at. Considering the amount of money—and hopes—they invest, a desk position at a hotel or a ticket reservation job in a travel agency leaves the students hugely disappointed, to say the least. 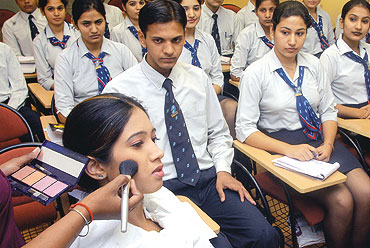 A visit to one of these training schools reveals that many of the students seem to hail from the families of modest means with little exposure to big-city sophistication. They have an uphill task acquiring fluency—let alone the correct accent—in English, and have to be drilled in the rudiments of grooming, such as making sure their shoes are polished and that stockings with runs are a no-no. Sapna points out: "Since this job promises the sky with minimum education qualification, we find a lot of youngsters from weak economic backgrounds and without college degrees attracted by it."

It is also the reason why the schools receive so many applicants from small and medium-sized towns who see this as a once-in-a-lifetime opportunity to widen their horizons. Take the case of Kashish, a seventeen-year-old aspirant from Lucknow, who is currently enrolled at Frankfinn’s Rajouri Garden centre in Delhi. She says that in Lucknow there are lots of girls barely out of school who feel stifled in their hometown and dream of becoming an air hostess. Quite like actress Soha Ali Khan in the film Dil Maange More who leaves her home and boyfriend in pursuit of her dream to fly all over the world. Kashish hopes to get a job with the Royal Jordanian Airlines "as they pay well".

Their dreams are fuelled by the big newspaper ads placed by airline training schools flaunting pictures of former students now with leading airlines. These ads give the impression that airlines come to these schools to recruit. The fact is that most airlines actually recruit through newspaper or website ads, or just by word-of-mouth. When quizzed about this, both Frankfinn and aha clarified that at the time of admission they make it clear to the candidate they don’t guarantee jobs but promise assistance in finding placements. For example, Frankfinn assists its students in their job hunt for 18 months.

School authorities, on their part, complain that most aspirants come with preconceived notions that good looks and height are the ticket to success. That’s no longer true. Sunayna Baruah, a former hostess with Swiss Air who imparts training to cabin crew aspirants in Bangalore, says, "The focus now is on smartness, communication skills and general knowledge." Sapna agrees, "A calm temperament, moderate English proficiency and a willing attitude also go a long way in impressing the interview board."

In fact, Sunayna admits she is often surprised to see girls from places like Tumkur or Mangalore, with "average looks," getting selected by well-known international airlines just on the basis of their inherent personality.

This should not come as a surprise since the newly-launched low-fare airlines, which sell food on board, require cabin crew who are good salespersons as well. In fact, the cabin crew get as much as 10 per cent commission on the sales they make onboard. What is also a new trend is the greater demand for male cabin crew members. According to industry estimates, the demand for dapper young men with crisp accent, a perfect tie-knot and nice-smelling aftershave might just touch 10,000 in the next five years. The ladies are waiting—in the aisles and in the seats.