A sumptuous ride into the North Indian heartland, its quirky characters, colours and concerns and also its wonderful trains and railway platforms. 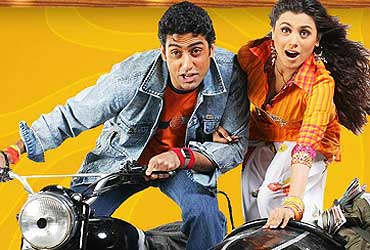 A decade ago he took us on an NRI jaunt across Europe with Raj and Simran, Aditya Chopra (writer, producer) has tried to redefine Hindi mainstream cinema again with Bunty Aur Babli. This time, he takes us to the long forgotten, sleepy small towns. This, no doubt, is the most compelling aspect of B&B. It is a sumptuous ride into the North Indian heartland, its quirky characters, colours and concerns and also its wonderful trains and railway platforms.

The film's small towns, Fursatganj and Pankinagar, are not entirely "backward" but those exposed to the world, thanks to television. Don't expect any deep sociological insights in B&B but there's something heart-tugging in the articulation of the ambitions, frustrations and claustrophobia of the small-town youngsters who want to be Tatas and Birlas. So you have Rakesh Trivedi (Abhishek) who doesn't want to work 9 to 5 but wants to make some quick money. And there's Vimmy Saluja (Rani) who wants to become Miss India than be a Mrs of some head clerk who has been scoring 10/10 in all his exams.

They run away from their small towns to chase their dreams and end up becoming Bunty and Babli, partners in con, who are into crime for the fun of it. To add masala to the proceedings you have a mixed accented (Haryanvi, Bihari, Allahabadi all in one) cop Dashrath Singh (Amitabh) after them. Most of the dupes and disguises get encapsulated in the title song itself. Of course, there's the exquisite sale of the Taj Mahal by minister Phoolsakhi (is Mayawati listening) to a foolish American but it's the only truly rip-roaring episode. Shaad Ali directs his second venture with tremendous surety and elan. Abhishek is perfect as Bunty—naughty, twisted yet unspoilt at heart. Rani plays to the gallery with ease. And Amitabh delivers another starry turn. The scene where he describes his unrequited love affair is a hoot. And so is the brilliant item number Kajrare with Ash letting herself go along with the father and the son. The best bit: in which other film would the hero and heroine meet each other over a deserted bathroom on the railway platform? Go see it.