The success of Aniruddha Roy Chowdhury’s storytelling lies in his ability to convey unspoken emotions. 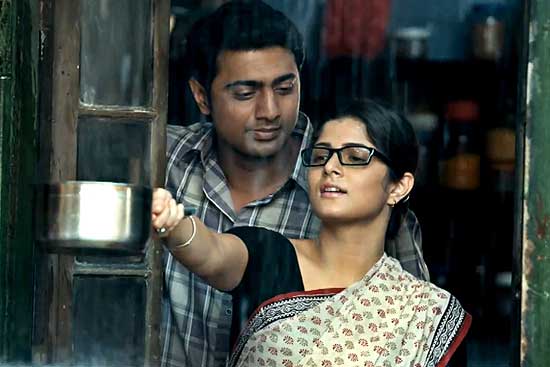 The climactic moment in Buno Hansh (Wild Goose)—based on the book by Samaresh Majumdar—is a personal experience. It occurs at the precise time when your identification with the protagonist is so com­plete that you cannot detach yourself from his sense of utter damnation. It comes when you feel his desperation to retreat from the wrong turns he has taken in life, but realise that it’s too late. It arrives when he asks in bewilderment, “How did this happen to me?”

Amal (Dev) doesn’t ask that in so many words. The success of Aniruddha Roy Chowdhury’s storytelling lies in his  ability to convey unspoken emotions.

When an old friend bumps into him and makes him a job offer at an ‘export-import’ firm, an underpaid Amal, a security guard at a swa­nky mall in Calcutta, finds it difficult to dec­line, as he’s responsible for his widowed mother, unemployed brother and sister-in-law. He cursor­ily, if sincerely, asks his new employers, whom he suspects to be underworld operators, “No harm will come to me for doing this work, will it?”

That question foreshadows the ‘harm’ that unfolds through a racy plot, replete with chases, disappearances, cabaret dances, mafia threats, shootouts and trysts with terrorists. Set in the narrow bylanes, congested ghettos and stuffy liquor dens across locations in Bangladesh, Thailand and India, the film captures the unrelenting oppressiveness of Amal’s life in crime and the irony that his escape route is his biggest trap.

Though it kicks off with a suspenseful shot of Amal and his companion, Rijula (Tanu­sh­ree) trying to smuggle a box of contraband items at a Bangkok airport, the plot takes time to warm up, with a few superfluous shots and some slack dialogues.

The same can be said about Dev’s acting. He needs time to warm up. He delivers his best performance in scenes which depict Amal hitting rock-bottom, like  when he breaks down at the news of his girlfriend (Srabonti)’s going into coma or collapses at Mumbai’s Matunga railway station after being chased by goons. But, intermittently, he lacks expression and emotion in situations demanding passion and drama. Moon Moon is delightful as the sweet-talking mafia ‘Madam’ and Anindyo is Bengali cinema’s most devilish villain. The performances which stand out most are those of Sohag Sen as Amal’s nagging, muttering-­under-the-breath mother and Sudipta Chakraborty, his elder brother’s wife, who cooks, cleans and cribs all day.

The individual contribution of the film’s technical team must be mentioned—cinematographer Harendra Singh creates poetic, dreamlike images and Arghyakamal Mitra’s editing gives it a slick, fast pace. Shyamal Sengupta’s screenplay is sensitive, and Shantanu Moitra’s nostalgic music is set to Anindyo Chatterjee and Chandril’s lyrics. It all blends harmoniously together, so that the few out-of tune notes get drowned out.