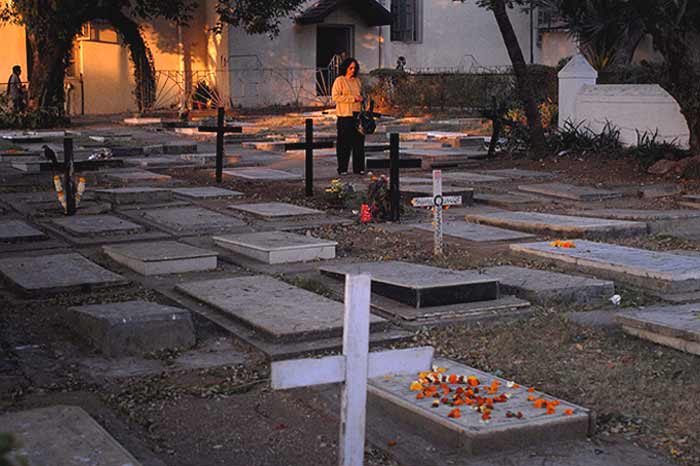 If you want to commune with the who’s-who list of former Bollywood legends, head over to the Juhu Muslim cemetery. Madhubala, Parveen Babi, Sahir Ludhianvi, Talat Mehmood, Khwaja Ahmed Abbas, Ifteqar, Naushad and Mohammed Rafi, all found a final resting place here. But for Asgar Ali Suleiman, president of the Muslim Majlis Trust that manages the graveyard, this celebrity burial ground has become a problem. Due to lack of space, he has had to re-use many of these graves in the last two years. So when star death anniversaries come up, angry fans accuse Suleiman of tampering with their graves. Many of the elaborate headstones have given way to saplings planted over grave mounds. “What can I do? There is just no space,” sighs Suleiman. The modest one-acre graveyard that opened in 1959 has 500 grave plots. The non-celebrity graves have as many as 20-25 bodies buried, in tiers. Moreover, the cemetery has been “renewed” four times by dumping a new soil layer over the existing grave plots to accommodate new burials. As a result, the graveyard has risen by over 15 feet.

The maximum city, always short on space for the living, has even less space for its dead. “We only give out temporary graves now,” says Father Michael Goveas at St Andrew’s Church, Bandra. One of the few churches with a grave plot adjoining it, it handles burials from five other churches in the area and sees close to 25 burials a month. In the suburbs, it is worse. At the IC Church, Borivali, there are only 200 grave plots and there have been 40 burials in the last six months alone. The BMC rules state that bodies can be dug up and a grave plot re-used within 18 months, but bodies can take up to two to three years to decompose. “We encourage parishioners to opt for coffins made from plywood and other cheap wood, rather than teakwood that is neither eco-friendly nor allows the body to decompose as quickly. In fact, three years ago, we had an eco-friendly burial where the body was buried in a shroud,” says Father Barthol Barretto of the IC Church. Some other churches are encouraging simple ceremonies where the body is carried into the graveyard on an aluminium tray and is buried in the grave without a coffin and the aluminium tray is re-used for the next funeral.

The space shortage has resulted in a curious phenomenon in Christian cemeteries: grave niches. On the sides of all the Christian graves stretching from South Mumbai to the suburbs, hollow walls have been erected with cubby-hole vaults. “A vault where the remains can be stored costs Rs 7,000,” says Ronny Pimenta, an undertaker. Among Muslims, the decades-old “otla” system of buying family grave plots is disappearing. Till recently, the Bada Kabristan at Marine Lines allowed families to buy grave plots to hold for generations. But now, this 8.5-acre graveyard is also packed to the brim. Buying grave plots has officially been discontinued though there are murmurs a handsome donation can get one a plot.

As the problem of finding burial sites grows, some communities are looking at new—even radical—ways to work around it. Among Muslims, cremation is considered unthinkable, but some Catholic Christians have started trying it out. The electric crematorium in Mumbai is finding favour with a small fraction of Catholic Christian population as the Vatican is not vehemently opposed to cremations. Father Larry Pereira of the Orlem Church says he oversees two to three cremations a year in Malad and has encouraged the trend. C. Carvalho of the Bombay Catholic Sabha says two of his parishioners have also opted for cremations since their families would rather “pray for their souls than hang on to the loved ones’ material remains”. But for most Christians, cremation is still a new, un-Biblical concept and they would rather stick to the comforts of the traditional burial ceremony. In fact, anyone wanting a cremation has to first seek special permission from their parish priest.

The problem of cemetery space is the worst in areas where the population has exploded in recent years, like the suburbs of Borivali and beyond. “I think there has been a 25 per cent increase in the Christian population because people have migrated from Goa, Mangalore, Kerala and Tamil Nadu and settled mostly in the suburbs,” says Wilfred Pereira, an activist for the East Indian Catholic community. Ronny Pimenta talks about “bodies touching each other” because the grave plots are so close together. “There is a three-acre Oshiwara cemetery, where builders have encroached over one acre by dumping construction debris. In Thane, Christian activists had to forcefully take over forest land for burials because there was just no space,” says Dr Abraham Mathai, general secretary of the Federation of Christian Churches. Christians who are non-Catholic face an even bigger problem since church cemeteries are closed to them. Raymond D’Souza, president of the Maharashtra Christian Association that represents non-Catholic Christians, says: “In Vasai, we were given a half-acre plot, but since it is by the sea, it gets waterlogged and water seeps into the graves.” The government has more or less given up on the problem. Naseem Khan, state minister for minority affairs, expresses his helplessness. “Delegations from different communities have come and met me. Instructions have been given to provide burial space, but these things take time,” he says. But death waits for no one. Most people in Mumbai spend their entire lives in cramped spaces. In many cases, that now goes for the dead too.

Rond De Jambe In A Chouka