Bunking Is Not Allowed 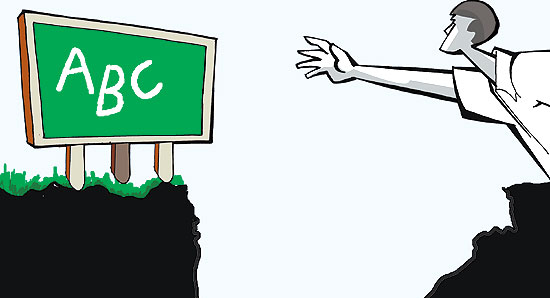 As college admission deadlines loomed a couple of months ago, a former collegemate in Delhi asked me if I knew anything about a design institute in Singapore to which her daughter had just received admission. In turn I called a friend, who is a National Institute of Design alumnus, to ask her what she thought of the design institute. The friend, who runs a design firm, laughed—until that week she had never heard of the Singapore design school, but I was the third person that week to ask her opinion about it.

About the same time, Bangalore papers were celebrating the exceptional SSLC results of the son of an agricultural day-labourer whose mother has supported him on Rs 900 a month through his schooling. His teachers were banding together to help meet his hostel expenses for his higher education.

These two unrelated incidents represent the faultlines of the slow-motion earthquake unfolding in higher education. On the one hand, competition to get into our top colleges and universities is so fierce that a large number of middle and upper middle-class parents, who themselves were happy to go to college in India, are being forced to make huge sacrifices to send their children overseas. The political scientists Pratap Bhanu Mehta and Devesh Kapur estimated on the basis of rbi data that the outflow of money for higher education was in excess of $1 billion in 2006.

If you factor in the fact that as many as 90,000 Indian students are in Australia today and several tens of thousands in the UK, that figure is much higher today. In both countries, little-known colleges that consist of a classroom or two are offering degrees of questionable quality—as British MPs warned in late July after a BBC report—as a path to working in these countries. This may be an employment scam dressed up as an education scam, but some of that demand for higher education is a response to how difficult it is to get into college in India.

The top marks of the agricultural labourer’s son, meanwhile, points to the need for better funding of higher education and hostels for the large number of Indian students who are too poor to afford the luxury of going to college. Instead, we are indiscriminately subsidising college education for the middle class. One alternative, experts say, would be to assess college fees on the basis of what parents paid annually for their child’s schooling.

There is yet another tectonic plate shifting under us, and that is the sheer number of people reaching college age every year—some 20 million. Yes, we need to increase the tiny percentage—just 11 per cent, versus 21 per cent in China, Russia and Brazil—who go to college. More seriously, though, we are laggards on vocational training where fast-growing manufacturing powerhouses like South Korea excelled.

While reservations for IITs and IIMs may garner all the headlines, what this country needs is a huge increase in training for technicians and skilled factory workers. Significantly, in the US, the Gates Foundation is concentrating its firepower on funding so-called community colleges—two-year colleges which allow people to get on the ladder of post-secondary education without huge expense, often even after they have started working. Our companies could both fund such institutes and help hire and train their students; Arcelor Mittal has just such an internship scheme for steel workers in America. Instead of the annual pre-budget conga line of industry groups seeking special favours, the government must redirect industry subsidies and incentives to education and training as a way to help the corporate sector and the country.

As we speed up rolling out private universities, many experts believe we need a SEBI-style regulator, free of political interference, for the task. Tellingly, both the acclaimed school of business set up in Hyderabad and the institute of infrastructure management set up by former IIM director Bakul Dholakia opted for one-year programmes, partly as a way to step around a thicket of tedious government regulations.

How are we to staff the 1,500 new universities India needs just to increase the college enrolment rate a few percentages? Like Dholakia, a generation of dedicated professors is close to retirement age or has just retired. I had the good fortune to be taught by some of them at Delhi University. With the right incentives, they could be coaxed back into education. This applies also to senior executives at IT giants like tcs now approaching retirement—where else is there a reservoir of talent able to cope with educating and training tens of thousands of young people in a very short time?