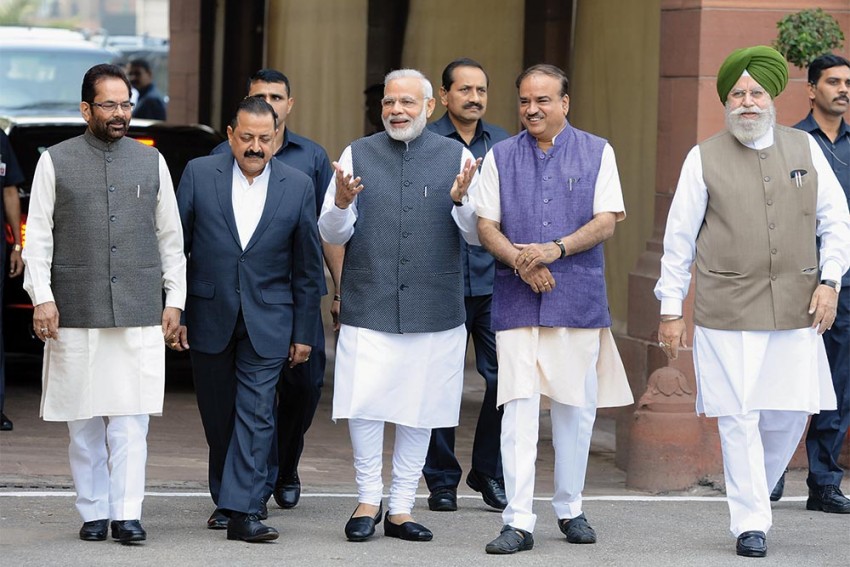 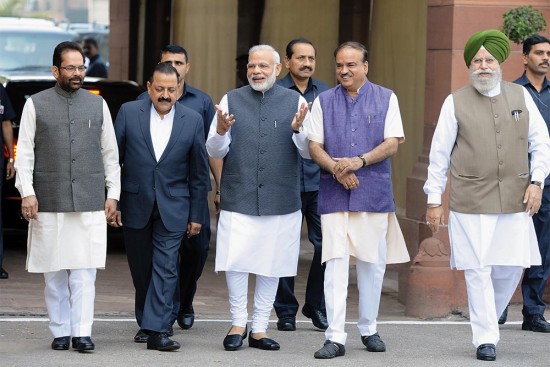 Hoping to make it on time, a senior leader scampered into a meeting of the BJP-led National Democratic Alliance (NDA) in Delhi on November 14. But to no avail. Out of breath, he explained the reason for his late arrival: he had been standing in the queue at the Parliament House branch of his bank to get his demonetised notes exchanged. No one was surprised. Having been through the same experience in the past few days, they ­empathised with the latecomer.

In fact, in causing hardship to one and all, the Narendra Modi government’s demonetisation drive seems to have blurred the great divide—between the haves and the have-nots, the commoners and the powers-that-be. A former cabinet minister may have never visited a bank in the past few decades, but now even he could be spotted queuing up to exchange cash worth Rs 1,500 the other day. It was indeed a rare sight—MPs rubbing shoulders with Class IV employees of Parliament House to get their notes exchanged or withdraw money.

Most NDA members broadly supported the government’s decision, though some perturbed and even panicky voices echoed at the meeting. Similar was the case at an earlier executive committee meeting of the BJP parliamentary party attended by senior leaders such as L.K. Advani and Amit Shah. Talking to Outlook, a senior leader admits that the mood in the party is getting gloomier with each passing day, as the after-effects of the decision become more pronounced. There is also apprehension that the BJP will have to pay dearly in the upcoming assembly elections in UP and other states. “This is not going to be over in 50 days as the PM has promised,” he says. “The queues outside banks may become shorter in a few days, but the economy is going to crawl for months.”

A former minister concurs. He thinks the possible impact of demonetisation on the economy has probably not been properly assessed. “There are dangerous signals,” he says. “It needs to be looked at in detail, especially when industrial output has been only 0.7 per cent in September as per the latest data. The government was hoping for a good agricultural output and implementation of the Seventh Pay Commission to bring back the money in the market but how will this happen if it continues like this?”

According to him, the job market is already in a slump, as are realty and manufacturing, where growth is down to less than 1 per cent. Besides, credit offtake from banks is the lowest in 20 years despite the RBI reducing interest rates on loans. “The Modi government may have made this move for a huge political gain, but it should not forget that Morarji Desai, who went ahead with demonetisation in 1978, was out of power the next year,” says the former minister.

Our government wants to move towards a cashless economy. Great start: No cash in ATMs. No cash in banks. No cash with people. Successful PM!

Apparently aware of the possible backlash, BJP leaders are busy chalking out strategies on how to give it a positive spin. Modi is believed to have told them to go all-out in the attack mode and not be defensive. Some of them tell Outlook that Modi’s message to BJP MPs and allies was clear. “His key message to us is—don’t be on the defensive. Attack the Opposition and expose them for not supporting the fight against black money, corruption and terrorism,” says a senior leader. “He has also asked us to make arrangements in our constituencies to help the people in queues. He wants us to let them know that they are partners in building the nation and the harassment they are facing now is temporary. We have also been told to disseminate the message that an honest person working hard for his living will stand to gain in the long run.”

Modi is also learnt to have asked information and broadcasting minister M. Venkaiah Naidu to ensure that the message is sent across the country through radio and television advertisements. The move may have come in response to apprehensions expressed by party leaders that the Opposition is trying to derive political mileage out of the resentment of the common man. “It is tough but, hopefully, only a passing phase. A new India will emerge out of this effort; it is all for the betterment of the nation,” says the leader, who does not wish to be named.

The general feeling in the party, however, is that steps such as demonetisation are in sync with the strong mandate that people had given to Modi. “Tell the state leaders and party cadre to remind the people of Modiji’s promise—Swachh Bharat, a clean India, in all terms—tann, mann and dhan (body, mind and wealth),” BJP president Amit Shah is learnt to have told the leaders. After all, one of the major pre-poll promises was “na khaoonga, na khane doonga (no corruption under any circumstances)”.

BJP national secretary Shrikant Sharma, however, dismisses the thought that there’s dissent over demonetisation in the party. “This will usher in cultural change; the lifestyle of people will also change,” says Sharma. “Just the way Swachh Bharat Abhiyan will make the next generation see a new India, the mission against black money will rid the country of corruption altogether.”

Sharma believes only the Opposition has a problem with the PM’s move. “Only those who were used to taking commission from scams such as CWG, 2G, defence deals and so on are crestfallen over Modi’s mission,” he says. “What was the need for Arvind Kejriwal to give it such a spin by levelling allegations or, for that matter, for Rahul Gandhi to stand in the ATM line with his security entourage? Both got hooted out.” Many other BJP leaders also assert that Modi’s policy and intention are crystal clear to the voters.

An ideologue closely working with the BJP on policy matters hails Bihar chief minister Nitish Kumar for supporting Modi and wonders why Kejriwal failed to see the green light for his own resurrection. Nitish behaved in a “responsible” manner, says the ideologue who doesn’t wish to be named, and then adds, “What was the need for Kejriwal to drop his own agenda on black money and oppose the move? AAP has, after all, emerged from Anna Hazare’s call against black money. Had he supported the move, he would have attained the position of responsible leadership.”

Since the Hazare campaign in 2009, a huge constituency against black money has been created in India. If handled properly and given the correct spin, hope many BJP leaders, the demonetisation move could actually fetch rich political dividends. On August 15 last year, Modi had announced that  two crore new bank accounts would be opened under the Pradhan Mantri Jan Dhan Yojana. Today, there are 25.24 crore such accounts with Rs 45,302.48 crore in ­deposits. Former MP and BJP nat­ional spokesperson Bizay Sonkar Shastri believes eradication of black money is in keeping with B.R. Ambedkar’s idea of India. “It is a good move. It will fulfil Dr Ambedkar’s dreams also,” says Shastri. “Dr Ambedkar had said industrialisation in rural areas is necessary for the development of villages. So this move will help fulfil Ambedkar’s dreams.”

Many in the party also feel that, over the past 70 years, ordinary people had lost hope for the eradication of corruption. “They never thought that the black money stashed could ever be taken out of the closet,” says Rajya Sabha member C.R. Patil. “Once black money is out, corruption will also come to an end.”