Some leaders and some parties may pay a heavy price for selecting "winnable" candidates. 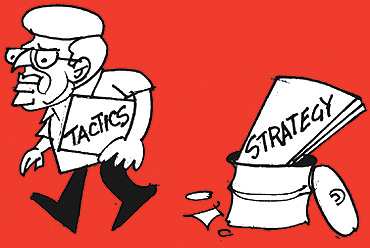 outlookindia.com
-0001-11-30T00:00:00+0553
BJP leader Sushil Pandit reportedly said: "Winnability is the most important criterion while picking candidates." He probably reflected the views of all parties engaged in the election fray. But what is a win? If you win a seat and lose the plot, is it a win? If you win the immediate and lose the future, is it a win? Some leaders and some parties may pay a heavy price for selecting "winnable" candidates.

Ironically, the politician who might suffer most for ignoring this truth is the much vaunted ideologue, Prakash Karat. The CPI(M) leader had built a media reputation of favouring Marxian ideology over political expediency. But look how the scales are falling! Karat is self-destructive not because he opposes the popular policies of his opponents. He is self-destructive because he seems to be rubbishing his own policies. And he is committing this political harakiri in his home state, Kerala!

Karl Marx was passionately opposed to exploitation. Can governments practise corruption without the most blatant exploitation of people? Rooting out corruption should surely be the prime objective of those combating the exploitative capitalist system? But what did Prakash Karat do?

When confronted with charges of corruption in the SNC Lavalin deal levelled against the party’s state secretary Pinarayi Vijayan, Karat rubbished the CBI by calling it politically motivated. He did this even though chief minister V.S. Achuthanandan accepted the need for a probe. In the ensuing struggle between the CM and Pinarayi, Karat backed the tainted comrade to the hilt.

Matters didn’t end there. With his reputation in his own home state in tatters, Karat’s quest to retain his party’s present strength in Parliament became desperate. His desperation drove him to a most unholy political alliance with the People’s Democratic Party led by Abdul Nasser Madani. Forget the communal angle which divides people most viciously to assault the cherished Marxian belief about the unity of the human race. Madani was charged with abetting terrorism. The charges were old, which apparently gave Karat and his closest comrade, Vijayan, the excuse to overlook them. But the anti-terror squad warned the CM that there were fresh suspicions of Madani’s links to terrorism. Achuthanandan said: "We cannot go by the charges raised by the BJP nor the refutation by Madani. Mere public speeches against American imperialism would not make Madani acceptable to society."

Alas, Madani seems acceptable to the CPI(M). Karat has successfully isolated Achuthanandan in the CPI(M). Will he end up isolating the CPI(M) in India?