Only a South Asian confederation might ensure survival of present international borders. Otherwise Pakistan could balkanise. 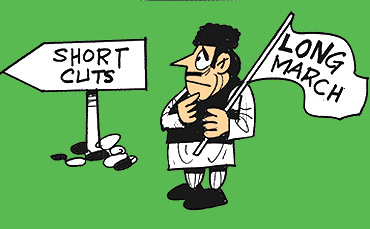 Nawaz Sharif compared his recent protest to 1947. Thereby he diminished his followers. In 1947, present-day Pakistan did little to earn independence. The Muslim League lost the 1946 election in Punjab. The Unionist Party, committed against Partition, won. Its leader Sikander Hayat Khan said that if Pakistan meant partitioning Punjab, he opposed Pakistan. Balochistan, for a full year after 1947, remained independent. Jinnah had argued before the British for Baloch independence. After his death, Pakistan forcibly annexed Balochistan. The most powerful NWFP leader, Khan Abdul Ghaffar Khan, opposed the formation of Pakistan.

The politics of two feuding lawyers, Gandhi and Jinnah, and two UP elitists, Nehru and Liaquat Ali, created Pakistan. None of them knew the ground realities of the territories in Pakistan—its boundaries were actually determined after its creation! The first prime minister, Liaquat Ali, was assassinated in 1951. He was succeeded by six prime ministers in the next seven years. In 1956, General Iskander Mirza took over as president. In 1958, General Ayub Khan replaced him and declared martial law. Pakistan soon became a piece of land owned by its army.

Pakistanis should recall these facts, and be realistic. The participants of Sharif’s Long March acquitted themselves with honour. They earned justice through genuine struggle. They will now cherish freedom. They will fight to retain it. Thanks to terrorism and US pressure, General Kayani displayed restraint. Will army restraint continue? Much will depend on how politicians act.

Military action against the Taliban will succeed only if accompanied by a peace formula acceptable to Pashtuns. That implies Pashtun consolidation across the Pakistan-Afghanistan border. The Pashtun Taliban might settle for legitimised self-governance which has eluded them for centuries. In exchange, they could dump Al Qaeda. One doubts if Pashtuns would then insist on Islamic law for the rest of Pakistan. The Punjabi Taliban comprises Pashtuns settled in Punjab for generations. They seem committed to Al Qaeda and global jehad. But Punjab’s civil society is against them. Already Pakistan has conceded two different legal systems within one country. That is half way towards two nations. The Durand Line Treaty which lapsed in 1993 ceded certain Pashtun areas of NWFP to Afghanistan.

Only a South Asian confederation might ensure survival of present international borders. Otherwise Pakistan could balkanise. On July 2, 1998, in an open letter to Nawaz Sharif, this scribe had predicted this. That prediction stands. This year should indicate whether history will vindicate or falsify it.