The other day I ran into a psephologist. "This general election will be a turning point in India's political history," he said. 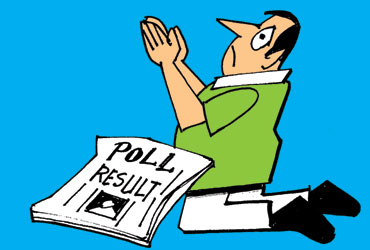 outlookindia.com
-0001-11-30T00:00:00+0553
The other day I ran into a psephologist. "This general election will be a turning point in India’s political history," he said. "From now on, only regional parties will govern India."

"But you said that only a regional party will govern India?"

"That’s right, after this poll both Congress and BJP will become mere regional parties!"

"Oh! Well, which party do you think will succeed?"

"That depends on which party has stronger cadres."

"Well, the BJP is a cadre-based party. People say it has stronger cadres."

"Then Congress is sure to win. Nowadays party cadres always work against their own candidates. Infighting in all parties ensures that."

"What about the Third Front? You think it stands no chance because it lacks a common ideology?"

"You’re wrong," he said. "I rule out the Third Front because it has a common ideology. Every single party leader is committed to the same idea. He or she wants to become the PM! A common ideology is ruinous for Third Front unity!"

"Who do you think has the best chance to actually become PM during the next five years?"

He made a rapid calculation and then said, "In the next five years I think all of them can become prime ministers. Even if each of them gets a full five-month term that will still leave room for a couple of more PMs during the next five years."

"You seem to suggest that India will go through a period of great instability."

"On the contrary, India will go through a period of its greatest stability. Whoever becomes prime minister, it will make absolutely no difference. They are all the same. Things will never change. That will ensure total stability."

"We have already seen Shining India and Achieving India. What can we expect after the polls?" "We’ll get Praying India. More and more people will rely only on God."

Down To Mr One Per Cent