Transparency is the very foundation of justice. Justice must not only be done but must be seen to be done. 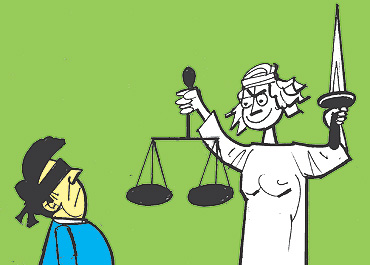 outlookindia.com
-0001-11-30T00:00:00+0553
The pillars of Indian democracy collapsed long ago, save one. The exception was the judiciary. Now that too seems to be crumbling. In November last year, this column had questioned the Chief Justice of India for targeting only the lower judiciary regarding integrity. Specific instances were cited to indicate that the conduct of the higher judiciary was equally questionable. Nothing was done to clear the smell surrounding it.

Now things look even murkier. Under the Right to Information Act (RTI), queries were posed about the assets of Supreme Court judges. The SC refused to divulge the information to the Central Information Commission (CIC) on the ground that judges held constitutional posts and were not public servants. The Delhi High Court bar lawyers disputed this view. Eminent lawyer Fali Nariman pointed out that even in the US judges had to disclose their assets. The judges said that information about their assets could be misused. How?

Transparency is the very foundation of justice. Justice must not only be done but must be seen to be done. In fact, the need for transparency extends beyond the personal assets of judges. Sometimes, even the rationale for court rulings and delays needs to be known. It would help the judiciary’s credibility if many puzzling aspects of judicial conduct could be explained to the public. Right now there is a glaring example that cries for an explanation.

On August 23, 2006, Trinamool Congress MP Dinesh Trivedi filed a petition in the Supreme Court to challenge the constitutionality of the amended law. Arguments were concluded. It seemed the petitioner had a strong case. Had he won, 40 MPs would have been unseated and the government would have lost its majority. On March 5, 2008, the judgement was reserved. Full 12 months have passed; Parliament’s term is over. What good will the judgement do now? Justice has been denied due to delay on such a momentous case. Would the honourable SC explain to the public the reason for such inordinate delay?