In which ISI chief figures out a foolproof method of blocking the Taliban. But he needs Indian expertise and assistance... 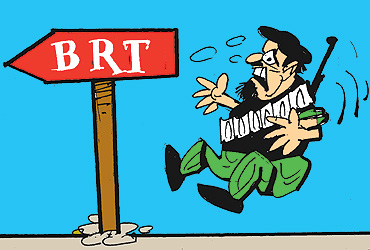 A top-level emergency meeting of Pakistan’s army, intelligence and political leaders was held to discuss the crisis situation created by the Taliban. Despite the government’s brave public face after the ceasefire agreements, official sources expressed grave concern privately. Fundamentalism could spread across the whole country if the Taliban reached out from Peshawar to Islamabad. The meeting was held to explore measures to block the Taliban.

General Kayani expressed confidence that the army could dismantle the Taliban in the frontier province. But there could be heavy civilian casualties, he warned.

This was not acceptable to the rest. "That should be the last option," said Prime Minister Gilani. "Is there no other way to block the Taliban?" He turned to the ISI chief, General Pasha.

General Pasha appeared hesitant. Then he blurted, "There is one way, sir. But I don’t know if it is feasible."

"Out with it, man," Gilani said impatiently.

"Our operatives in India have sent us reports indicating there is a foolproof method of blocking the Taliban. But we will need Indian expertise and assistance," General Pasha looked doubtfully at the rest.

"We are desperate," said Gilani. "What have your operatives found?"

"Well, our operatives closely studied the Bus Rapid Transport (BRT) scheme started in Delhi. It is quite remarkable, sir. If we could introduce this scheme on all roads leading from Peshawar to Islamabad, there is no way the Taliban could reach Islamabad. BRT is a foolproof scheme to totally block movement of all traffic."

"Wonderful," Gilani exclaimed excitedly. "We will replicate it on all highways in the FATA region."

"That won’t be possible, sir," General Pasha said apologetically. "Special skill is needed to make the scheme foolproof. Only Delhi chief minister Sheila Dikshit has that skill. We will have to use her expertise."

"I shall telephone Pranab Mukherjee to get her," foreign minister Qureshi said. "I am sure he will help!" He took out his mobile and went into a corner of the room to make the call. After Pranab verified that it was not a hoax call, he promised to help. "I’ll get back as soon as I’ve had a word with Sheila Dikshit," Pranab told Qureshi.

But Sheila Dikshit was not to be found. Finally the police located her. Her car was stuck in the BRT traffic. "Don’t worry," the police told Pranab. "We are confident of getting her out within seven days."

A Little Naval Battle On Land