The crisis is not economic. Therefore, fiscal policies to protect globalisation won't suffice. The crisis is moral. 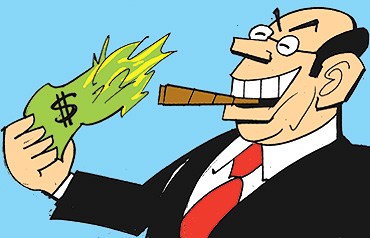 outlookindia.com
-0001-11-30T00:00:00+0553
From Enron to Satyam stretches a long line of corrupt businessmen who defrauded the world. Even legitimate big business consists mainly of bankers and big executives who were criminally negligent as they made millions jobless while fattening themselves on big pay and perks. Together they created a mega-crisis of capitalism. Big governments and big politicians spent the hard-pressed public’s money to bail out big business. Collectively, the politicians and businessmen brought about the global economic meltdown and the world’s biggest economic crisis in the last 100 years. So, what is the solution?

For a start, let us recognise that the crisis is not economic. Therefore, fiscal policies to protect globalisation won’t suffice. The crisis is moral. Current capitalism failed because it was subverted by human greed. Big business and big politics teamed up to acquire absolute power. And absolute power, as Lord Acton observed, corrupts absolutely. How then might human greed be contained? Only a messiah or prophet or saint can alter human nature at the societal level. To summon a saint is not in our hands. One may rely only on systemic change to contain human greed.

What does history teach us? Soviet-style state capitalism failed against the democratic West’s market capitalism. It failed because Communist leaders wielded dictatorial power over the public they claimed to represent. Dictatorial power corrupted them. The system failed. In democratic nations, authority was more accountable. That is why capitalism prevailed over communism. China’s economy succeeds today. Wait awhile. Either its economy will collapse or China will become democratic.

But why has the democratic West’s capitalism failed? It has failed because big business has teamed up with big government to create virtually dictatorial power. It cannot be effectively questioned or challenged. The exponential growth of wealth in a global economy makes money invincible. Money influences elections. Money controls mainstream media. Big business has the money. Big business can sway politics. Politicians need businessmen. Businessmen are allowed to splurge as they please.

How might this be checked? Not by discarding capitalism but by democratising it. Business and industry in market economies must become democratic. This can be done by expanding the base of ownership, by making decisions transparent, and by making business heads accountable to employees. In other words, employees must get part of ownership and a share of profits. Major board decisions must be made transparent to them. This should dilute dictatorship in business. It should contain greed in capitalism.

'Work Allocation... It's On Whims And Fancies'