Do politicians in the name of patriotism or 'cultural purity' have the right to impose their values on the private lifestyles of citizens owning different values? 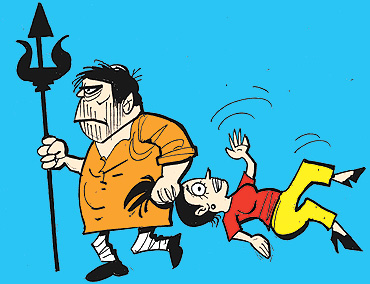 Today, the situation is different. Some days ago, forty men barged into a Mangalore pub and dragged out half a dozen girls to thrash them. They did this to protect their version of Indian culture, which the girls violated by visiting pubs. Media highlighted the incident. Pramod Mutalik, president of Sri Rama Sene, the organisation whose members assaulted the girls, alleged a political conspiracy to defame Karnataka’s BJP government. Mutalik endorsed the aim of the hooligans. He said that girls visiting pubs ‘took drugs and danced nude’ to violate Indian culture. He denied he was linked to the BJP. But he acknowledged that common faith in Hindutva made him the BJP’s ideological buddy. Mutalik has 48 criminal cases pending against him.

The BJP was tardy in condemning the incident. Eventually BJP president Rajnath Singh deplored the ‘hooliganism’ displayed in the incident. But implicitly he endorsed the goal of protecting Indian culture. Next day, Rajasthan’s Congress chief minister Ashok Gehlot was more explicit. He deplored the destruction of Indian culture by boys and girls visiting pubs and holding hands in shopping malls.