Now the US is also taking to cricket. So, will the Rockefellers one day replace the Ambanis and Wadias? 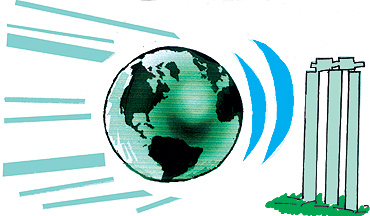 The idea of a Twenty20 series came from Subhash Chandra, boss of Zee TV. He failed to get telecast rights to the 2003 World Cup and the 2006 ICC Champions Trophy despite making the highest bid. So he created the Indian Cricket League (ICL). An ICL official explained: "They denied us the cricket content, so we had to create our own content." Kapil Dev was recruited to give ICL its cricketing face. ICL started with a billion rupee corpus. Prize money for the winning team was a million US dollars.

Most national cricket boards threatened Test players with bans if they joined the ICL. Former Pakistan skipper Javed Miandad could not understand why. Nevertheless the Pakistan Cricket Board didn’t relent. Australian star Adam Gilchrist supported the ICL. He wanted to end the International Cricket Council (ICC) monopoly. Australian coach John Buchanan advised the ICC to stand up to the BCCI and help cricketers. They were ignored.

The BCCI sacked Kapil Dev as chairman of the National Cricket Academy because his association with ICL revealed a "conflict of interest". The ICC, mindful of the money generated from a billion-strong India, refused to recognise the ICL unless the BCCI recognised it.

The BCCI started its own Indian Premier League (IPL) for staging a Twenty20 series. The Australian, English and South African cricket boards supported it. It was a huge success. The BCCI had opposed the ICL for "commercialising cricket". Presumably, the IPL import of scantily clad pom-pom girls as cheerleaders from abroad was not commercialisation. The BCCI treasurer also obtained a franchise of one IPL team. Presumably, that wasn’t misuse of office.

The ICL went to court accusing the BCCI of interference with recruitment of its players. The Delhi High Court ruled in favour of the ICL. The Monopolies and Restrictive Trade Practices Commission (MRTPC) sought an investigation into BCCI’s action against ICL players. But the BCCI had too much clout. Politicians Sharad Pawar, Laloo Yadav, Arun Jaitley and Rajeev Shukla are BCCI officials. The IPL teams are owned by tycoons including Mukesh Ambani, Bombay Dyeing and the GMR group. The struggle wasn’t between good guys and bad guys, but between strong guys and stronger guys. Sharad Pawar didn’t attend the UPA-Left meeting on the nuclear deal. Instead, he attended a cricket meet in London.

Now the US is also taking to cricket. So, will the Rockefellers one day replace the Ambanis and Wadias?