Public opinion polls show that George Bush is among the most unpopular presidents in US history. Is he now making a final spurt to cover lost ground? 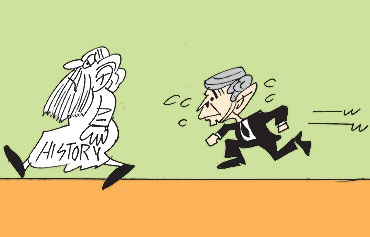 In September 2006, this scribe wrote: "There have been persistent reports of Osama-sightings in areas close to Xingjian. Osama’s safest sanctuary is in China. It should be recalled that representatives of China’s People’s Liberation Army (PLA) had met and struck a deal with Osama. Osama was to restrain an Uighur uprising in Xingjian. In return, the PLA had agreed to build the communication network in Afghanistan which was then ruled by the pro-Osama Taliban. The MoU was signed on the 9/11 day itself. Nothing has happened subsequently to suggest a weakening of ties between Osama, the Taliban and the PLA. Debka File, an Israeli intelligence website, reported a strong Al Qaeda presence in Xingjian’s border town of Kushi, where Al Qaeda cadres have been absorbed by Uighur Muslim extremist cells."

Two years ago this scribe could conjecture this, and Debka File could pinpoint Osama’s hiding place. Rest assured that the CIA was then much better informed. Why has the CIA only now released its information? Logically, it portends action to get Osama. If so, why belatedly? Politics breeds cynicism. Wouldn’t a successful operation against Al Qaeda between now and September dramatically improve electoral fortunes for the Republican Party in November’s US presidential poll?