The New Year has started significantly. Rahul Gandhi has emerged as the elder statesman of South Asia. 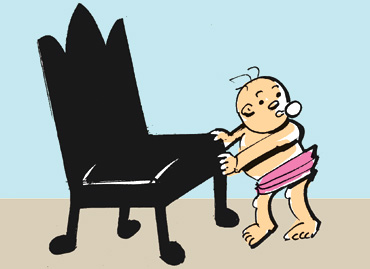 outlookindia.com
-0001-11-30T00:00:00+0553
The New Year has started significantly. Rahul Gandhi has emerged as the elder statesman of South Asia. One hopes that Bilawal Bhutto Zardari, all of nineteen years old, will not dispute this. The coming year will also witness a period of unprecedented stability. Stability prevails when things don’t change. In India, things seldom change. Now they may never change. How can they, when the baton is being passed to a new generation of sons and daughters carefully groomed by parents to continue the tradition? We have always believed in change with continuity. That’s why we change faces. That’s why we continue with the same families.

Thousands of years ago, India perfected the caste system. Whole communities were frozen in the same vocations and status. This provided stability. Carping critics unfairly called it stagnation. Now the process has been further refined. Why freeze only castes? Why not all ruling families? The unfolding year should show us the wonderful stabilising results of this.

Sonia Gandhi’s son has his work cut out for him. He must retain the centrist slogans of economic reform. He must resist the radical slogans of socialist reform. Mulayam Singh’s son voices them. This may not be as easy as before. Mulayam’s son will be helped now by Chandra Shekhar’s son who joined his party and won the Ballia Lok Sabha constituency vacated by his father. But worry not: Sonia’s son will be ably assisted by Rajesh Pilot’s son, Murli Deora’s son and L.M. Singhvi’s son.

Dealing with the sons and daughters of Opposition leaders may be even tougher. How will the Congress sons influence Badal’s son to end allegations of Congress corruption? Hopefully, the trickledown effect of the dynastic principle may help Congress sons. Charu Mazumdar’s son taking over the CPI-ML may not create a problem. But what about the sons of terrorists who have taken over from their fathers? According to the police, Khalistani terrorist Tarlok Singh’s son is leading the terrorists today. How will Badal’s son handle this problem? Will he telephone K.P.S. Gill and say, "Please Mr Gill, do you have a son...."