In these depressing times of widespread dishonesty there remains at least one politician transparently honest: Deve Gowda. 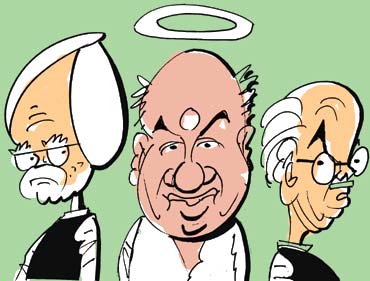 outlookindia.com
-0001-11-30T00:00:00+0553
The BJP-JD(S) coalition saga produced one great result. It succeeded in revealing to the world that in these depressing times of widespread dishonesty there remains at least one politician transparently honest. One refers, of course, to Deve Gowda.

He had a pact with the BJP to relinquish power midway in the Karnataka coalition government’s tenure. He did not do so. He said that the BJP was converting Karnataka into a laboratory of Hindutva. Therefore, he would not surrender power to the BJP. Instead, he tried to forge an alliance with the Congress. According to an unconfirmed version, the Congress told his partymen that it would consider an alliance with them minus Papa Gowda and Son CM. According to this account, it so infuriated Papa that he retorted, "Before making such demands, why doesn’t Congress first get rid of Mama Sonia and Son Rahul?"

After this rebuff, Gowda went back to the BJP showing readiness to honour the original power-sharing agreement. So now did he find the BJP worth supporting, journalists sarcastically asked? Of course not, he exploded. I am against both the BJP and the Congress. Then why support a government led by the BJP, asked the bewildered scribes? Because otherwise, he explained patiently, his party would split and disappear.

Isn’t such candour refreshing? Please note the total absence of reference to a common minimum programme, or stability, or saving the exchequer the cost of a mid-term poll, or the interest of Karnataka state, or maintaining the coalition dharma. This is the kind of stuff that leaders like Manmohan Singh or L.K. Advani would spout. Not Deve Gowda. Shouldn’t we thank him for not trying to mislead us?

While Gowda speaks the truth, he doesn’t speak the whole truth. He forgot to mention, for instance, that he believes only in opportunism and is interested only in assuming power. But, in his defence, surely he has said enough for us to deduce that. He credits the public with some intelligence—which is more than can be said about other leaders. Such refreshing lack of hypocrisy is perhaps traceable to Deve Gowda’s earthy, rustic horse sense. Farmers can call a spade a dratted shovel. It may be recalled that once someone complained to the late Devi Lal that he was helping his sons prosper. "And what exactly should I be doing," retorted the former deputy PM, "help your sons prosper?" That shut up the complainant pretty quick.