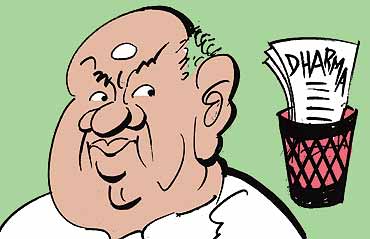 outlookindia.com
-0001-11-30T00:00:00+0553
In earlier days, the popular refrain was: "The coalition era has arrived!" Now we hear a petulant wail: "Why can’t politicians respect the coalition dharma?" The frustration is understandable. The UPA alliance has made India the laughing stock of the world. The BJP-JD(S) alliance has made politicians the laughing stock of the country.

When the time came according to prior agreement for Karnataka chief minister Kumaraswamy to transfer power to the BJP, he twisted, squirmed and contorted but would not honour his word. Eventually, Papa Deve Gowda explained why. "The BJP was converting Karnataka into a laboratory of Hindutva." Papa and son waited for the right moment to expose the BJP. When was that? Why, when the time came to hand over power, of course!

The UPA coalition has been publicly quarrelling for over a year. The Left doesn’t want the Indo-US nuclear deal while the Congress does. Almost every week for the past year the Left has threatened to let the government fall. But only the Left’s reputation among its staunchest supporters continues to fall. Until last week, when the PM capitulated. Now both parties look silly. Next meeting? October 22! Worse than failure of the coalition dharma is the resultant failure of the Constitution dharma. Politicians, media and even judges have misinterpreted the Constitution to distort the system beyond recognition. For instance, the Left supported by muddle-headed jurists argues that the government cannot sign the deal without parliamentary approval. The US example is cited. Its president must obtain approval of the US Congress to ratify international deals. But the American president has a fixed term. He can be removed only through impeachment.

India has a parliamentary system. Parliament cannot interfere in the executive’s functioning. If an international deal is unacceptable, Parliament can vote the government out of power. That prospect made the Left comrades sweat. So they made a mockery of the system by dictating to the government whether or not it can talk with the IAEA. And this grotesque distortion of the system doesn’t raise a single eyebrow among our wise jurists.

Why be surprised? Didn’t the Supreme Court itself dismiss the petition challenging Deve Gowda’s right to become PM as a non-MP? That amazing judgment led to Gowda as leader of the Lok Sabha being unable to even vote in parliament. But Gowda continued as MLA for some time after becoming PM. So he flew to Karnataka to vote in the assembly! With such Constitution dharma, why fret over coalition dharma?