Recently, Sonia Gandhi lectured at the Nexus Institute in the Netherlands. This is what I had imagined she would say. 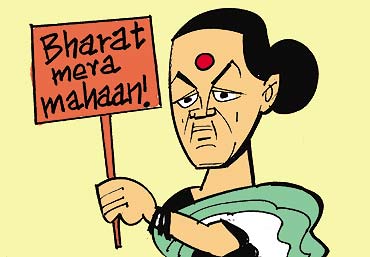 outlookindia.com
-0001-11-30T00:00:00+0553
Recently, Sonia Gandhi lectured at the Nexus Institute in the Netherlands. She spoke on ‘Living Politics: What India has Taught Me’. Excerpts of her speech were published in Indian newspapers. After reading them, I was hugely disappointed. It was a good speech but quite humdrum. Didn’t Mrs Gandhi realise that in Europe the name Gandhi is associated with total truth, transparency and candour? I had expected her to make a very different kind of speech. This is what I had imagined she would say:

"Friends, once I too was a European like all of you. But living politics in India has made me different. I married an Indian and got sucked into India. My husband was the Indian prime minister’s son. Neither his marriage nor the marriage of his younger brother was arranged by the parents. The first thing I learnt was that a white skin is worshipped by the tallest to the humblest Indian. Why, even Indira Gandhi treasured a white skin. Otherwise why did she favour me instead of my sister-in-law Maneka?

"In these circumstances, a European becomes a natural ruler in India. The nation is full of castes and communities that distrust each other. Only a white foreigner is considered impartial and above caste. That was why the British could rule India. That is why I rule India.

"I also learnt that politics without corruption is impossible. Elections are invariably fought with black money which is illegal. Some politicians are more tainted, others less tainted. But an untainted politician is rare.

"I learnt that Indians greatly respect legality. That is why they are embarrassed by politics that reeks of corruption. Fortunately their ancient wisdom has found a solution. They invented the CBI. All cases of political corruption are handed over to the CBI. The CBI invariably discovers insufficient evidence of corruption. Corruption gets thereby a legal burial.

"I also learnt that Indians have a strong commitment to family values. Translated into real life, this means dynasties. Every single person builds his own dynasty. Children love Daddy and Mummy. Parents love Babloo and Babli. Dynasties are born.

"Finally, I experienced India’s seductive culture. That is why over the years, in thought and deed, I have ceased to be European. I am now fully an Indian. That is bad for my popularity. Indians love Europeans. They dismiss Indians. Since now I cannot help thinking and acting like an Indian, I fear I may gradually lose my hold on India."

An Alien In Your Home