A lame duck Bush? He may do nothing. He could do everything. Don't write him off. Not yet. 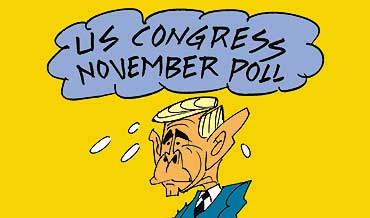 outlookindia.com
-0001-11-30T00:00:00+0553
President Bush is the driving force behind the Indo-US nuclear deal and closer Indo-US ties. But in the US, his popularity ratings have plummeted to an all-time low. So will he be a lame-duck president who can’t deliver? Not necessarily. Recent events indicate the possibility of a dramatic upswing in his fortunes. Consider how and why.

Bush made a surprise visit to Iraq. On the surface it was inspired by the death of Iraq’s Al Qaeda chief, al-Zarqawi. The actual reason could be Iraqi premier Nuri al-Maliki’s success in forming a cabinet uniting Shias, Sunnis and Kurds. The deputy premier and defence minister is a Sunni, Salam al-Zawbai, and the second deputy premier and interior minister is a Kurd, Barham Salih.

The new Iraqi government made overtures to Iran. That indicates approval of the Iraqi arrangement by both US and Iran. The quiet US-Iran dialogue seems to be succeeding. Prospects of settling the Iran nuclear issue also appear brighter. This became possible due to the cooperation of Russia and China.

Chinese President Hu Jintao’s recent visit to Washington was a fiasco. But the setback was illusory. The substance lay in Hu’s next stop in Saudi Arabia. China signed a spectacular energy deal with the Saudis. Saudi ties with the US are close. The Bush family ties with the Saudi royals are closer. Would King Abdullah have signed that deal without a nod from Bush? The China-Saudi deal made Hu less dependent on Iran. That allowed closer US-China cooperation in restraining Iran’s nuclear ambitions.

In mid-June, Saudi foreign minister Prince Saud-al-Faisal visited Iran. He carried a message from King Abdullah to Iran’s supreme leader Ayatollah Khamenei. It was in response to Khamenei’s message to King Abdullah two months earlier. Prince Faisal also met President Ahmedinejad. Khamenei said Iran and Saudi Arabia were satisfactorily cooperating on regional affairs and in Iraq. Both nations would end conflict between Shias and Sunnis. Did this result from behind-the-scenes US diplomacy?

The combined pressure of Saudi Arabia, Iran and the new Iraq would be irresistible for the Palestinians. US pressure on Israel is already visible. A new Middle-East order heralding stable peace appears possible. This would be a tremendous achievement.

President Bush has four months before the crucial US election to Congress. In this time, he can also clinch the Indo-US nuclear deal, and neutralise the Al Qaeda in Afghanistan. He may do nothing. He could do everything. So don’t write him off. Not yet.