Sonia Gandhi and Dr Manmohan Singh are working tirelessly to bring BJP back to power, but then there is BJP's L.K. Advani... 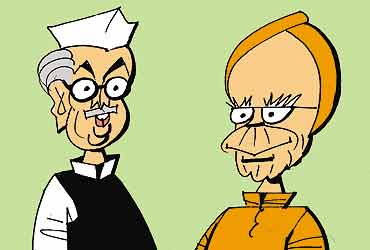 The BJP might actually return to power! Some leaders are working tirelessly to make this happen. They know that thanks to the RSS, the BJP will always remain a Hindutva party. The only way to bring it back to power would be to create a tremendous Hindu wave. This is what they are trying to achieve. Oh yes, I almost forgot! These leaders are of course Sonia Gandhi and Dr Manmohan Singh.

They took measure after measure to help the BJP. They defied the courts on the IMDT Act in Assam, on Aligarh Muslim University in UP and on Muslim reservations in Andhra Pradesh. They attempted a Muslim headcount in the army. They played politics with the Godhra commission report. They did everything to create a Hindu backlash.

Recently, they created a new Ministry of Minority Affairs. Abdur Rehman Antulay became the minister. What precisely this ministry will accomplish over and above the Minorities Commission remains obscure. Muslims consider this ministry to be a joke. The Hindus consider it to be an affront.

Relations between the Congress and Samajwadi Party (SP) worsen each day as the UP state elections draw closer. So both parties compete with each other to woo the Muslim vote. They outdo each other in stupidity. An SP minister offered Rs 51 crore for the head of the Danish cartoonists who caricaturised Prophet Mohammed. Despite such gross violations of law, he continues to hold office. The central government refuses to proceed against him. Remember, there is a Muslim vote!

By some strange good fortune, India and America made a nuclear deal that took care of India’s concerns. Very briefly, the PM became a national hero. Only the Left and a section of vocal Muslims expressed their rage against the Bush visit and the nuclear deal. The PM got a chance to create a national wave. That would have swept the bulk of the majority vote away from the BJP.

It would have also ruined plans to bring the BJP back to power. So the PM promptly said he would specially address the Left and the Muslims to explain his position. The Congress wanted to win the 20 per cent Left-minority vote so that the BJP could corner the rest.

For those who are desperate at the prospect of the BJP returning to power there is a silver lining. L.K. Advani is going to launch another rath yatra to consolidate the Hindu vote. There is every likelihood he will succeed in creating a Congress wave.