After an uneasy calm, terror returns with a deafening roar Updates 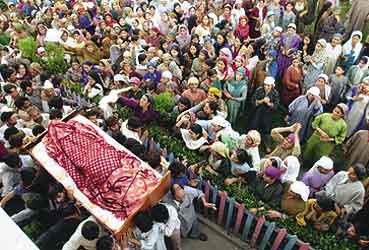 The figures are grim. In the last two weeks, till September 17, there have been 181 terrorist strikes and 15 landmine blasts. Twenty-five security personnel have been killed. Three high-profile suicide attacks in Srinagar have taken the lives of 22 civilians. Another 110 civilians have been killed in other incidents in this period. Security forces, on their part, have killed 97 militants in encounters, killed another 178 attempting to infiltrate the LoC and foiled 13 forays along the International Border. "Confusion and panic has set in among the ranks of militant groups after our operational successes. They are out to prove that they are still in control, but that is not so," says Summanwar.

However, undeterred by the August 30 killings in Srinagar of JeM commanders Ghazi Baba, his deputy Rashid Bhai and his second-in-command Nasir Mehmood Ahwan (killed on September 17), the outfit’s Pakistan-based spokesman, Wali Hassan Baba, is still defiant. "We have formed suicide-bombing squads to kill top Indian leaders. These killings will break India’s backbone," he says.