Bull On The Moon

Profits are booming but the next quarter will determine the trends 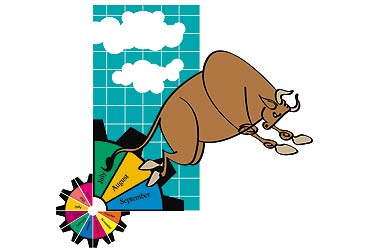 outlookindia.com
-0001-11-30T00:00:00+0553
When it comes to corporate results, the second quarter is normally the weakest one. But when Infosys came out with earnings and profits that beat the street's expectations, analysts realised something unusual was happening in Q2, 2006-07. Their smiles got wider over the next few weeks as other results poured in. Several companies' announced profits were up 50-100 per cent, compared to the same quarter in the previous fiscal. "It shows how analysts had underestimated the growth momentum," says a thrilled Amitabh Chakraborty, head of research, BRICS Securities.

The aggregated results for Outlook's universe of over 750 companies show that quarterly net sales were up over 50 per cent and net profits zoomed by over 300 per cent, in comparison to the same quarter in the previous fiscal. In case of the 30 Sensex stocks, the figures were over 30 per cent and 27.6 per cent, respectively. Says an ecstatic Motilal Oswal, MD, Motilal Oswal Securities, "Out of the 117 companies that we monitor, 54 posted results that were above our estimates, 40 were in line, and only 23 below them. The negative surprises were in auto, engineering and mid-cap pharma stocks." Expectedly, the Sensex continued its bull run, and crossed 13000 points last week.

What stunned experts was the ability of India Inc to blunt all pressures on margins and bottomlines. A few months ago, domestic and global interest rates were up, the stockmarkets in emerging countries like India were recovering from corrections and Indian corporates' expenses on raw materials and salaries were moving northwards. It had to show in Q2 results, but it didn't. "Both volumes and pricing is up, and it has taken growth to another level," explains Ketan Karani, VP (research), Kotak Securities. The twin factors helped companies offset the negative impact of rising costs.

Backed by consistent GDP growth of over 8 per cent in the past few years, demand is robust across sectors. Vishal Khandelwal, who identifies telecom as a major performer, feels "long-term consumption and ever-increasing subscribers' bases especially in tier II towns and rural areas are the key growth triggers in telecom." He adds that the software majors posted "decent volume growth", a clear indication that the "offshoring story continues to gather momentum". In

FMCG, the soaps and detergents category grew 10-12 per cent, and the personalised products rose by 16-18 per cent.

In the case of retail, the compounded annual growth in the past three years has been a phenomenal 46.64 per cent. "Vendors supplying to organised retailers will see tremendous growth. Especially in the logistics segment, where unorganised players will be replaced by large organised ones," says a Mumbai-based analyst. The volumes growth has happened in sectors like oil and gas and auto, which haven't performed so well in Q2. The piped gas segment grew and is "increasingly becoming attractive given India's huge gas reserves". Although Hero Honda announced poor results, the motorcycle leader saw sales actually go up by 3.6 per cent, dispatching over 7.5 lakh units (motorcycles and scooters) this quarter.

However, what has heartened analysts is that manufacturers have been able to raise prices without any effect on toplines. "Seeing manufacturers regain some pricing power after such a long time has been a pleasant surprise," says Chakraborty. The FMCG sector, which was wracked by pricing wars and rising input costs, epitomises this trend. Hindustan Lever, which was engaged in a marketing tussle with Procter & Gamble, hiked prices of beauty soap, Lux, by 7 per cent and 3 per cent in case of detergents like Surf Excel Blue. "Such price increases have neutralised the pressures emanating from rising input costs," explains Sumeet Budhraja, analyst, Edelweiss Securities.

Many firms have also been able to manage their costs. By going in for larger deals—like a $330 million one struck by HCL Technologies with DSG—margins of mainline software firms have suffered as these are typically at competitive and below-average rates. "But winning such deals is an absolute necessity to sustain topline growth rates of 25-30 per cent. It's a toss-up between growth and profitability," feels Khandelwal. Still, the top four software majors—TCS, Wipro, Infosys and Satyam—witnessed a 100-points rise in margins, thanks to "impressive cost controls".

In manufacturing, managements have looked at ways to reduce costs. "A few have shifted production facilities to tax haven states like Himachal Pradesh and Uttaranchal to take advantage of the tax benefits," explains a Mumbai-based analyst. Adds Lalit Thakker, director (Research), Angel Broking, "Due to increasing demand, there has been a large-scale capacity utilisation of almost 95 per cent for many firms. This has taken pressures away from their margins, as it has enabled them to control costs." Says Viral Doshi, equity strategist, Networth Stockbroking, "Many companies have earned incomes from non-core businesses and other ancillary activities, like selling group firms or strategic stake sales."

Another feature in Q2, 2006-07, has been the strong performance by large-cap stocks. Normally, the growth witnessed by large-cap firms is lower than mid-cap ones, because of the higher topline or bottomline base of the former category. "Large-caps have performed as if they are mid-caps," says Karani. This explains why the former stocks have rallied more than their smaller counterparts. The reason, feels Hemang Jani, VP (Research), Sharekhan Securities, is that while "the difference in valuation between large-caps and mid-caps is not significant enough, there's a difference in quality of earnings."

Given these macro and micro trends, analysts are busy upgrading their earning estimates for the next few quarters. Both Motilal Oswal Securities and Sharekhan Securities have upgraded the cumulative average earnings per share (EPS) for the 30 Sensex stocks by 1 per cent. The sectors that are likely to get high upgrades will include FMCG, IT and cement. But the most significant impact may be quarterly and annual estimates in the next fiscal, 2007-08. Sharekhan Securities has already upped the 2007-08 EPS projections for the Sensex stocks from an average Rs 807 to Rs 843.

Still, there are a few concerns. For the past several quarters, corporate earnings have grown at 20 per cent and higher. As the base gets larger, there are apprehensions that it can impact growth rates. Domestic interest rates are climbing, and the recent hike in repo rates by the Indian central bank will further push up interest costs. Global oil prices are down, but there's always the fear they may go up. It's evident the US economy is slowing down as predicted by economists and desired by the country's Fed.

We'll probably have to wait for another quarter before deciphering sustained growth trends.

By Saumya Roy and Shuchi Srivastava